Accessibility links
Cutting The Coax: Living Without Cable TV : All Tech Considered What's life like without cable TV? It's pretty OK if you have a good Internet connection.

About a year ago, I wrote about our decision to end our subscription to cable after 20 years and rely on off-air DTV and online sources for our viewing. (It was the subject of a piece that ran on CNN Money in February, 2009.) 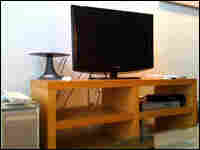 This decision was driven by a couple factors. First, I got tired of paying around $70 a month for access to video content I never watched. I can afford it; I make a lot of money. But what's the "Pleasure Return On Investment" on about $850/year spent on cable? Well, it's unbelievably low, even when compared to something as fleeting as two $200 a plate meals. So, what's the point?

In May 2008, we ended our cable TV subscription.

We kept the cable Internet service because, at 20 MBps, it's the fastest service available in our area. (Unbundling cable from Internet costs an extra $10 a month where we live — trifling.)

We connected an EyeTV USB HD receiver to an unused Mac G5, connected a small antenna to it, and connected the computer to our 32-inch Samsung HD set.

The end result: the EyeTV's included software turned the computer into a DVR for viewing/recording/timeshifting over-the-air content. The computer's internet connection delivered all Internet video. Our DVD player connected us to our Netflix habit.

An important caveat, which I noted a year ago: we're not big fans of live sports and we don't watch a lot of live news on TV. If you fall into either category, you probably won't be happy with the results.

So, in the past year, what have we watched? Nearly everything we wanted to, with a few exceptions, which I'll note below.

Over-the-air: Despite having all the local channels available to us through our little antenna, we've watched only public TV, and our OTA consumption has been almost exclusively how-to shows: Lidia Bastianich, Rick Steves. The computer records them, and we watch them later.

Online: everything else. We watched some episodes of 30 Rock, Family Guy and a couple vintage shows on Hulu. We subscribed to Top Chef and Project Runway on iTunes (after NBC Universal returned). We bought single episodes of cable series like Anthony Bourdain's No Reservations. We subscribed to video podcasts and watched them full-screen on the TV, from Deutsche Welle to TVO to WineLibraryTV to TED to The Cook and The Chef on Australia's ABC. We watched tons of streaming video full-screen, ranging from Frontline and NOVA at PBS.org, to live CBC News from Toronto, Montreal, and PEI, BBC World News, Radio-Canada's 24-hour news network RDI, to live coverage of the Mumbai attacks on Indian TV. And specialty sites delivered tons of great stuff to us — from the aforementioned TED to Fora.tv, among others.

What have we missed? On election night, I wanted to watch live returns from every possible source all at the same time. With cable, this absurd desire is basically achievable. Without it, you're left with ABC/NBC/CBS/PBS and a few online sources. We listened to NPR and watched a variety of video with the sound down.

That's the only time, thus far, where I truly wanted cable. That said, I miss indulging my Barefoot Contessa habit on Food Network. But I had already grown bored of channel-flipping so I was weened off it long before we got rid of cable.

Now, long-term? This is where it gets interesting. I'm not a big believer that all video is going to go online for free, or even in some advertiser-supported manner. I think a fair amount of stuff will stream free with ads. And I think the iTunes subscription model for series is reasonably viable.

What about the rest? I think cable companies will swallow the online distribution model through new set-top boxes that make watching TV and the Internet a near-seamless experience; and second, they'll develop content deals with networks and producers to offer a huge array of stuff either through their own on-demand libraries (disastrous) or perhaps more likely, through Internet delivery platforms that are available only to cable subscribers.

This will add the magic element of "Actual Revenue You Can See On A Balance Sheet" to the online video equation, and most content of consequence will shift here. And again, the new set-tops will make the transition between traditional cable channels and Hulu-style internet delivery basically seamless.

Which means in 5 years, maybe I'll be back on cable again. This has been my theory for the past two months. Two months from now, I might have a different theory. But that's why this is fun, right?

Between now and then, we'll be transitioning to a Mac Mini to reduce the electronic footprint in the living room.

Todd Mundt is vice president and chief content officer at Louisville Public Media. This post was originally published on Mundt's own blog in April 2009.