Accessibility links
How To Install Windows 7 (For Free!) On Your Mac : All Tech Considered How to install the (free) preview version of Windows 7 on your Mac.

How To Install Windows 7 (For Free!) On Your Mac

How To Install Windows 7 (For Free!) On Your Mac 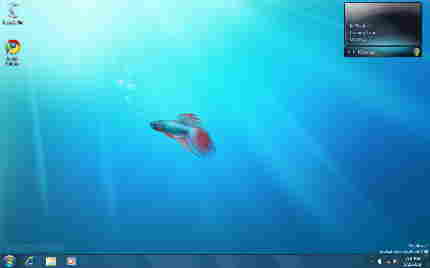 My Windows 7 desktop is spare, but just give me a few weeks. Microsoft hide caption

If you went to your favorite pizza place and tried to order mushrooms and pepperoni and the waiter told you, "I'm sorry but you can't order those two toppings together. You have to pick one or the other," you'd be pretty mad, right?

The Mac versus PC debate has gotten so ridiculous that even normal, sane people who wouldn't care one way or another are now hurling insults and tsk-tsking at family members and co-workers who have either fallen into the fruity Mac OS camp or the stodgy Windows world.

You know what? (Expletive) all that. I say, have the best of both worlds.

Over the weekend, I installed Windows 7 RC, a free, preview version of Microsoft's forthcoming operating system, the successor to Windows Vista. Best of all, it works perfectly well on newer Macs sporting Intel processors. My Macbook, which is two years old, runs it like a champ as a Boot Camp partition. I never thought I'd say this about a Windows operating system again after refusing to upgrade from Windows XP, but from what I've seen so far, Windows 7 is... really good. Fast, pretty and without a single crash so far (knock on wood).

A step-by-step guide to installing Windows 7, after the jump.

Here's how to install it on your Mac in a few simple steps:

That's it. You have a working copy of Windows 7, which will continue to function normally until March 1, 2010.

If you want to switch back to OS X, you'll need to go into Control Panel and look for Boot Camp in order to tell the machine to restart in Mac mode. Once you're back in OS X, you'll have to do the same thing (in System Preferences) to go back to Windows 7. Software like Parallels and VMWare Fusion allows you to run Windows programs while in Mac OS, too. Both can run Windows 7.

Stuck on any steps? A more visual guide is available here.