Accessibility links
Palm Pre Is Pretty Impressive : All Tech Considered Can the Palm Pre rescue Palm from the recycle bin of history? 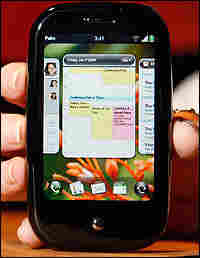 I went for a visit to the Palm offices today in Sunnyvale and I got a preview of the new Palm Pre. The company's hot new smartphone.

Most of us remember Palm from the early days of the PDA when a digital assistant was separate from the phone. (I think I have an old Palm Pilot in the back of one of my drawers.)

Can the Palm Pre rescue Palm from the recycle bin of history?

Well, I have to say that I was impressed with the device. It is small enough to fit in the palm of your hand (pun intended). It has a touch screen and a keyboard. It has 8 GB of storage so it compares to the iPhone in terms of how much music and video you can keep on it.

But, the key to the success of this device will be in the software. What's especially nice about the operating system is that it allows you to keep open an email you are in the midst of writing, while you are also checking your calendar and searching your address book for an email address. Being able to keep three windows open simultaneously is a really nice feature.

Still, I have no idea if this device can rescue Palm, a company that hasn't been at the top in a long time. When they release this device it will only be available on Sprint and that isn't the most popular network. It's hard to imagine that anyone would actually switch over to Sprint just to get a Palm Pre. Palm isn't Apple and doesn't have its loyal following. And as pretty as the Pre happens to be it isn't likely to have the sex appeal of the iPhone.