Accessibility links
Microsoft Cracks Down On Click Fraud : All Tech Considered What do auto insurance and World of Warcraft have in common? One man, according to Microsoft, and the company's suing him for click fraud. 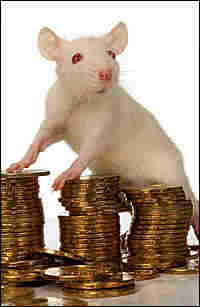 What is click fraud, you ask? Until today I didn't have the foggiest idea. Who are these clicks, and who do they think they are... perpetrating fraud... on all those unsuspecting mice? Then I see this in the Times (as well as the WSJ, the WaPost, and just about everywhere else).

The story reads like a good noir. Microsoft notices a spike in the number of people who are clicking on two very different kinds of ad links: auto insurance and World of Warcraft. Seems random, right? Surely no connection.

Well, the auto insurance folks raise a red flag. To them, the click uptick is actually a bad thing. That's right, a bad thing. Because they pay Microsoft based on the number of clicks they're getting. Suddenly they're getting so many clicks, they figure these clickers can't all be potential customers, and it's exhausting their ad budgets.

So Microsoft looks into it, and they think they've found the one thing that auto insurance and World of Warcraft appear to have in common: a man. Oh, and his mother. And his brother. From there the story gets even more complicated.

This story's like Burt Lancaster in one of the best of the 1950s noirs, "The Sweet Smell of Success." It's "got more twists than a barrel of pretzels!"