Accessibility links
The Web Makes Brick-And-Mortar Stores Big Boxes Of Disappointment : All Tech Considered The web is supposed to make life easy and fast, but what has it done to instant gratification? What has it done for the joys of brick and mortar? 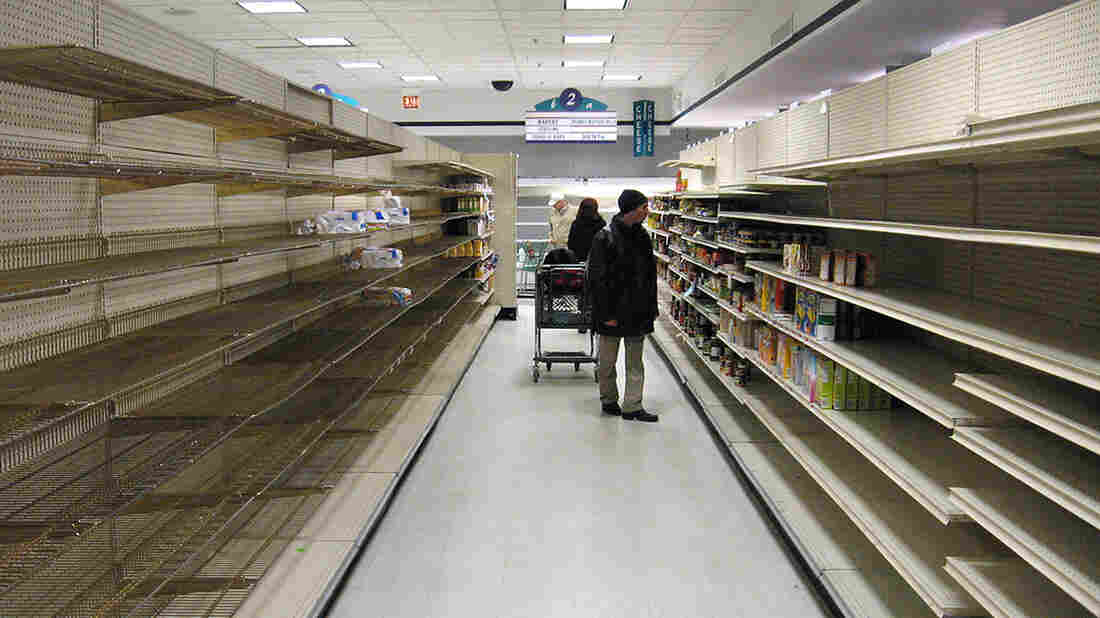 Not In Stock: Sometimes you just have to wait to get what you want. nsub1/via Flickr hide caption

A couple of months ago, I went into Best Buy looking for a fridge. We knew roughly what we wanted, but online, you can't get a feel for something that big. You can't be sure that "stainless steel" and "stainless look" are really the same thing. You can't really tell if a jug of milk will fit in the side shelf.

So my wife and I ventured to the brick and mortar home electronics giant, only to stand there puzzled looking at exactly one fridge.

The clerk cheerily told us, "We don't have any for you to actually look at, but you can look through a huge selection right here on this computer."

At the time we were preparing for our first child, so we'd been doing lots of shopping, but as the weeks went by, I walked into many a store to get the same response: "Nope, it's not at the store, but we'll happily mail it to you. Nope we don't carry it, but you can order it online. Yes, we do have a yellow model, but you'd have to order it online. "

Don't get me wrong, the convenience of shopping online is great. But not too long ago online stores were used to buy out-of-print British books about the Nicaraguan civil war, not everyday essentials.

Maybe I'm being a bit of a curmudgeon. But this part of the new world I don't like. I want to be able to open up a stroller; I want to be able to feel the effort it'll take to haul it up a flight of stairs to the Metro. I want to look at the side of a refrigerator and notice that it's black, not be surprised when the delivery person shows up with a gray-sided one. I don't want to have to pay close attention to a long list of specs or take out a tape measure to get a sense of how big something is.

But most of all, I want instant gratification. When I buy a major appliance or electronic gadget, I want it now, not in the 7-to-14 days it takes to order, get it out of the warehouse and ship it to my house.

I get it; online stores make sense. Brick and mortar is expensive, so keeping everything in stock in every store is impractical at best. But this feels counterintuitive to me because I thought the Internet was about making life easy and fast.

That's the way it is when you buy an e-book or when you buy a mobile application. I remember all the calls for the death of brick and mortar music stores when iTunes made getting a newly released album so easy. To be honest, I was one of those voices. For the ability to listen to an album the second it's released, I'd forgo liner notes and the warm feeling of expectation as you dig into a jewel case.

But as the Internet creeps into other products, I'm backing down.

It turns out I don't want the Internet to replace stores. In fact, I want brick and mortar stores with lots and lots of boxes and lots of and lots of display models back. Right now, there's nothing I want more than to be able to stuff a big ol' box in the back of my car, take it home, open it up and enjoy what's in it the same day I bought it.