Accessibility links
What Do The Marines And ESPN Have In Common? : All Tech Considered According to ESPN's Ric Bucher's Twitter feed, the network is clamping down on non-ESPN Twitter postings.

What Do The Marines And ESPN Have In Common?

What Do The Marines And ESPN Have In Common? 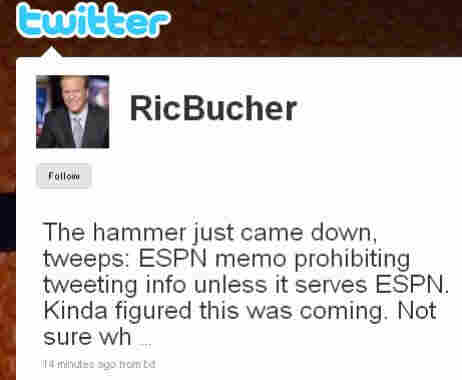 Ric Bucher, who covers the NBA for ESPN and ESPN.com, said in a Twitter post today that the sports giant is prohibiting Twitter posts that don't serve the network. Bucher has more than 18,000 followers on the site.

If true, this would seem to suggest that while ESPN may understand the difference between a fade-away and a cross-over dribble, it absolutely doesn't get Twitter. In fact, the network that built itself on not just flashy graphics, but also goofy nicknames for sports figures, is acting like a teacher trying to keep students from passing notes in class.

Idle chit-chat and non-promotional conversation is kind of the point of Twitter, not whatever branding and synergistic strategy might be laid out in such an (alleged) memo.

Sure, we kind of expect that from the Marine Corps (Tweet bad info and someone could die) or from the generally clueless NFL, but ESPN?

If you're in sports journalism and you can't have a regular, non-ESPN-serving conversation with the brilliant Twitter personality Shaquille O'Neal over the social network, you probably aren't doing your job anyway. Now we'll just wait and see if the memo pops up on a sports blog.

Edited to add: The Big Lead, among other blogs, has posted the ESPN Twitter memo. It was said to have come directly from ESPN's PR reps.