Accessibility links
Bar Codes: The Thrill Is Gone : All Tech Considered As self check-outs expand, the mysterious and thrilling nature of the bar code reader went with it. 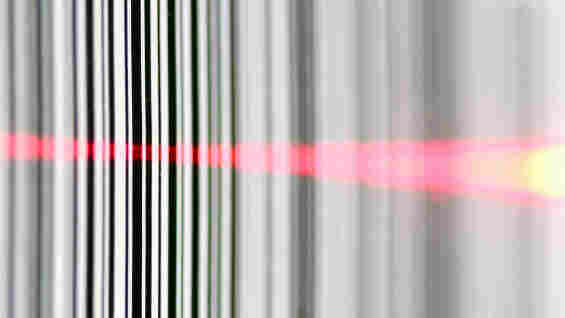 A package's barcode is scanned by a laser. Scott Vickers/iStock.com hide caption

I remember as a kid, the one thing that made me want to be a grocery store clerk was the bar-code reader. My mom would warn me over and over that lasers hurt your eyes. "If you look into those machines, you'll go blind," she screamed. Mind you, my mom said the same thing about microwaves and televisions but I always looked.

I looked and saw the silver drums spinning and that array of dangerous, crisscrossing red lines. I ran my hands on top of the machine in hopes, perhaps, that it could tell me something about my life and in fear that the red lasers could cut right through my skin. None of that ever happened, of course. But, on at least a few occasions, I snuck a can or a box across those mesmerizing lasers before the cashier had a chance to ring up an item. And sure enough, like magic, the computer would know that it was a can of Goya red beans or a box of Corn Flakes.

And that's the thing about the bar code: It was the intersection of low and high technology; it seemed old and modern at the same time; it was convenient, yet it felt like by using it, machines seemed a bit too knowledgeable. It was a piece of ubiquitous technology that only those in the retail sector had hands-on access to.

Then came the self-check-out aisle.

I remember the first time I saw one at KMart. I remember watching a kid rip out a bag of chips from his mother's hand and gladly slip it past the lasers. I remember that even then, even as an adult, that successful "beep" made me smile.

Now, just as we celebrate the 57th anniversary of the bar code patent, even my iPhone is a bar-code reader and self-check-out stations are everywhere.

In some ways, I think something happened when bar-code readers came out from behind the counter. Slowly, I've stopped thinking of them as ethereal and mythical.

Slowly, the forbidden, mysterious nature of the bar code has unraveled and become, well, routine.