Accessibility links
What A Celebrity-Sex-Tape Lawsuit Can Teach Us About Fair Use : All Tech Considered Eric Dane of Grey's Anatomy and his wife Rebecca Gayheart are suing Gawker after the blog published scenes from a naughty home video. But is it a case of fair use? The PBS blog MediaShift thinks it very well might. 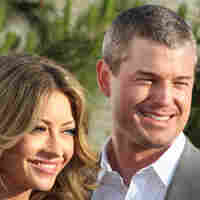 Eric Dane of Grey's Anatomy and his wife Rebecca Gayheart are suing Gawker after the blog published scenes from a revealing home video. Is it a case of fair use? Or did Gawker violate the couple's copyright on the video? (Frederick M. Brown / Getty Images) hide caption

Now I know it's not every day you see a blog post on NPR.org about celebrity sex tapes. But today's an exception because of a story we saw on the PBS(!) Web site. Being PBS, of course, they weren't exactly channeling TMZ or Perez Hilton; rather, their MediaShift blog has taken a thoughtful look at whether Gawker.com's publishing of a particular sex tape constitutes "fair use" of unlicensed media.

Given how easy it's become for anyone with Internet access to publish just about anything online, understanding fair use is now more important than ever. Codified within U.S. law in the 1976 Copyright Act, fair use attempts to define the situations in which someone can publish portions of someone else's copyrighted material without licensing it, for the sake of news reporting, criticism and the like.

In the MediaShift post, blogger and law student Rob Arcamona dissects a copyright infringement lawsuit against Gawker by Grey's Anatomy co-star Eric Dane and his wife Rebecca Gayheart, who recorded a video of themselves frolicking in their birthday suits with former beauty queen Kari Ann Peniche. Gawker got their hands on the 12-minute video and published an edited, four-minute version of it.

One might think that this is a slam-dunk case for Dane and Gayheart, but MediaShift's Arcamona isn't so sure; he gives Gawker a "three-point spread" in the case. Arcamona then goes through the various factors used to identify legitimate examples of fair use and applies them to the lawsuit.

As far as some of these factors are concerned, Dane and Gayheart might have the legal edge. For example, Gawker scooped Dane and Gayheart by publishing the video first, and whether or not they intended the video to see the light of day is another kettle of fish. But a scoop is still a scoop, as Arcamona explains:

In a 1985 decision, the Supreme Court stated that a copyright holder has the 'right to control the first public appearance' of copyrighted material. Gawker's post was the first time the public had ever seen the video, meaning that Gawker does not have much of an argument here.

It also probably doesn't help Gawker's case that they used one-third of the entire video in their post, rather than a screenshot or a brief clip.

Having said that, another factor in judging whether fair use applies in a given circumstance is whether or not a person's publishing of a copyright-protected work undermines the copyright holder's ability to make money off of it.

If you watch the video as edited by Gawker - not safe for work, unless you work at Gawker or PBS, anyway - there's no shortage of nudity, but nothing much more salacious than that. That could be relevant to the case, according to Arcamona:

In fact, if the video didn't show Gayheart and Peniche without their shirts, and bleeped out the swear words, it might be suitable for daytime TV.

And if that, indeed, turned out to be the case, the relatively tamer Gawker version wouldn't necessarily undermine Dane and Gayheart's ability to make money from it. Hence, a potentially strong fair-use argument by Gawker.

Anyway, the PBS story makes for an entertaining read. The video serves as an unexpected teachable moment about the complex issue of fair use in the Internet age.

For those of you who wish to delve into it further - fair use, not the video - you should check out the Center for Social Media, which has a great collection of best practices regarding fair use. And if you want to delve into the human side of the video, well, there's always Gawker for that.