Accessibility links
High-Speed Connection With God : All Tech Considered The topic of religion and technology is a big one. We explore a batch of interesting and useful websites and apps that help keep you connected to your faith.

The topic of religion and technology is a big one. In my three-minute piece on All Things Considered, I wasn't really able to give listeners the whole picture but I hope I at least whet your appetite. I thought it might interest listeners to check out some of the websites and apps I mentioned on-air.

A few Sundays ago, I attended Church from my living room couch, coffee in hand. I listened to a worship service that reminded me more of a Dave Matthews concert. At one point, we were asked to raise our hands if this was our first time at Lifechurch. I clicked on the button and saw that fifteen other people had done the same thing. The whole service was infused with these interactive elements.

Then I found Koogle, a "kosher," Hebrew search engine for Orthodox Jews that omits websites Rabbis deem inappropriate. Speaking of search engines, Zabihah helps Muslims locate halal meat around the world and Shamash does the same for Jews trying to keep kosher. 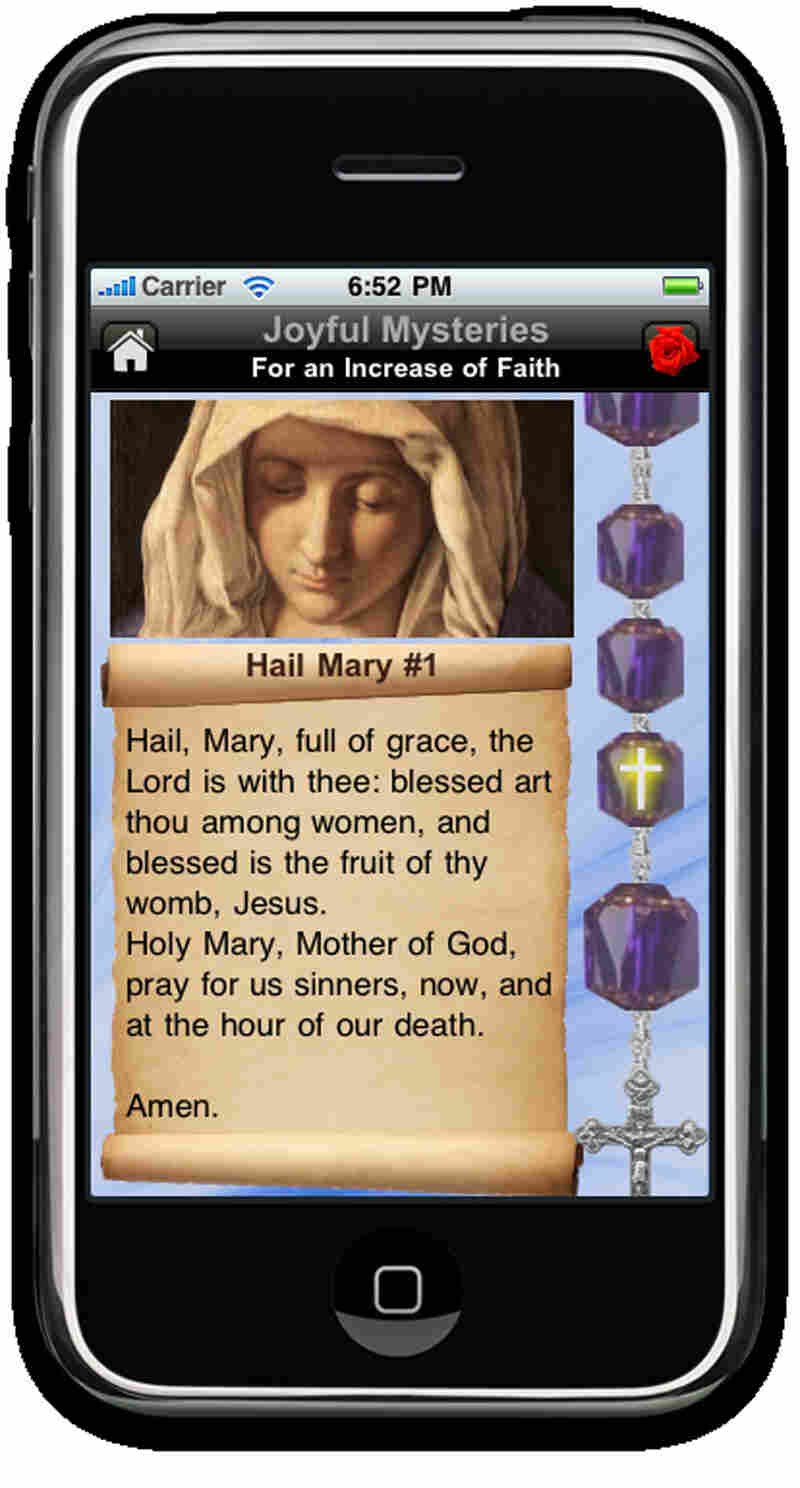 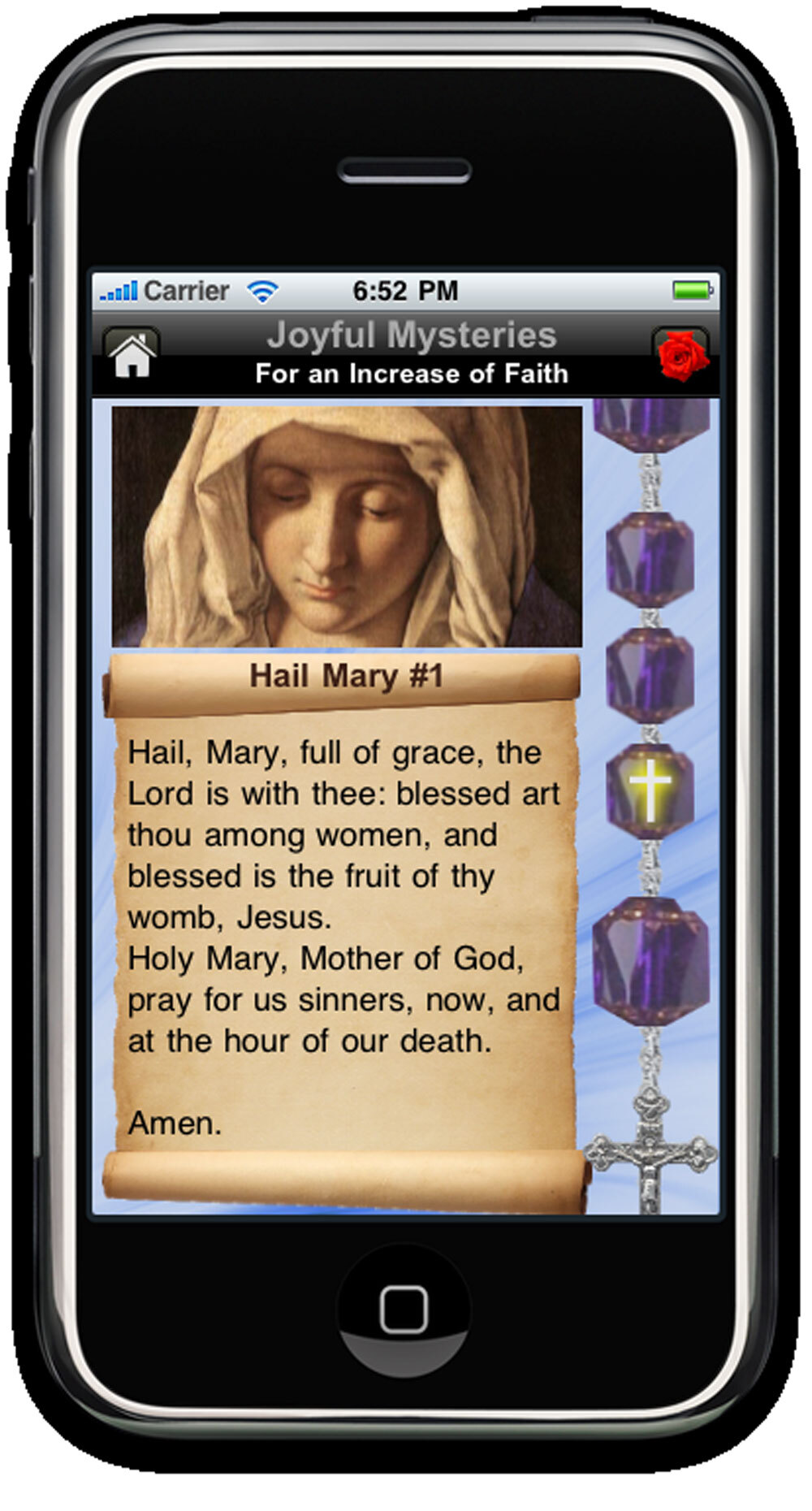 Prayer beads go high tech with the iRosary App for the iPhone.

As I mentioned in the piece, Dave and Jackie Brown were motivated to make the iRosary when their daughter Isabella (who was six at the time) was diagnosed with a vicious form of cancer. They took turns taking care of her; Jackie would stay at the hospital Mondays through Fridays and Dave would take over on the weekends. They prayed a lot.

As the treatment progressed, Isabella became more sensitive to sound and light. The Browns didn't want to disturb her but for their own sanity, they wanted to continue praying the rosary. The iRosary is the product of this situation and Isabella is happy and fully recovered, by the way.

A fantastic group of creative people have put together G-dcast (yes, the hyphen is supposed to be there), a website that features 55 animated videos explaining the 55 Torah portions or parshas in four minutes. In this particular video about the Torah portion "Shemini", the music is performed by DeLeon, a recording artist with J-Dub records.

iPhone Islam is a website that reviews Muslim iPhone Apps. I thought the Ela-Salaty Prayer Timing app was pretty incredible. Imagine an alarm alerting you it's time to face Mecca?

I also spoke with Kevin Hamilton at Vurgood Apps about their Prayer List app. If you are managing a lot of prayer lists or prayer requests, I think this app would really come in handy. Texas-based Vurgood is working with churches in Dallas to create their own applications. Kevin explains that these churches are looking for more ways to connect with their congregants outside of Sunday services.

That seems to be the theme here, keeping people observant and connected away from home, away from church, on the plane, on the bus, on the go.

Does tech keep you connected to your faith? Or does it pull you away? Share your thoughts (and your favorite websites/apps) with us.