At the end of 2009, a flood of consumers looking for smartphones turned to Apple and Android models. The rush of purchases helped give the pair solid gains at the expense of phones using Symbian and Linux systems, according to the latest numbers from Gartner Research, which tracks the mobile phone industry. 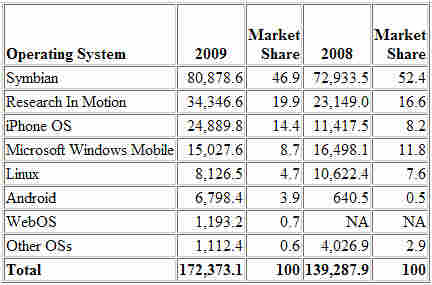 A Shifting Market: Operating systems by Apple and Android made big gains in a survey of worldwide smartphone sales in 2009. Numbers are in thousands. Gartner Research hide caption

In January, Apple said it had sold 8.7 million iPhones in the final quarter of 2009. The newer Android operating system saw exponentially rapid growth — after being on 640,000 smartphones in 2008, it was on nearly 6.8 million in 2009.

Gartner research director Carolina Milanesi says that smartphone operating systems will bear watching in 2010, as consumers look for the easiest and most effective ways to take pictures, surf the Web — and talk on the phone.

"Looking back at the announcements during Mobile World Congress 2010, we can expect 2010 to retain a strong focus around operating systems, services and applications, while hardware takes a back seat," Milanesi said.

And the improved software that we're likely to see in 2010 won't necessarily come with a higher pricetag, according to Gartner's analysis.

"Sales will return to low-double-digit growth, but competition will continue to put a strain on vendors' margins," Milanesi said.

While Apple might expect to build on its gains this year — especially if it releases a new iPhone sometime in late spring, as many expect — it still has a way to go before it cracks the top 5 in the worldwide cellphone market.

Samsung was a winner in that category. It achieved the greatest gains: Its market share grew from 16.3 to 19.5 percent, while Nokia lost 2.2 percent.

Overall, mobile phone sales worldwide totaled 1.2 billion units in 2009 — nearly a 1 percent decline from the previous year, according to Gartner.