Accessibility links
A Futuristic Bunker Meant To Survive The Future : All Tech Considered Communal bunkers offer the hope of surviving a near-extinction-level event — like the one many people say the Mayans predicted will occur in 2012. The California-based Vivos offers hundreds of people the chance to live underground together.

A Futuristic Bunker Meant To Survive The Future

A Futuristic Bunker Meant To Survive The Future

Communal bunkers offer the hope of surviving a near-extinction-level event, like the one many people say the Mayans predicted will occur in 2012. A new company offers the chance to take your life underground. There, peace and quiet — and the ability to survive an apocalypse — are assured, thanks to California-based Vivos.

Here's a video from their site:

This may seem far-fetched, after all, doomsday plans are mainly for cult leaders and the military, but Vivos (Spanish for "The Living") is trying to widen the circle. In fact, their new product aims less at budding Dr. Moreaus and more at fans of Daniel Pinchbeck — or, God forbid, Roland Emmerich.

The privately funded Vivos says that one of its 10 planned facilities — each meant to house up to 200 people — costs around $10 million to build. That includes, the company says, "food, fuel, water, clothing, medical supplies and security devices in a multi-level, 20,000 square foot hardened shelter."

It must be a hoot to write up the press releases and promo material for a venture like this. I like how they capitalize Earth — a sign they're thinking on a galactic level. I guess that makes up for how you don't get to take one of those crazy-long elevator rides so popular in government-sponsored subterranean projects we see in the movies. The shelter is only 30 feet below ground.

If you're wondering what daily life will be like in the bunker, there's a sign that maybe the Vivos folks are fans of Battlestar Galactica, where each civilian ship in the fleet had its own leaders: "Once a facility is occupied and under lock down, the co-owners will elect a council and take over autonomous operation and management of their Vivos facility."

Or, maybe it's less that they're BSG fans and more that they believe the democratic models of condo boards and homeowners' associations are worth passing down to the next phase of humanity.

Looking ahead to say, Dec. 23, 2012, here are some signs that your bunker may be heading down the wrong rabbit hole:

* The bylaws start with "First, spill no blood!"

* You run through the coffee and booze in the first week.

* Some passive-aggressive person packed a carton of Post-it notes.

* You hear the phrase "Sucks to your assmar."

* Some of your pod-mates once earned a living on the competitive eating circuit.

* If you actually need a rule like "Don't call it a Reich," you're already beyond help.

For all you tech-heads, here are the survival system's components: 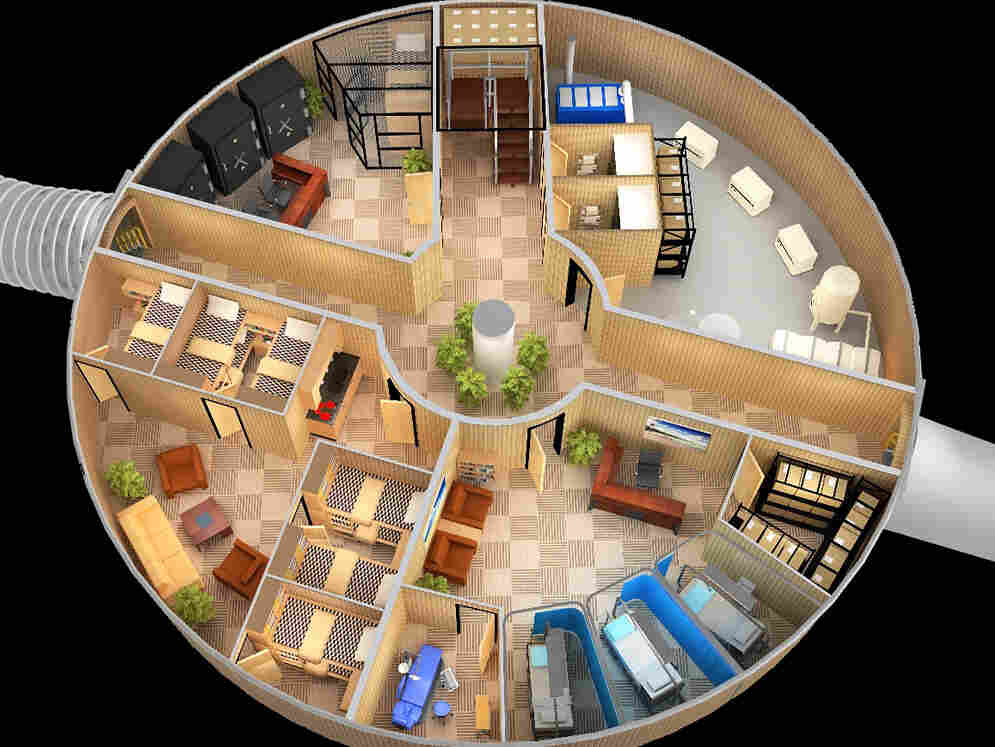 An artist's rendering of living quarters at a  Vivos complex. Vivos/Vivos hide caption

So that's the plan. So far, it looks like Vivos has only built a prototype, in Barstow, Calif. — and from what you can see in an NBC affiliate video report, it doesn't look as smoothed-out as the one in the company's promo video.

Still, this has to be fun to work on. It's futuristic as all get-out, involves lots of tech, and could potentially save lives — or, as Vivos says, humanity itself.