Accessibility links
New recording features the beetles. : All Tech Considered Scientists listen in on the sounds inside insect bodies to unlock the mysteries of their anatomy.

What young boy could resist sticking a tiny micophone inside an insect to hear what it sounded like?

I know I couldn't, though I never succeeded. (I think my microphones were too big.) But a team at Clarkson University had the tools to do it right. In the process, they've made a stunning breakthrough at the frontier of internal bug body cavity acoustics.

One small step for man, one presumably painful procedure for a cadre of beetles, mosquitos and flies. 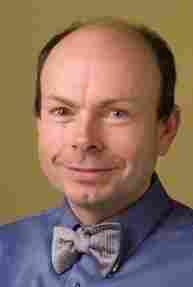 The team that did this didn't use the sort of microphones folks here at NPR regularly thrust into the snouts of politicians or CEO's of oil companies. Rather they used nano probes called Atomic force microscopy.  Professor Igor Sokolov told NPR's Robert Siegel that this technique allowed Clarkson scientists to listen to sounds that once amplified could be heard by humans ears.

The big question is, why?

"Curiousity," was the first answer we got from Sokolov. But he amplified his remarks by telling us there was a technical challenge to collecting vibrations on such a  small scale. Plus, he says, there's a lot to learn about insects from hearing the hums and hisses that occur in their bodies. It tells you what's ticking inside a tick.

Sokolov likens his insect microphones to fingers. They sense vibrations. Other scientists have tried this, too.  However, up to now the oscillations weren't in the range humans can hear. That makes all the difference.

Someday, Sokolov predicts, his work will lead us to create audio templates for how the inside of our own organs should sound.  A doctor could put down the old stethoscope, with its reliance on subjective insight, and look at a computer comparision to see if a patient's internal soundscape was a match for how a healthy human should sound.