Accessibility links
From Palm Pre To Android With The HTC Evo 4G : All Tech Considered Sprint has sold out of its latest phone, and with good reason. The Evo’s seriously fast connection, 3-D navigation system, and 8MP camera make it worth the splurge if you live in a 4G-covered area.

From Pre To Android 4G: Notes From A New HTC Evo User

From Pre To Android 4G: Notes From A New HTC Evo User

Over the weekend, my boyfriend and I switched from the Palm Pre, phones we've had for about a year, to the new HTC Evo 4G from Sprint. (We were apparently among the lucky ones, as Sprint has reportedly sold out of the phones as of Tuesday.) And despite that it feels like we’re holding a King Size Hershey bar to our ears, I think we'd both consider it a big fat upgrade. 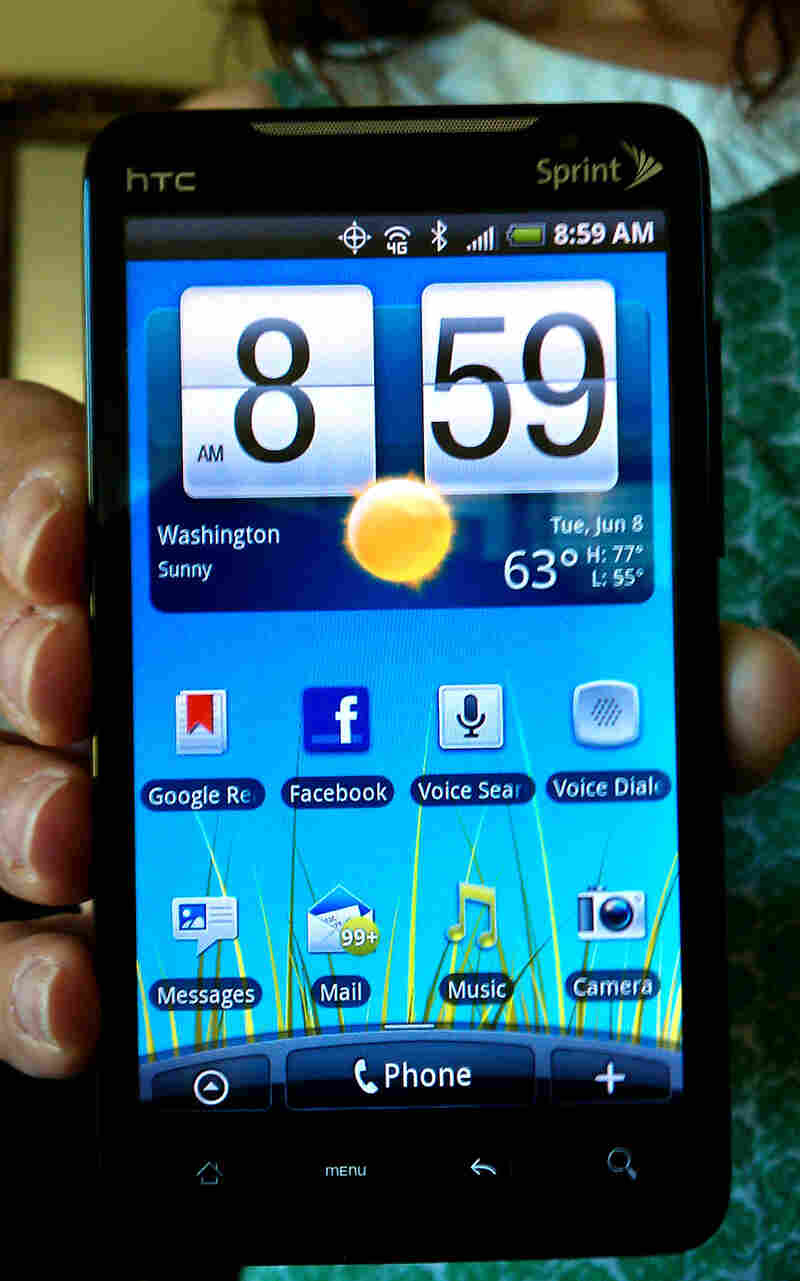 We may not have necessarily needed new phones, but the extravagance of the splurge seemed worth it given the Android phone’s perks and features.

A lot of what I am finding nifty about this phone is what was lacking in the Pre: a vast library of apps. There's one for NPR (gotta keep an eye on work at all times!), HD Youtube, voice command software (that so far works impeccably), an HDMI dock, that little feedback buzz when a button has been touched and an extra-large screen and kickstand that will give my eyes and hands a rest when watching videos.

Both the Pre and the Evo promise Flash capability on the way. We'll see who wins that race.

It’s no surprise that the touchscreen on the Evo -- with its faster 1 Ghz processor -- feels much more smooth and responsive than my old Pre.

Though we've only had the Evo for three full days, we've logged many hours poking around and have come up with some initial impressions:

1. Video chatting capabilities. The very first thing we did was make a video call (um, ok, to each other as we both sat on our sofa) using an app called Fring (which uses Skype on the backend). THIS PHONE IS FROM THE FUTURE.

The call was hardly seamless -- the video lagged -- but, come on, we were VIDEO CHATTING ON OUR PHONES.

That being said though, I wonder how often I will really ever use this feature. Will it ever be anything but a novelty for me? And does this mean I’ll have to now be presentable to answer the phone? As a corollary to “On the Internet, nobody knows you’re a dog,” on the phone, no one knows you’re once again unshowered and in your pajamas.

2. Camera. The 8 MP camera takes incredibly sharp, crisp photos – we're talking down to the eyelashes. Perks include digital autofocus as well as a manual focus using the touch screen -- just touch the screen where you want to focus. There's also a super bright dual LED flash, as well as the option of switching to the 1.3 MP front-facing camera for self-portraits. Before that second camera, it was a real challenge to snap a good self-portrait.

3. Navigation system. I am, shall I say, navigationally challenged and the system makes it hard to stay lost. It features a Google GPS-type navigation program, which means 3-D, first-person animation with voice direction. On a trip to rural Maryland on Sunday, we did a quick search for a Lowes hardware store; by simply saying "Lowes," Evo found, without the use of the keyboard, the closest store and provided turn-by-turn directions.

4. 4G. I feel fortunate that Washington, D.C., is one of the first areas with 4G coverage. But there are only 65 markets with the service at the moment, 4G coverage may be spotty as I try to use it more places. Regardless, 4G makes this phone seriously fast. In fact, when I tethered it to my laptop, it was faster than our home DSL connection. (As a bonus, when you tether, you charge your phone at the same time.)  I used an app called Easy Tether, which is free to try, or $10 to buy, and there are no monthly fees from Sprint beyond the unlimited data plan. We’re considering dropping our 3 megabit Verizon DSL because the phone speed provided slightly faster upload and download speeds.

Let me repeat that: thanks Evo, we may save money.