Accessibility links
The YouTube 'Bed Intruder' Meme: A Perfect Storm of Race, Music, Comedy And Celebrity : All Tech Considered A controversial Youtube video of an upset African American man goes viral, spawning numerous copycat videos. Is this Internet meme really about race, comedy, music, celebrity or a delicate mix of all of the above?

It all began last week, when reporter Elizabeth Gentle of WAFF-TV in Huntsville, Ala., aired a story about a woman named Kelly Dodson who was almost raped in her bedroom by a home invader. The video included an interview with her, but it was her brother Antoine Dodson, who interrupted the assault, who stood out in the story.

Dodson addresses the camera directly with a mixture of anger, defiance and flamboyance.

“Well, obviously, we have a rapist in Lincoln Park," he says. "He’s climbing in your windows, he’s snatching your people up, trying to rape them, so you need to hide your kids, hide your wife and hide your husband, because they’re raping everybody out here.”

The video quickly became a runaway online hit. But is this Internet meme really about race, music, comedy, celebrity or a delicate mix of all of the above? And for Antoine Dodson, how would he respond to his new-found fame?

WAFF-TV received angry calls and e-mails from members of the public who felt the story perpetuated stereotypes about African Americans. The station, however, stood by its decision to air the piece.

Online discussion of the “Bed Intruder” meme, as it’s become known, initially focused on that angle, as well as the divide between those who felt the video was funny or offensive.

“If you wonder why folks can't take the news seriously, here's Exhibit A,” noted the blog AverageBro.com. “Lord, Jesus, how can the reporter file this story with a straight face?”

But the tone of the meme changed drastically as people began to create parodies of the video a few days later. These parodies hit critical mass when the duo known as the Gregory Brothers, who produce the popular YouTube channel AutoTune The News (ATTN), put their own spin on the video. In their version, they AutoTuned Dodson’s voice to sound like he’s singing an R&B song.

At the end of the ATTN video, one of the Gregory Brothers performs a “cover” of the song on piano, then challenges YouTube users to create their own versions of it. And create they have: As of this morning, there were more than 750 videos on YouTube dedicated to the Bed Intruder meme. While a number of them are just rehashes of the video, many people have taken the time to record original versions on the song.

There were two things that struck me about these musical responses. First of all, the performers actually have some talent – and in some cases, a lot of talent. They put serious energy into crafting their own version of the ATTN song, sending the meme into new musical directions. Secondly, you can’t help but notice the multicultural nature of their videos. People of various racial backgrounds happily jumped into the meme. The initial TV news video was racially polarizing, but the Gregory Brother’s injection of music and humor into it led to a broad public response that’s been surprisingly colorblind.

Nonetheless, I can’t help but wonder if all the musical versions of the original video have all but subsumed an important public conversation on race and media. So I asked Baratunde Thurston, Web editor at TheOnion.com and co-founder of the blog Jack And Jill Politics, for his thoughts on the matter.

“I first saw the news report last Friday on YouTube and posted it to my Posterous site,” he explained. “I thought it was amazing and embarrassing and hilarious and tragic. One of my commenters pointed out the AutoTune The News remix and I posted that as well with the same set of feelings.”

As the remix took off, I became increasingly uncomfortable with its separation from the underlying situation. A woman was sexually assaulted and her brother was rightfully upset. People online seemed to be laughing at him and not with him (because he wasn't laughing), as Dodson fulfilled multiple stereotypes in one short news segment. Watching the wider Web jump on this meme, all but forgetting why Dodson was upset, seemed like a form of ‘class tourism.’ Folks with no exposure to the projects could dip their toes into YouTube and get a taste.

I also asked Kenyatta Cheese of KnowYourMeme.com for his take. KnowYourMeme has been documenting the spread of the meme over the last week.

Diagram Of A Meme 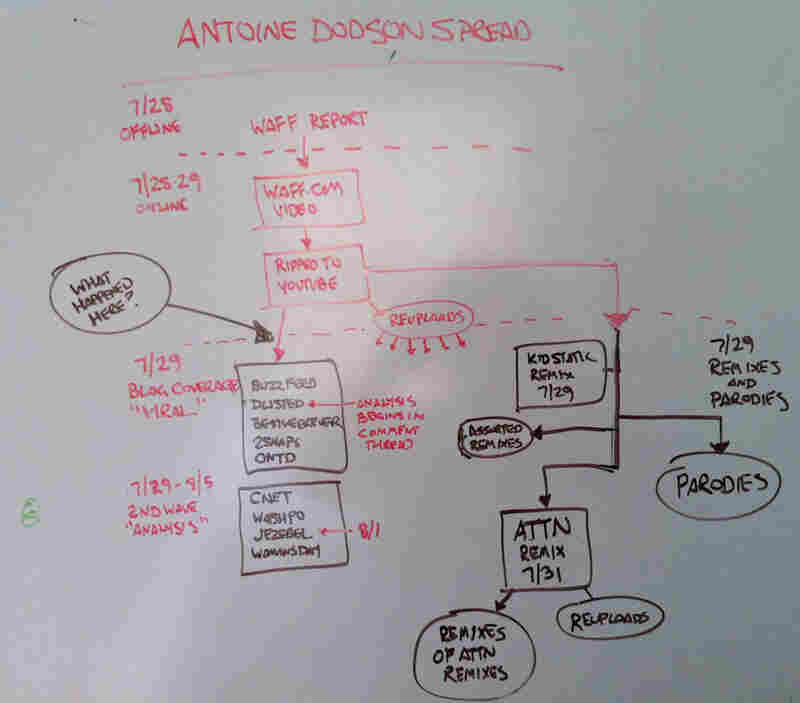 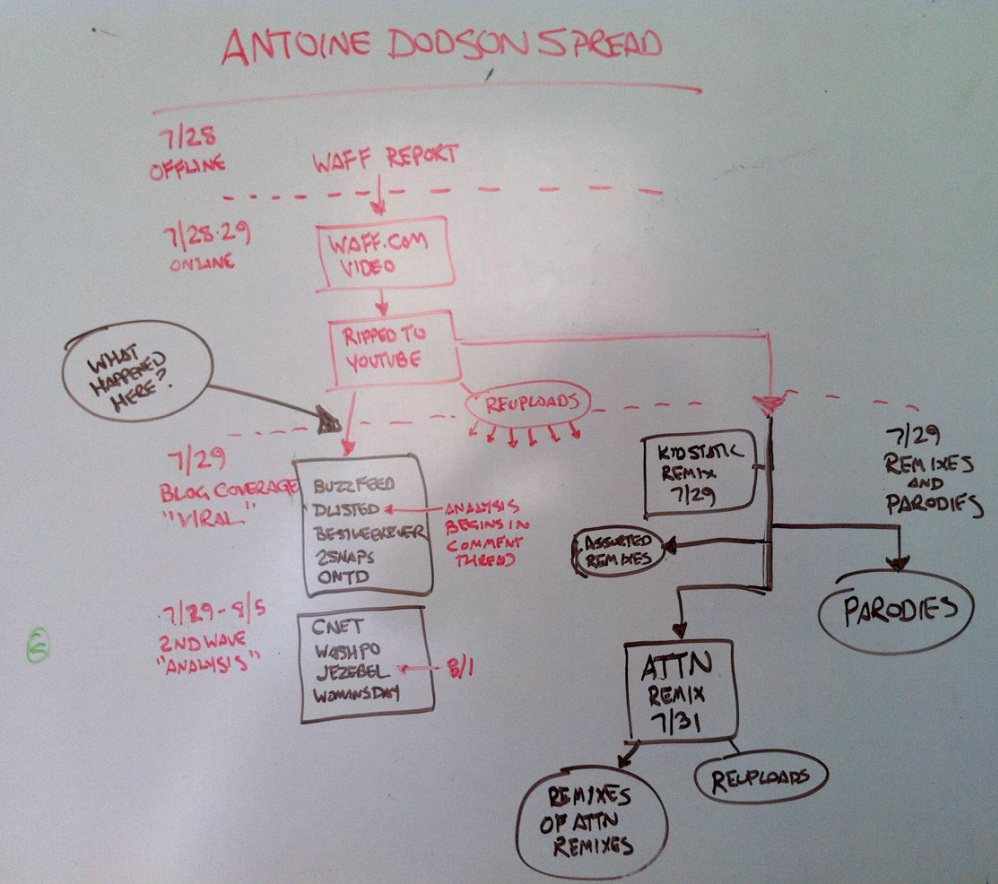 Kenyatta Cheese diagrammed the spread of the meme.

"More and more we're seeing people be inspired by viral videos to respond by creating videos themselves,” Kenyatta explained. “While there is a long history of ‘amateur’ (non-market) spoofing, it is no longer the domain of professionals at SNL, Mad Magazine and drive-time radio hosts.  Spoofing is participatory and it's just as good as the commercial stuff.

"There's a history of local news media exploiting under-represented communities for a quick story,” he continued. “And yes, I can hear the black community's anxiety about representation in the media coming from my own head - I'm African American and Chinese.  But these issues are about the audience's perception.  While there will always be a small percentage of the public who is laughing at him, it's hard to not empathize with Antoine because he is so sincere."

And that last point is really worth noting.

Both Baratunde and Kenyatta marveled at how Antoine Dodson himself has responded to the situation in recent days. He’s embraced his newfound online celebrity, launching a blog, a Facebook page, a Twitter account and YouTube channel. Among his first videos is a clip of him hosting a meet-and-greet with some of his fans, who are almost exclusively white.

“The creativity unleashed has been amazing,” Baratunde continued, “and what mitigates my fears of people minimizing the gravity of the situation is how Antoine himself has responded and taken charge of his own meme.”

Dodson appears to be enjoying the limelight. This week he thanked all of his fans and supporters on his new blog:

You all made me who I am today and for that I will for ever be in your debt. Once again I say thank you from me and on behalf of my entire family. I love you guys so much. You have given me this opportunity to shine so dammit I'm going to shine.

If you’re measuring winners and losers in this whole thing, simply by counting YouTube views, WAFF-TV and AutoTuneTheNews have done well for themselves, accruing millions of views in a matter of days.  Yet don’t discount how Antoine Dodson is trying to reclaim ownership of the meme by embracing various social media platforms. Let’s face it – he's literally become a brand overnight.

As Baratunde told me over the phone, more and more people who have been victimized by out-of-control memes now have the social media savvy to take control of the conversation. Contrast this with, for example, the Star Wars Kid, who struggled to respond when a video of him went viral in 2002. This was pre-Twitter and pre-Facebook, both of which make it easy for anyone to respond rapidly to a developing online situation.

“The transition to victimhood to agency is fast,” Baratunde continued. “I’ve been super amazed at Antoine Dodson. He still remembers what’s important, and a lot of people who are connecting to him do as well, asking him how his sister and family are doing. I like that he’s taking control of his own meme and keeping it grounded in the reality of what started it in the first place.”

Putting all of the racial, media and musical discourse aside, if Antoine Dodson plays his cards right, he might have the last laugh.

“Kelly and Antoine may be victims but they are fearless,” Kenyatta told me. “They both take control of the camera and call out their attacker.  They issue a call to action telling people in their community to look out for the perpetrator.  And yes, Antoine may not seem traditionally articulate, but he uses his time on camera to be performative and create spectacle and that gets our attention.  In that sense, he's probably more effective in getting his message out there than a more traditional community 'representative' would ever be.

"To me, Antoine Dodson is brilliant.”