Accessibility links
Google And Verizon CEOs Unveil Proposed Net-Neutrality Policy : All Tech Considered The proposed public policy leaves the world of wired internet neutral, but exempts wireless broadband from most of the agreement. Under it, service providers are expected to be transparent about how they manage traffic.

Google and Verizon announced Monday that the two companies had reached an agreement on a policy proposal surrounding net neutrality.

The agreement states networks should be transparent about how they manage traffic and that they cannot degrade traffic or provide paid prioritization to any service on the public Internet. The policy does leave room for providers like Verizon to create "additional, differentiated online services."

Seidenberg explained that includes services like Verizon's FIOS TV or hypothetically could include something like a Metropolitan Opera 3D broadcast of a performance. 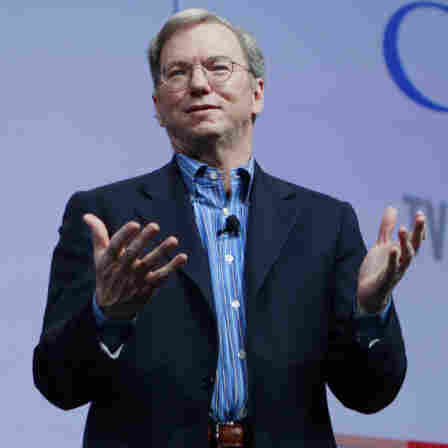 Some companies, he said, may not want to transmit something like that over the Internet, so they want the ability to be able to provide a differentiated service.

That said, Seidenberg added, these services could not be "designed to circumvent the rules."

What is net neutrality?

Net neutrality is about preventing high-speed Internet providers from discriminating against certain sorts of providers or users of their network. For a hundred years, we've treated communications providers like sidewalks. The sidewalks can't choose between different walkers and have them travel at different speeds.

Read more about net neutrality and past court decisions on the subject.

The big caveat in the proposed policy is that the Federal Communications Commission could enforce these rules only in the wireline world. Wireless broadband would be exempt from all the rules, except that the service providers would be required to be transparent about their network management.

In the conference call, Seidenberg said the two companies came to this proposal after conversations with FCC, including its chairman, and other service providers.

Verizon said is set to begin abiding by the policy proposal, even before the FCC takes any action.