The Slate article was accompanied by a controversial a brown Twitter bird wearing an oversize baseball cap. It inspired dozens of parodies, including these. 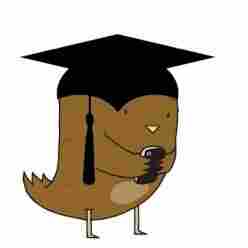 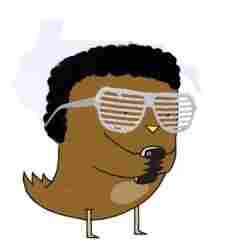 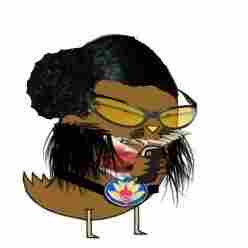 Whenever you have a news headline that starts with three words, "How," "Black," and "People," someone's bound to get upset.

Not to mention the addition of a controversial illustration -- the little blue Twitter bird, colored brown, holding a smart phone, and wearing an oversized baseball cap, cocked to the side ever-so-slightly.

But Slate technology columnist Farhad Manjoo says he knew what he was getting into when he wrote, "How Black People Use Twitter."

"I was bound to offend people with this article," Manjoo says. "But I thought that it was kind of worth a risk to ask and perhaps answer some interesting questions."

His question was why so many popular topics on Twitter, called hashtags, seem to come from blacks, specifically black youth. Manjoo says he made that observation by checking out the Twitter profile photos of tweeters taking part in the popular hashtags.

"Young black people are not a group of people I see every day," Manjoo says. "I don't have any teenage black friends. And the fact that they were kind of part of this conversation just a click away from me was something that I was very interested in. I was seeing trending topics every day that were dominated by black people."

They were topics like "words that lead to trouble," or "if Santa was black," or even "ghetto baby names."

Manjoo says young blacks follow more people, retweet more often, and reply to posts more frequently on Twitter, causing certain topics to rise in popularity that have nothing to do with breaking news or celebrities like Justin Bieber.

That premise might seem pretty innocuous, but once it hit the Web, there was a backlash, even from people quoted in the article, like comedian and blogger Baratunde Thurston.

"Is this a reasonable way to talk about people who are still right there in the room?" he says.

He thought the piece was a little voyeuristic. And he also thought that the things these black youth were doing on Twitter were things everybody does on Twitter:

"If you look at the network of 40-year-old white male technologists, you will see that they talk to each other a lot as well," Thurston says. "And they're retweeting each other and replying to each other. But it doesn't stand out, because that is considered mainstream."

Danielle Belton of blacksnob.com wrote a blog post criticizing Manjoo's article. She says he was making something out of nothing:

But Manjoo says that, on Twitter, Black people actually do behave differently.

"The reason that the article is about black people is because these participants in these hashtags are using the service in a unique way," Manjoo says. "And I think that one of the reasons why I wasn't interested in how white people use Twitter is because I haven't seen groups of white people use it in this very interesting way."

Which takes us back to that Slate image of a Twitter bird with brown skin wearing an oversized baseball cap -- the image used to further illustrate that difference. Forget about the question of whether the premise of the article was right or wrong -- that "black" Twitter bird went viral.

"The photo was this weird combination of both cute and offensive," Belton says.

Alicia Nassardeen, of the blog "instant vintage," was the first to parody the black Twitter bird. She Photoshopped the birds with afros, and wearing kinte cloths and graduation caps. There were Michael Jackson birds, Prince birds, Antoine Dodson birds and even an Old Spice bird -- on a horse.

The images make the point that black people aren't a monolith.