Accessibility links
Jonsi's High-Tech Concerts: More Live Film Than Stadium Spectacle : All Tech Considered In a music industry struggling with how to sell records, the live show has become an important part of a musician's bottom line. Icelandic singer Jonsi is integrating pre-programmed technology with the art of live performance. 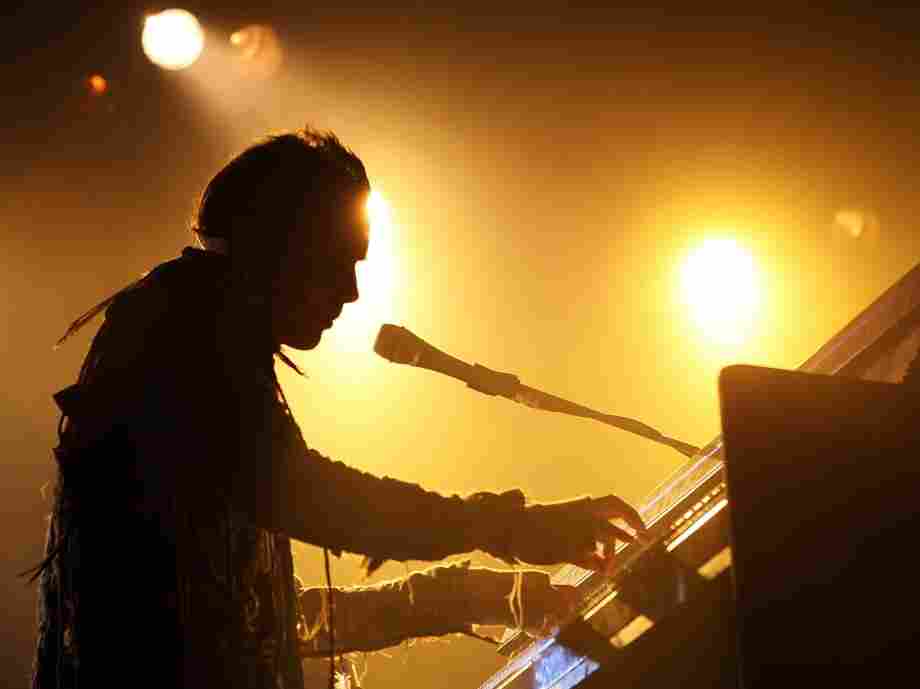 In a music industry struggling with the business of how to sell records, the live show has become an even more important part of a musician's bottom line. Concerts have become events. When bands like U2 hit the road, spectacle often accompanies them.

On its latest stadium tour, U2 played under a massive 360 degree screen -- showing a live relay of what's on stage -- but also graphics and montages of news footage. Where there were once smoke machines and light shows, Hollywood-style special effects have become the stadium norm.

But Icelandic singer Jonsi from the band Sigur Ros prefers a different setting. His orchestral, anthemic solo compositions are better suited to smaller theaters. But that doesn't mean he's cutting back on spectacle.

His upcoming concert tour in the U.S. is more like a live movie.

The stage looks like the inside of a burnt out warehouse. There are several broken glass windows and boxes. During his song "Sinking Friendships" -- about breakups and the passage of time -- it begins to rain against the glass -- like water running down your car windows.

And then as the drums kick in, a wall of gushing water gradually rises from behind the stage until it reaches the ceiling.

"We're never happier really than when someone sees one of our shows and doesn't realize there's any video in it," says Leo Warner, one of the directors of London-based 59 Productions, a company that specializes in designing video for opera and theatre.

"What we've been able to do with Jonsi is to kind of take a stage and take a set up and really make something come out of that that the audience isn't expecting -- creating an emerging world that happens in front of people's eyes," Warner says.

Think of what they're doing as the opposite of a movie soundtrack. In Hollywood, a musician is usually brought in to compose for scenes that have already been shot. In this case, 59 Productions was presented the songs and asked to create a VISUAL soundtrack.

The company's Mark Grimmer says it's kind of a cross between an art installation, a live gig and a film. Grimmer helped come up with animated sequences of wolves chasing deer across a forest; a fire that burns through the set; and a climactic, violent thunderstorm that appears to consume the band during the finale.

But none of these scenes are happening on a screen.

They're all projected onto the walls, the objects on stage, even the musicians.

Leo Warner says the trick is to make what's happening NOT stand out.

"We have a kind of general principle of trying to hide the technology or at least not let the technology take over -- whether that means projecting on a surface that's not a screen or a three dimensional object, which becomes animated in some way. It's very much a kind of ambition to be as subtle as we possibly can."

Nine projectors are hidden around the theater. All of the images are programmed onto 3 servers. They have their own crew that tours with Jonsi. And Mark Grimmer says this, too, is different from the 18-wheelers that transport your typical arena set.

"It has to be able to built in a matter of hours. It has to weigh a certain amount so it's not prohibitively expensive to ship. And all of that needs to be brought into mind from the very, very beginning," says Grimmer.

But even before they consider logistics, Leo Warner says the team tries to figure out how to integrate pre-programmed technology with the art of live performance.

"There is a risk with any technology in the theatre -- not just film and video -- there's a risk of it being kind of a replacement for dramatic content because you can do special effects and you can do dazzling moments, there's quite often a temptation to kind of stop the action and watch a bit of video," Warner cautions.

The challenge for designers like 59 Productions is how to strike that balance -- and convince musicians that this new generation of video won't also kill the radio star.