Accessibility links
The Evolution Of Video Game Symphonies : All Tech Considered Symphonies based on popular video game music have become par for the course. But a new crop of productions are taking the art form to another level.

The Evolution Of Video Game Symphonies

The Evolution Of Video Game Symphonies 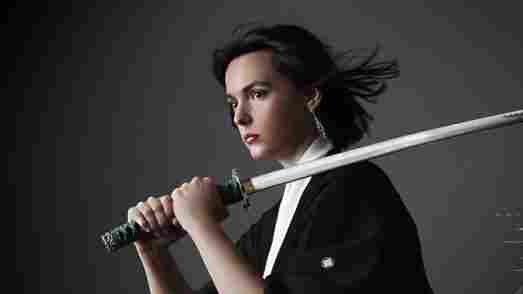 Blair Baker in costume for a production Hideo, which is scored with the music of video games and Japanese anime.  Courtesy of the Artist hide caption

After six months' worth of rehearsals, this Saturday marks the national unveiling of Hideo, a two-hour concert that uses the music of video games and Japanese anime to score an original storyline.

The performance is self-funded — creator, director and producer Blair Baker has poured $60,000 of her life savings into the project.

Recitals of music ripped from your favorite video games are about as rare as Super Mario Bros.' ringtones. Video Games Live, Final Fantasy Live, Distant Worlds: Music from Final Fantasy are just a few of the symphonies out there. But these have just been orchestrated versions of the original score, pumped up with more musicians and a backdrop slideshow.

Those were "nice," sums up Baker. "It's cool, and it's great, and it's a nice show. But in terms of what you could do? It's not super interesting."

You can hear her smile over the phone. "We could do something that's a lot better."

Actually having a functioning plot is just one way Hideo flips the typical gamer-symphony on its head. Hideo's narrative is timeless, a fantasy fan's dream: lone hero goes on epic quest, leaving behind even his love in the pursuit of justice. It is, in short, the stuff role-play games are made of.

Another difference is that the production counts on professional musicians who obsess about the music as much, if not more, than Baker.

"The first vocalist to audition was actually a huge Final Fantasy fan," Baker confides. "And ever since she had played that game she dreamed of being able to play that character, Celeste, and sing the aria. These are people who really care about the games, and who have really been touched by the music."

Baker herself comes from a technical background. Armed with a bachelor's in Computer Engineering from Cal Poly (San Luis Obispo), Baker instead landed squarely in her minor — music, with a focus in Sound Design.

Baker spent two years working with Electronic Arts on games like The Sims 3 but was laid off a year ago. She has since been busy doing odd theatre jobs and part-time office work. "Something to keep the money coming in, so we can keep doing this project," she says.

"My main driving force, while I am a fan, is actually more about the people, more about the other fans. It's about doing something that nobody else seems to be able to do." She pauses, starts to laugh. "Or even think about doing."

Hideo: A Theatrical Concert of Music from Japanese Animation & Video Games plays Saturday at the University of California at Berkeley.