Accessibility links
From My Twitter Feed:  In Loving Memory, May The #WalkmanRIP : All Tech Considered Take another moment to remember the Sony Walkman and your favorite mix tape. 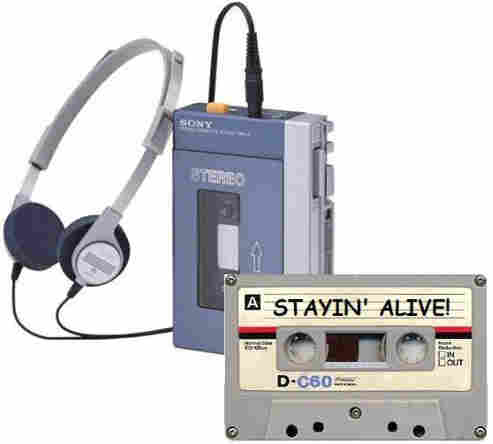 I still can’t quite remember what my first cassette was, but I’m guessing it was New Edition, the early years, as in “Cool It Now.”  This was way before the Bel Biv Devoe spinoff or Bobby Brown’s solo career.

After Sony announced the end of Japanese production of the Walkman, I noticed the hashtags “#WalkmanRIP” and "#FirstCassette” making brief appearances in my Twitter feed.

My #firstcassette was ... wait for it ... Willie Nelson's Honeysuckle Rose. Seriously. #WalkmanRIP

@whatsamatta_u lightened up the gravity of the situation with this tweet:

Great, I just got over Sony discontinuing the 8-Track Walkman #walkmanRIP

Twitter conversation continued its fun walk down memory lane, and brought a smile to my face during this difficult time.

In lieu of taking a moment of silence, @sidoscope tweeted:

In honor of #walkman I am going to listen to my old cassette of #abba on both sides. #lastSong #walkmanRIP

For those of you who never owned a Sony brand Walkman, @ReidCarlberg’s tweet may offer a modern day comparison you can relate to:

My first walkman wasnt a walkman at all. It was by sound design.and it ate batteries like a .... Well like an android phone. #walkmanRIP

The #WalkmanRIP tweets have died out, just like the use of the Walkman itself.

What was the first or last cassette you purchased?