Accessibility links
'Dead Drops:' Plugging Your Laptop Into Strange Places : All Tech Considered In public places around New York, an artist has installed five USB drives to encourage you to swap your files. Would you plug in? 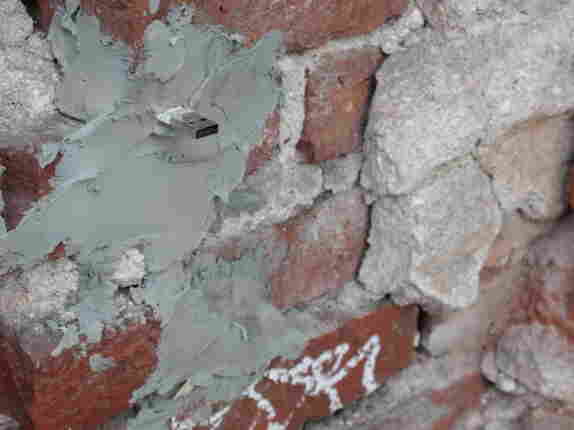 Would you plug your laptop into this? Aram Bartholl/via Flickr hide caption

If you're walking around bustling New York City, it's probably not with an open laptop. But if you were... you might notice the five USB flash drives that Aram Bartholl installed into walls and columns around the city. The small ports wait for someone to walk by, plug in a laptop, and drop off or pick up some files.

“Dead Drops” is still developing, but it’s already received lots of attention. Even the name sparks your imagination; it’s an intended homage to spy culture, both past and present. And for those curious enough to try, a read-me file on the drive encourages participants to leave an anonymous note in this digital age. 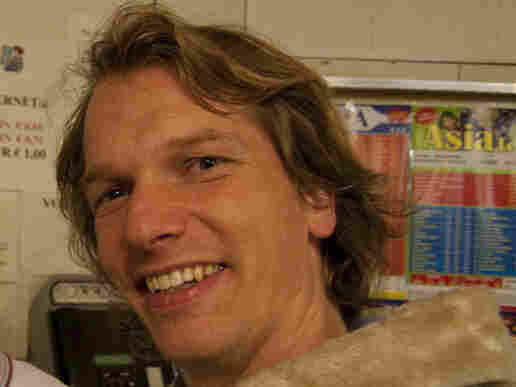 Bartholl is himself an artist navigating that divide between media artist and digital artist; something that often means “taking something very familiar ... and putting it in a different context,” he explained.

But whether or not this particular context will work is still up for debate. As many before me have noticed, blindly plugging your laptop into an unknown drive is pretty much asking for trouble in the form of viruses and other unsavory files. Yet that’s really not that different from the internet itself, Bartholl points out.

"It happens all the time on the internet; you are like two clicks away from some virus, on some website," he said. "And we know that, but people don’t care because they sit at home in this safe place.

"That’s what I’m interested in -- the moment you put something up and it’s literally in the street, literally in the wall, people immediately think it’s much more dangerous than the internet." he said.

Others wonder how long the poor USB drives can survive the elements or even the physical vandalism they face. (As of this posting, one of the original "Dead Drops" has already been destroyed.) But according to Bartholl, it’s not necessarily a permanent project.

“They live as long as they live," he said. "I will check back and maybe replace them when someone rips them out. It’s a bit like those street art projects: You set it up and you put it out there and then it’s just open for whatever happens.”

Although he isn’t planning on keeping a record of the data, that’s part of the project. If people find something they like, they can download the data and put back out on the internet again. To Bartholl, the tangible data that remains is more important. That even plays a role in why he chose this format.

“I like the USB port," he said. "I think it’s a very important port and sooner or later we will lose it. Because you see already the iPad has no USB port anymore and in the future, all our data will be in (the cloud). The moment it’s in the cloud or some server, they will at some point decide what you can have on your disk and what you can’t.”

As for what’s on these devices two weeks into the project, Bartholl prefers to let the mystery remain. That is, let people find out on their own.