Accessibility links
Google Makes Play For Piece Of E-Books Market : All Tech Considered The search giant's foray into the market lets users read its electronic books on any Internet-connected device -- except Amazon's Kindle.

The market for electronic books just got a little more competitive. Google is rolling out an online retail store that will sell e-books from some 4,000 publishers, including all of the major houses.

Just before Monday morning's launch, I got a look at the new website. On the surface, it doesn't look much different from the Amazon or Apple e-book sites.

Google's e-books are nothing fancy -- no bells and whistles. They don't have 3-D pictures or social networking. You can't just put your finger on a word and get the dictionary definition like you can with the iPad. Dougall said Google doesn't want to interfere with the reading experience "because ultimately the book and the story are ... the most valuable property."

What sets Google's service apart from the other two retailers is that its e-books are stored online, so they can be read on almost any Internet-connected device -- a desktop computer, a laptop, a smart phone. Once you buy a book, you just sign into your account and read. If you will plan to be out of Internet range you can download your books.

Mike Shatzkin, a book industry consultant, says he thinks that will open up e-books to a lot more people. "What Google is doing is enabling anybody with a Web browser to have an e-book experience. That means probably that we're going to see far more titles than made sense in the previous e-book world." 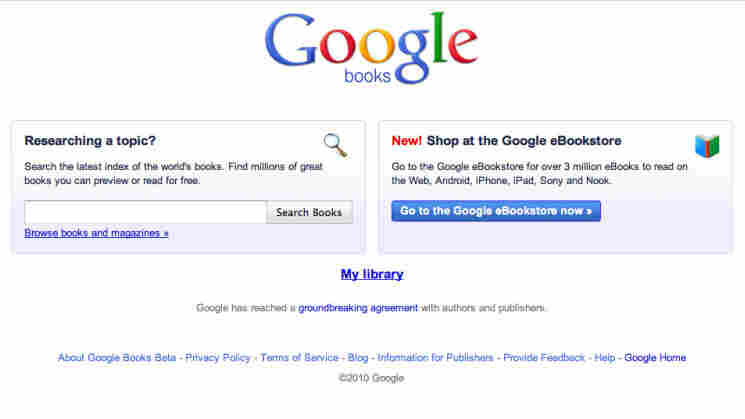 Google already has scanned millions of books and put them online as part of its partnership with 40 libraries around the world. It's clearly entering the e-book market as a competitor to the leading seller, Amazon. Google's e-books can be read on the iPad, Barnes and Noble's Nook and Sony's eReader but not on Amazon's Kindle.

Shatzkin says publishers welcome the competition because they've been worried that Amazon might try to take over the publishing industry.

"If e-books are your target market ... and you can reach it through one stop, then you don't need a publisher," Shatzkin said. "What you need a publisher for is to get you to lots of points of distribution."

Unlike Amazon, Google is encouraging more "points of distribution" and giving independent booksellers access to a market that they've been locked out of.

"We always get sort of portrayed as being these Luddites because we didn't have the money to throw at the technology to do this," says Michael Tucker, president of the American Booksellers Association. "The nice thing now and a little bit of what's happening at Google is there's a certain democratization of the technology."

Tucker says independent booksellers will get a cut of the revenue when people buy e-books on their local seller's website instead of directly from Google. He says local and Google prices will range between $9.99 and $12.99.

Having independent publishers doing some of the selling could also help Google, which is new to the retail business. The search giant didn't do so well the last time it tried to sell directly to consumers with its Nexus One smart phone. There were a lot of complaints about customer service, and Google no longer sells the phone.

Tucker says big publishers are willing to split revenue with local stores because they don't want the independent booksellers to go out of business. He says they need each other.

"If you don't have stores, they don't have thousands of people who are dedicated to selling their own books or to selling books in general. And where would you have author signings? Where do you have book clubs? Those don't exist online," he says.

Analysts expect that many more books are going to become available online. This year, close to a billion dollars in e-books will be sold, and the research firm Forrester predicts that number will triple by 2015.

Publishing consultant Shatzkin thinks Google is hitting the market at just the right time. "In the next 10 years, 80 percent or 85 or 90 percent of consumption is going to be e-books."

From The Monkey See Blog

Test-Driving Google Books: The Good, The Bad, And The Competitive Spirit Dec. 6, 2010