Accessibility links
What The Critics Don't Get About Tron : All Tech Considered Critics have slammed the film Tron: Legacy, some asking if it should've even been made. NPR's Andy Carvin disagrees. "Tron isn’t just a movie. It’s a meme that a whole generation of geeks like me have been cherishing for nearly 30 years." 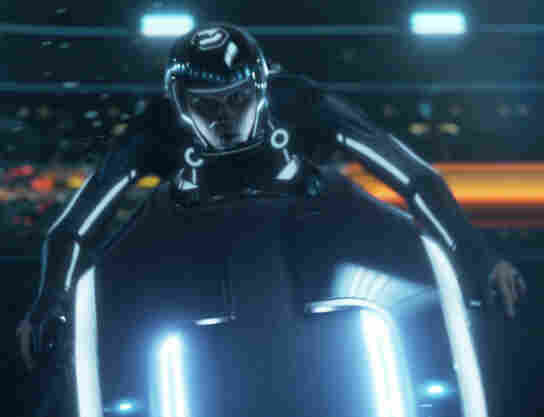 If you put a bunch of film critics in a room and ask what they think of the movie Tron: Legacy, you’re likely to get a dismissive shrug. The film is already drawing mixed reviews. Just don't tell that to the tens of thousands of fans on Twitter eager to attend Friday's premiere.

Nonetheless, the critics aren't thrilled with it. “They had 28 years, and this is the best they could come up with?” asks James Berardinelli of ReelViews. Adds Mark Jenkins in a recent NPR.org commentary, “Tron Legacy probably exists just because nothing in Hollywood's compost heap ever fully decomposes. Every flop is worth another try, or at least a studio-exec pitch.”

There’s that word: flop. It seems it gets tossed around a lot when critics discuss the original 1982 film, Tron, leading to the conclusion that Tron: Legacy should never have been produced in the first place.

I beg to differ.

As a kid growing up in the late 70s and early 80s, there were three movies that were seminal for me. Two of them, Star Wars and Raiders of the Lost Ark, probably aren’t a huge surprise, given their massive popularity and critical praise. But the third seminal film for me was Tron.

All of my friends were blown away by the film. We couldn’t stop talking about it. We obsessed over the video game version – so much so I remember a coder friend of mine spent an entire day with me and my nine-year-old brother programming a rudimentary version of the "light cycle" game from the movie on an IBM PC. Other friends took a crack at making a Dungeons and Dragons-like roleplaying game out of Tron. (No need to mention I was a nerd; I've come to terms with that.) We spent weeks trying to come up with the rules for the game, albeit not very successfully.

Star Wars and Raiders were great films, and are still among my all-time favorites, but they didn’t inspire us to literally build stuff from scratch. We knew it wasn’t a perfect film, but we loved its technological wizardry nonetheless. In that respect, Tron was the Avatar of its time.

Now it’s easy to dismiss the original Tron because of its meager box office draw when it came out in 1982. With a budget of $17 million, Tron managed to make a profit, grossing $33 million. Admittedly, it was drowned out by the extraordinary success of E.T.: The Extra-Terrestrial. With just a $10.5 million budget, E.T. earned nearly $792 million worldwide. As far as box office receipts go, E.T. bested Tron by a 24-to-1 ratio. As far as Hollywood and the critics were concerned, E.T. spanked Jeff Bridges and his Tron compatriots, no doubt about it.

But that doesn’t mean it didn’t leave a lasting legacy, as it were.

For one thing, it’s pretty clear that Tron has a loyal following online. If you look at the Wikipedia entries for both Tron and E.T., they’re surprisingly similar in the amount of fan support given to them, despite the yawning gap between the two at the box office. The Wikipedia entry for E.T. has around 4,300 words and has been edited just under 2,000 times. Tron, meanwhile, is 3,600 words long and has received over 1,700 edits. Yes, E.T. wins on both counts, but not by much. So despite the fact that critics are dismissive of Tron, its fans have lovingly documented it on Wikipedia with almost as much intensity as E.T.’s fans.

Now let’s talk buzz for a moment. One would assume that a sequel to a “flop” would generate little enthusiasm among the public. If you look at Twitter, though, that hasn’t been the case. Twitter has become a fairly accurate barometer of how people feel about a film.

Tron, in contrast, has been mentioned on Twitter more than 90,000 times in the last week, and 232,000 times in the last month. And despite the fact that there have been several Narnia films in recent years, Tron still bests Narnia if you look at the entire history of tweets since 2006, generating 486,000 tweets versus Narnia’s 254,000 tweets.

More broadly, Tron: Legacy is generating huge buzz in the geek community. Techcrunch, one of the most popular and respected tech blogs, has rented out entire movie theatres in New York and San Francisco for fans to watch the movie tonight. And Techcrunch isn’t the type of blog to do that for every movie that comes across the cinematic transom. They did it because they know that their kind of people – Internet power users and online influencers – are going to go gaga over the new film, whether it’s good or not.

So critics, bring on those reviews. We don’t care if either Tron film is mediocre from your perspective. To us, Tron isn’t just a movie. It’s a meme that a whole generation of geeks like me have been cherishing for nearly 30 years.