Accessibility links
Jimmy Wong Saves The Internet : All Tech Considered Cyberbulling is here to stay and is far-reaching, as we know from recent rant by a UCLA student, but technology also allows for new ways of creative verbal jujitsu. 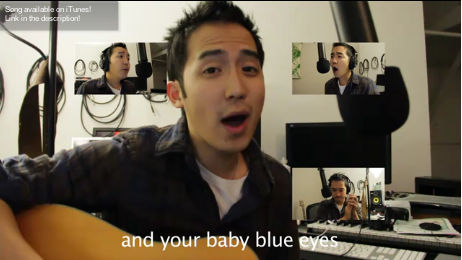 It seems like a great time to be a bully. When I was a kid, even the most productive bullies could only manage a handful of victims at a time. What used to take a lot of effort can now be handled with a couple thumbs and some Wi-Fi. A hateful rumor can spread a lot faster on Facebook than it could on the school bathroom wall.

And while it used to require a certain set of characteristics to thrive as a bully, the internet makes it simple for almost anyone to graduate from cowering weakling to kicking virtual sand in the face of friends and strangers in no time. If you've spent more than five minutes reading Internet comments, you know that being a cyberbully requires about the same level of exertion and fortitude as screaming obscenities at other drivers while you cruise down the freeway with your windows rolled up.

And the bullies have figured this out. Cyberbullying has become so prevalent that several states are considering the enactment of laws targeting its perpetrators. The federal government even has a site dedicated to the troubling trend.

The connection between bully and target is so seamless that hate speech can often spread more rapidly than its originator ever intended. One assumes that's the case with UCLA student Alexandra Wallace, who recorded a three-minute rant against Asian students, in particular those who use cell phones in her school library. In the video, which she posted on YouTube, Wallace shared her version of the Asian language (including several ching chongs and ling longs), urged Asians who come to UCLA to first adopt "American manners," and for good measure even managed to work in a reference to the tsunami in Japan.

(The original video was pulled from YouTube. This is one of many re-posts. --Ed.)

The video went viral. Its contents and the reaction it generated made it all the way to the pages of The New York Times. In a previous era, it would have taken Alexandra Wallace several lifetimes to even encounter as many Asian students as she managed to offend in three minutes.

I'm sure Wallace regrets posting that YouTube video — and will likely continue to suffer the repercussions thanks to the web's reach and permanence. But the ease with which it was produced and the pace at which it went viral is another indicator of just how easy it is to spread hate in the Internet age.

Tomorrow's kids — in addition to facing the usual natural disasters that come with adolescence — will be confronted with the multichannel, always-on, upsettingly viral slings and arrows of bullies. Although Alexandra Wallace is a far cry from the worst of bullies, the whole incident left me feeling depressed about the future.

But then I saw Jimmy Wong.

Jimmy Wong reminded me that the tools that can be deployed by the so-called cyberbullies are also freely available to those they harass. Wong, a 24 year-old singer, and up-and-coming YouTube sensation, wrote and recorded The Asians in the Library Song in response to Alexandra Wallace's video. Here's part of the chorus.

I pick up my phone and sing...
Ching Chong, it means I love you
Ling Long, I really want you
Ting Tong, I don't actually know what that means

The lyrics are funny and good-spirited, and effectively turn the tables on the original rant. And the song itself has a catchy hook, has been viewed about 800,000 times, and is now for sale on iTunes.

When I was a kid, here's one thing I never thought of saying to a bully who was about to pummel me:

"Hey, don't mess with me. I've got a quirky sense of humor, a great singing voice, and I know how to code!"

But Jimmy Wong and many others are proving those types of creative skills could be a decent way to put up a defense.

Modern victims of bullying have a much broader arsenal of tools with which to defend themselves. I'm reminded of those old match box covers that featured a Charles Atlas advertisement with the line:

"Tired of having sand kicked in your face?"

Back then, the ad was for a muscle building program. A Jimmy Wong era version of that ad could read: "Tired of having sand kicked in your face? Get a video phone, take singing lessons, practice Photoshop, and learn to develop snappy retorts that are shorter than 140 characters."

None of this is intended to suggest a future free of bullying or a panacea that helps all the little guys win in the end. But in some ways, the playing field has been leveled. It's not just about being physically tougher or being the type of person who thrives on conflict. Sometimes it's about being smarter, funnier or more creative. And — Ching Chong — I really love that.

Maybe it's still a decent time to be a bully. But it's an even better time to be Jimmy Wong.