Accessibility links
Game Your Facebook Status: The 'Via' Spoof And Your Gullible Friends : All Tech Considered Facebook status updates have been blamed for both break-ins and break-ups. Now the "via" feature — which shows the source (device and/or service) of a status update — can let you claim to be communicating from outer space, or via Morse code.

Facebook status updates have been blamed for both break-ins and break-ups. And the "via" feature — which shows the source (device and/or service) of the status update — comes across as both an invasion of privacy and free advertising. 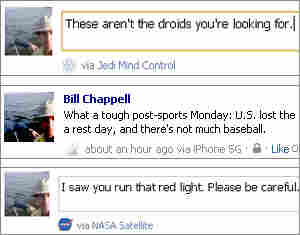 Thanks to some tossing around of ideas on Reddit, there's now a whole host of spoofy sources you can claim to have used to send your status update. And there's even a page that can help you quickly adopt any source you like.

Be Warned: A couple of the sources use unsavory words or phrases. Not sure if you've noticed, but the Internet isn't real big on subtlety.

Beyond the silliness and geeky satisfaction of letting you claim to be posting from your Commodore 64, the status trick also provides an extra level of comment — and even more humor than a normal status message (!).

"Help, everybody. Our web site has crashed." via Morse Code

"Technology is overrated." via Carrier Pigeon.

The trick relies on Facebook's use of API keys to identify the source. We can only hope the company doesn't snuff this creative use of a mundane feature. (Oops! Did I just jinx it? Because just after writing this, the iPhone 5 option went away.)

Here's a timely one to get you started: via NASA Satellite. If you're already logged in to Facebook, click here and write your status, then hit Share. Your new status, complete with colorful and tasteful NASA logo, will appear on your wall, and anyone's wall that'll have you.

Perhaps the most mystifying status source on the list is via Glade Air Freshener. In this era of product placement, I wouldn't put it past S.C. Johnson & Son to have set that up. But it's a great non sequitur — and even poignant, if you're someone coping with problematic roommates. The status was a hit with some commenters on Reddit, as well.

As someone with the ID guns_of_navarone posted: "Sent via Glade Air Freshener — Yes. Just yes."