Accessibility links
Steve Jobs Dishes On The Tech Business In 'Lost Interview' From 1995 : All Tech Considered When he died on Oct. 5, Steve Jobs was eulogized as the tech visionary who put elegantly designed gadgets into the lives of people who often hadn't realized the devices were essential — until Jobs, and Apple, created them. A recently recovered 1995 interview offers another chance to hear from the late CEO. 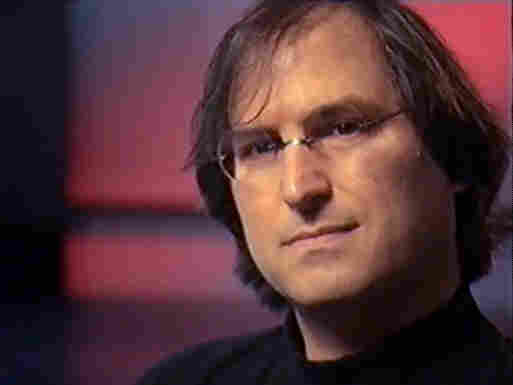 When he died on Oct. 5, Steve Jobs was eulogized as the tech visionary who put elegantly designed gadgets into the lives of people who often hadn't realized the devices were essential — until Jobs, and Apple, created them. This week, Jobs' admirers will have another chance to hear him speak, thanks to the film Steve Jobs: The Lost Interview.

Only a small portion of the footage, which was once thought to have been lost, has been seen before. Ten minutes of it aired on TV in 1995; in late October, 60 Minutes used excerpts from the tape to flesh out its interview of Walter Isaacson, Jobs' official biographer.

Taped toward the end of Jobs' tenure at NeXT, where he took a nearly 12-year timeout after his ouster from Apple in 1985, the interview was conducted by Robert Cringely, a veteran technology writer and documentary filmmaker, for his PBS show Triumph of the Nerds.

Within two years of the interview, Jobs would return to Apple.

Watching the footage is like seeing a time-capsule version of Jobs, who wears glasses and (what else?) a black mock turtleneck. He is, by turns, playful, defensive and brutally honest — sometimes within the span of one story.

Here's a trailer for the film:

A trailer for the new documentary film release, Steve Jobs: The Lost Interview.

Jobs' topics include IBM, Xerox, Microsoft and Adobe — in fact, he says, he talked Adobe's founders into developing software instead of hardware.

The master tape of the hourlong interview was lost — but in early October, Cringely's director found some VHS copies of the interview, stashed away in his garage in Britain. On Twitter and his blog, Cringely asked his followers what he should do with the footage.

No one, he says, suggested a theatrical release. But Cringely says he wanted to create "a social experience" for people viewing the interview. For now, it's being given very short runs of between two and three days in about 20 U.S. theaters operated by Landmark.

"The idea came to me late at night so I e-mailed Landmark owner Mark Cuban who replied in five minutes," Cringely writes, "proving insomnia has its virtues."

With a running time of a little more than an hour, the documentary is a straightforward affair, showing one camera angle of Jobs, who sits in the museum-like room, with a large monitor in the background. Sitting in front of the camera, Jobs does pretty much what a fan would want him to do: He tells stories, prodded along by Cringely.

One of Jobs' stories is about meeting his longtime collaborator Steve Wozniak, when Jobs was around 14 or 15 years old. Wozniak was five years older; he had been kicked out of his first college for playing pranks, Jobs says.

But Jobs also calls Wozniak "the first person I met that knew more about electronics than I did."

The first big project by the men who would go on to found Apple involved two things that, with hindsight, make an elaborate prank seem prescient. Those things were telephones and AT&T.

Jobs and Wozniak were inspired by a story in Esquire about a man named "Captain Crunch," who had built a device that let him make free telephone calls. The idea was to use a device called a Blue Box to mimic the sounds used by phone companies.

So in 1971, the two friends hit the library, Jobs says, "looking for the secret tones that would allow you to do this."

To be precise, the coveted tones were similar to those produced by a touchtone phone — but in a different, and specific, frequency.

"And it turned out that we were at Stanford Linear Accelerator Center one night," Jobs said — and after looking deep in the bowels of the center's technical library, they found a copy of an AT&T technical journal, which contained all they ever wanted to know about the special phone company tones.

"AT&T made a fatal flaw when they designed... the original digital telephone network," Jobs said. "They put the signaling from computer to computer in the same band as your voice. Which meant that if you could make those same signals, you could put it right in through the handset. And literally, the entire AT&T international phone network would think you were an AT&T computer."

It took Jobs and Wozniak three weeks to make their first box. And then they made their first long-distance call — "for free!" Jobs said.

With their device in hand, Jobs and Wozniak learned all the codes they needed to route phone calls through cables, networks and satellites.

"You could go around the world five or six times," Jobs says, "and then you could call the payphone next door. So, you could shout into the phone, and after about a minute, it would come out the other phone. It was miraculous."

That might not sound like the best use of anyone's time — let alone that of two creative, industrious young men. But Jobs says it's important to remember just how young they were.

And the experience led them to take up more projects.

"I don't think there would ever have been an Apple Computer had there not been blue-boxing," Jobs says — a somewhat jarring thing to hear in 2011, when Apple reigns as one of the world's most valuable companies.

The two even put a small logo on the bottom of their blue boxes, Jobs says. It read, "He's got the whole world in his hands."

And they eventually used their blue box — bragging a bit, Jobs says that it was completely digital, and the best on the market — to make an international prank call to the Vatican.

With Wozniak doing his best imitation of Henry Kissinger, Jobs said, "We got the number of the Vatican and called the pope."

Their call went through, and the request from the man claiming to be the U.S. secretary of state began making its way through the hierarchy.

"They actually sent someone to wake up the pope," Jobs said, "when finally, we just burst out laughing, and they realized that we weren't Henry Kissinger. So, we never got to talk to the pope. But it was very funny."

The Missteps Of Tech Giants

Some of Jobs' harshest words are for companies that gain a monopoly position, but "forget what it means to make great products." He's harsh on the companies — and the people who run them.

In those cases, "the people that can make the company more successful are sales and marketing people," Jobs says, "and they end up running the companies" while people tied to product development are shut out of the decision-making process.

But he's not done there: "And they really have no feeling in their hearts, usually, about wanting to really help the customers."

That's a scenario that might give some unwelcome food for thought to investors and fans of Apple, which has lost its most visible, and product-obsessed, innovator.

But in this scenario, Jobs is discussing Xerox, where, Jobs says, innovative engineers had invented a template for where the personal computer was going. But Xerox famously failed to capitalize on it — something Jobs blames on the company being run by "toner heads" who were preoccupied by maintaining its printing business, instead of exploiting the possibilities represented by the computer.

A Reputation For Design, And Being Demanding

Of course, Jobs' ability to be acerbic and blunt has become part of the lore that has surrounded the late CEO. And the lost tape shows signs of his demanding, design-oriented side, as well — an aspect of his personality that is highlighted by Malcolm Gladwell's recent article for The New Yorker.

Titled "The Tweaker," the article draws from stories and anecdotes in Isaacson's biography — and effectively ensconces Jobs in the hall of fame of inventors and craftsmen that extends back to the early days of the Industrial Revolution.

Discussing innovators and product craftsmen in the Lost Interview, Jobs stresses the vital role they play in companies.

To illustrate his point, he recalls how difficult it was to produce something that has since become ubiquitous: the mouse. He knew what he wanted. But others at Apple insisted that they couldn't build one for less than $300 — and it would take five years to do it.

"The problem was that we'd hired a bunch of people from Hewlett-Packard," Jobs said. "And they didn't get this idea. They didn't get it."

Among their shortcomings, he says, was having "no concept of proportionally spaced fonts" or the mouse.

"I finally got fed up," Jobs says. He went to an outside design firm, run by David Kelley.

"And in 90 days, we had a mouse we could build for 15 bucks, that was phenomenally reliable," he says.

Of course, thanks in part to Apple's advances in touch-screen and swiping technology, the mouse is now in danger of being made obsolete.

For anyone who believes that the many stories about Jobs' obsession with detail, how he edits ideas down to an elegant, and efficient, state, are blustery sales pitches — the Apple co-founder has a rebuttal.

He begins by noting that often, the difference between the absolute best things in the world, and similar things that are merely average, isn't very extreme.

Jobs says that in "most things in life, the difference in dynamic range between 'average' and 'the best' is, at most, 2 to 1." And often, they're only separated by a 20 percent gap, he says.

"In software," Jobs says, "the difference between average and the best is 50 to 1. Maybe 100 to 1. Very few things in life are like this. But what I was lucky enough to spend my life in, is like this."