Accessibility links
Xeni Jardin Tells Twitter Fans She Has Breast Cancer : All Tech Considered Journalist Xeni Jardin has learned that she has breast cancer. Jardin, the co-editor of Boing Boing, the tech and culture news site she helped to found, announced the news via Twitter Thursday. She kept her followers informed with tweets from the screening clinic, including several photos. 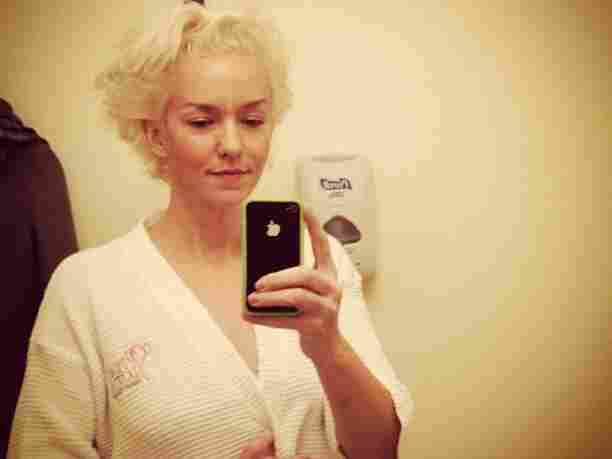 Xeni Jardin photographs herself at a breast cancer screening clinic Thursday. Posting the photo on Twitter, she wrote, "Instagrammed my mammogram. The cloth gowns at @pinklotusbc make you feel like its gonna be ok." Xeni Jardin hide caption 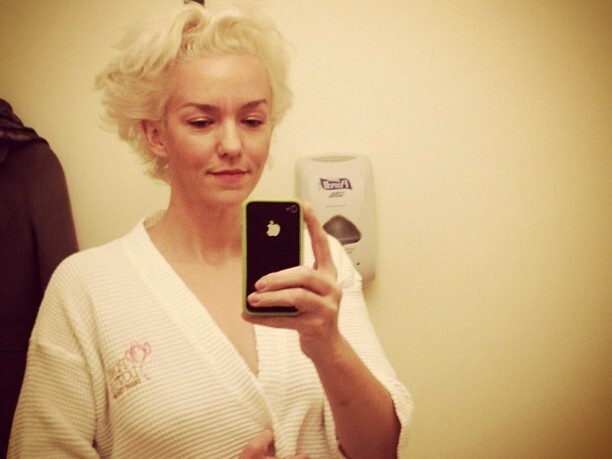 Xeni Jardin photographs herself at a breast cancer screening clinic Thursday. Posting the photo on Twitter, she wrote, "Instagrammed my mammogram. The cloth gowns at @pinklotusbc make you feel like its gonna be ok."

Technology writer Xeni Jardin has learned that she has breast cancer. Jardin, the co-editor of Boing Boing, the tech and culture news site she helped to found, announced the news via Twitter Thursday. Earlier that day, she had been keeping her thousands of followers informed, with tweets from the clinic where she underwent the exam.

Update at 9:35 p.m. ET: In an email, Jardin tells me that her initial diagnosis was confirmed Friday, after a biopsy. As a commenter on this post has noted, the facility she used, a comprehensive breast center, provides test results more quickly than other screening clinics might. Our original post continues:

For Jardin, 41, getting a mammogram began as a precaution, became a Twitter event, and finally culminated in the diagnosis that many women dread. Two of her friends had been diagnosed with breast cancer this year, she wrote.

Jardin's work has helped chart the shifting digital world, often highlighting how the latest news affects regular folks. And in that tradition, for her first mammogram, she created the hashtag myfirstmammo, letting her followers track her progress.

"I decided the experience of getting a mammogram would be less scary if I tweeted about it, mocked it, or turned it into a game," Jardin told her followers on Twitter.

She also joked about using Yelp to find her clinic, as if she were looking for a good place to eat brunch. And it seems that the wait of several hours grated on her. "I'm so used to instant results," she tweeted. "Bam! I wish the radiologist could just Google my boobs and go, "You have great SEO!"

But then her own diagnosis came. Here's the tweet with which Jardin broke the news:

"I have breast cancer. I am in good hands. There is a long road ahead and it leads to happiness and a cancer-free, long, healthy life."

An outpouring of support immediately followed, with a follower named miixxy tweeting, "Occupy That Cancer, @xeni!!! tech sisters, solidarity for one of our own. if anyone could cyber-cure herself, it'd be Xeni!"

Here at NPR, Jardin is on the minds of many. She is a longtime contributor who recently weighed in on subjects from services that 'boost' Facebook profiles to the decade in technology, 2000-2010.

Reporting for the now-defunct show Day to Day, Jardin followed a wide range of stories that include piracy and free speech issues — and, in 2007, the case of Mingering Mike, a man who hand-illustrated his own elaborate album covers.

At Boing Boing, Jardin hosts the brand's Boing Boing Video series, for which she also serves as executive producer.

We'll be looking for more news about Jardin's condition and any possible treatment. Late Thursday, she posted a note of thanks to her followers and those who have written her notes of encouragement:

"Thank you for all your sweet wishes of love and support. The kindness of friends both old and new keep me afloat in uncharted waters. Love."