Accessibility links
Soon Facebook Growth Will Be About Users Clocking In More Time : All Tech Considered As the number of new Facebook users plateaus, the company will have to find ways to draw individual users in for longer periods of time if it hopes to keep ad profits growing. 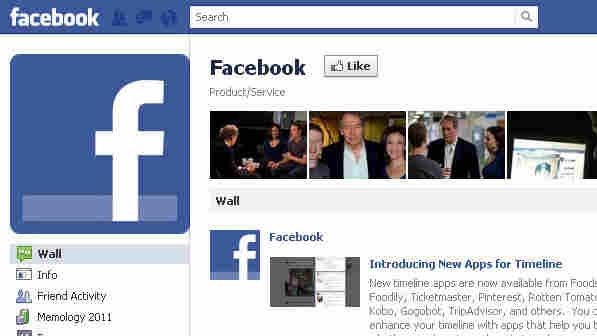 In its Feb. 1 initial public offering, Facebook announced that it had generated $3.71 billion in revenue in 2011, up from $1.97 billion the year before. via Facebook hide caption

The number of new American Facebook users is going down, and eventually the same will happen in every other market. Soon, Facebook's growth is going to depend on each user spending more time logged in, playing games, watching movies, planning trips and so on.

If you do the math and divide Facebook's value ($100 billion) by its number of users (845 million), that makes every Facebook account worth about $125 — money the company will get from eyeballs on ads. So the longer you're on Facebook, the more ads you look at and the more money the company makes.

That means Facebook would most likely be happy to hear that Duke University junior Justine Hong uses its iPhone app on walks across campus to keep abreast of the news.

Investors Will Get To Friend Facebook By Late Spring Feb. 1, 2012
Facebook IPO: Worth The Price Or Next Internet Bubble? Jan. 30, 2012

"I can open the app as I walk to class or whatnot and see if there's a campus editorial from the campus website that's been getting a lot of comments or a national news story that my friends have been sharing a lot," Hong says. "It's pretty convenient and quick when I don't have time to actually read a paper."

Facebook also has apps for games, shopping, videos, movies and chatting. Last year, it integrated the music service Spotify, a feature that has kept Facebook user Liam Passmore logged in even longer.

"One of the elements of Spotify that really attracted me is the ticker on the side of Facebook," Passmore says. "You can see what your friends are listening to on Spotify."

For example, the other day, Passmore was at the roller rink when he heard a song he liked. He says he was a little surprised when his friend's 9- and 12-year-old kids told him the singer was Selena Gomez, of Justin Bieber relationship fame, and he wanted to share his amusement.

"I went to Spotify and played it on my Facebook account to let people know I was listening to Selena Gomez so they could comment back," says the 54-year-old.

Passmore's is another story Facebook executives would most likely be happy to hear. He's spending more time on the site, and that is exactly what Facebook needs, says Michael Pachter, a Wedbush analyst who follows the company.

"Ultimately, it's an advertising model; and ultimately, the longer you're on the site, the more information they have about you, the more they can advertise directly to you," Pachter says. "So clearly the more engaged the user, the more profitable that user will be."

Pachter says one strategy the company is starting to use more is to connect with popular websites, so when you sign in to your favorite newspaper site or game site you can use your Facebook username and password.

Justin Smith, the founder of Inside Network, which is dedicated to researching Facebook, says, "Facebook's strategy will be to increase penetration amongst many of the most popular websites where people are spending their time, instead of only being available when people come to Facebook.com."

A lot of people think it would make sense for Facebook to build its own phone or develop its own mobile operating system. The caveat for Facebook's strategy of becoming a portal to everything on the Internet is that many users like Duke student Hong aren't signing up.

"I think it gets a little bit scary when you're sharing a lot of information via your Facebook account," Hong says.

But with new pressures from Wall Street, Facebook is certainly going to try hard to lure Hong and other users deeper into its universe.