Accessibility links
Twitter Diplomacy: State Department 2.0 : All Tech Considered Diplomacy in the age of social media is transforming the way ambassadors do their jobs. From tweets to Facebook posts, the State Department is encouraging ambassadors to get their messages out in new and different ways. 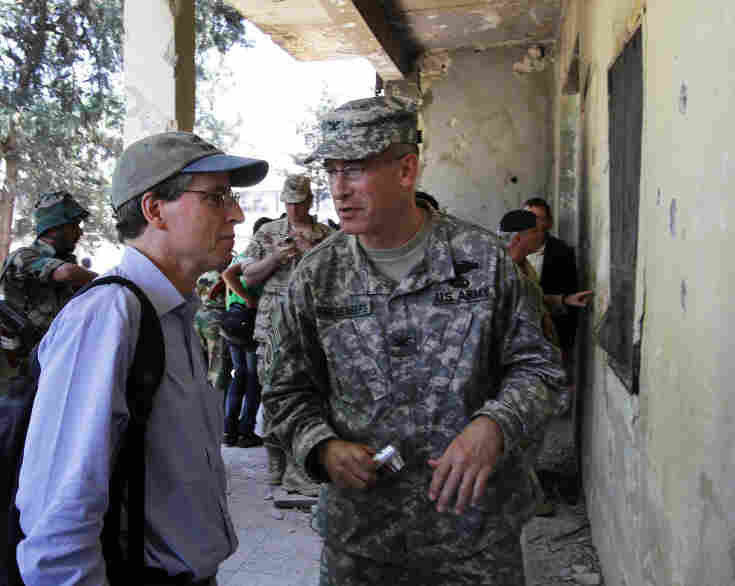 Robert Ford (left), the U.S. ambassador to Syria, speaks to an unidentified U.S. military attache during a guided government tour in the northern Syrian town of Jisr al-Shughur last June. The U.S. has closed its embassy in Syria owing to security concerns, but Ford is using Facebook to stay involved in the country. Louai Beshara/AFP/Getty Images hide caption 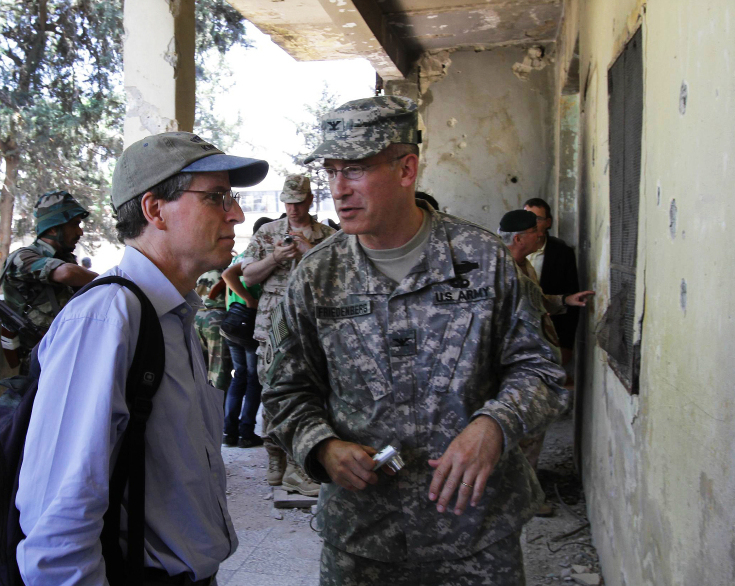 Robert Ford (left), the U.S. ambassador to Syria, speaks to an unidentified U.S. military attache during a guided government tour in the northern Syrian town of Jisr al-Shughur last June. The U.S. has closed its embassy in Syria owing to security concerns, but Ford is using Facebook to stay involved in the country.

The U.S. evacuated the staff of its embassy in Damascus earlier this month owing to security issues. But that hasn't stopped Robert Ford, the U.S. ambassador to Syria, from using social media to keep in touch with events on the ground, and to try to shape them.

On the embassy's Facebook page, for instance, Ford has posted satellite images of tanks moving on cities and a pipeline fire spreading toxic fumes.

Ford is part of a new generation of diplomats using online tools such as Facebook and Twitter to get their message out. In fact, these days, U.S. diplomats take a course in what one State Department official calls "21st century statecraft" before they head out to their assignments.

Today if somebody is lying about you in the media ... we now have the tools to get the real facts out there.

"I tell all our ambassadors, remember, you only have one mouth but you have two ears, so use this as a way not just of communicating with the citizens of the country where you are serving, but also understanding the point of view of people who may not be sitting at a mahogany table inside the embassy," says Alec Ross, the State Department's senior adviser on innovation.

Sitting at such a table in the State Department's rare books room recently, Ross says it wasn't an easy start for Ford, the ambassador in Syria. He had early run-ins with pro-government bloggers, known as the Syrian Electronic Army.

But instead of "curling up into the fetal position," says Ross, Ford responded to the Syrian Electronic Army's misinformation. Many Syrians also turned against the pro-regime bloggers, who then retreated, Ross says.

Ross points to another ambassador, Michael McFaul in Russia, who is using social media to counter what's being said about him in the Russian press.

"Today if somebody is lying about you in the media — and there have been plenty of things that are factually inaccurate written about Ambassador McFaul — we now have the tools to get the real facts out there," Ross says.

McFaul seems to be online 24 hours a day, batting back rumors, writing about his reset of relations with Russia or talking about date nights with his wife. John Brown, who teaches public diplomacy at Georgetown University, wonders if the ambassador can keep up that pace.

"I'm concerned about this, as someone who was involved in public diplomacy for over 20 years on behalf of our government, mostly in Eastern Europe, and ultimately, what's most important about public diplomacy in my view is not Facebook to Facebook, but face to face," he says.

Brown also says that the State Department still seems to be of two minds, promoting social media while also trying to control the message and keep tabs on personal blogs of foreign service officers.

As well, he says that given the 140-character Twitter limit, the State Department should hire a modern Emily Dickinson: "We could have these wonderfully short messages, but at the same time poetic and full of meaning," he says.

Former State Department spokesman P.J. Crowley was known for his pithy tweets — and for the heartburn they occasionally caused. For example, here's one of his tweets last year, after a government shake-up by Egypt's then-President Hosni Mubarak: "Egypt can't just reshuffle the deck and stand pat."

Crowley says the bureaucracy needs time to get used to these tools.

"Twitter is the ultimate tool for one-liners. I once had a tweet on some subject and someone was concerned about it and said, 'You lost the nuance,' " Crowley recalls. "And I said, at 140 characters, there is no nuance to Twitter."

Taking Risks, But Not Too Many

Crowley, who now teaches at Penn State's Dickinson School of Law and School of International Affairs, says ambassadors will undoubtedly get into trouble every now and then. But to be effective, they have to put themselves out there.

"The conduct of diplomacy is going to have to be much more decentralized than it has in the past, and that involves educated risk-taking," Crowley says. "That's the kind of thing you see a Mike McFaul and Robert Ford doing. They got to their posts and rather than sitting on the sidelines, they jumped into the pool."

The ambassadors to Thailand, Zimbabwe and Japan are winning high praise from Ross, the State Department's social media guru. He doesn't sound too worried about missteps.

"Social media is a lot less risky medium than live television — you can edit yourself, you can think ahead of time before you hit send," Ross says. "I actually think that if you look at the vast amount of communication that this administration has done over social media over the last few years, it's actually shocking that there have been as few mistakes as there have been."