Accessibility links
So Pinterest Is A Woman's World. Does That Matter? : All Tech Considered Pinterest, which has drawn lots of media interest and millions of users, has been tagged "digital crack for women." But while most users are female, men are finding ways to use the social media site, like Drew Hawkins' "Board of Man." 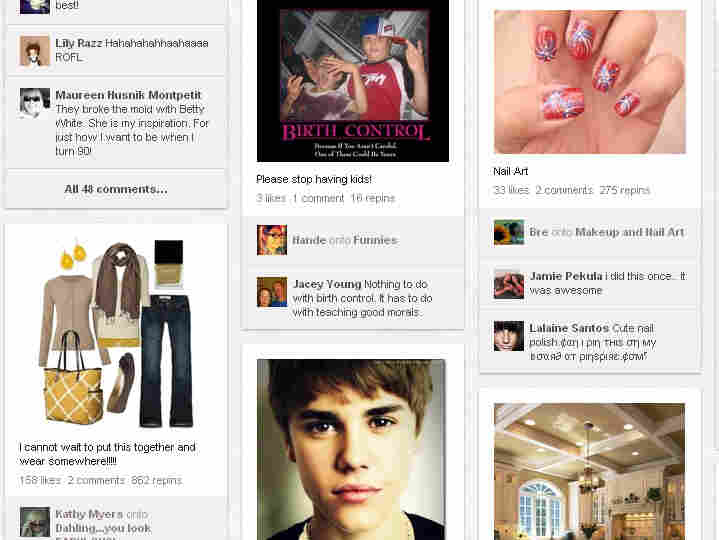 A visit to the Pinterest homepage typically reveals images of makeup, women's fashions — and the occasional "pin" of Justin Bieber. via Pinterest.com hide caption 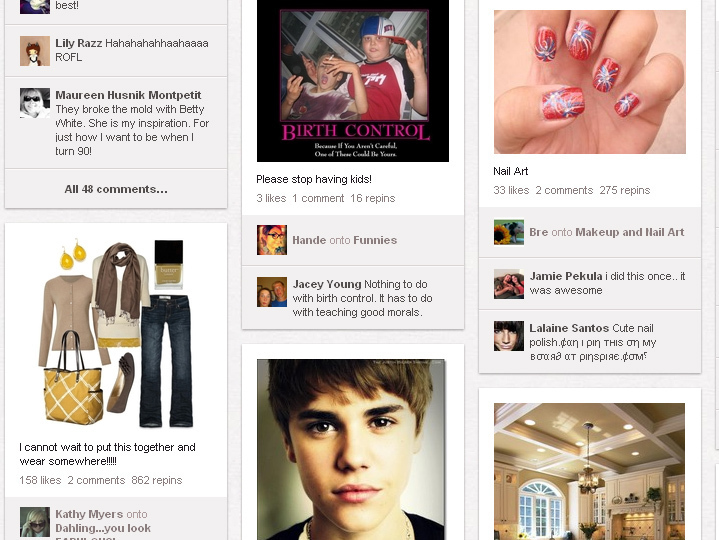 A visit to the Pinterest homepage typically reveals images of makeup, women's fashions — and the occasional "pin" of Justin Bieber.

Unless your Internet connection has been disabled for the past month, you've undoubtedly heard of the new darling of the social media world: Pinterest.

The simple and highly visual site lets users save — or "pin" — coveted outfits, recipes, home décor ideas and do-it-yourself projects on virtual bulletin boards, for their own use and to share with others.

And while the site has been around since late 2009, Pinterest has experienced an almost meteoric rise in monthly unique visitors of late. According to data from the Internet analytics firm comScore (and first reported by TechCrunch), unique monthly visitors to the site jumped from approximately one million in July to more than 11 million last month.

Beyond its visual appeal, another thing quickly stands out on a first visit to Pinterest: a somewhat feminine orientation. The opening page is wallpapered with images of women's outfits, DIY craft projects, recipes and wedding dresses. According to various reports, 58 percent to 97 percent of Pinterest users are female.

Whatever the exact figure, the site's been tagged as everything from "digital crack for women" to "Tumblr for ladiez." And anecdotally, many female users report that their male friends "just don't get it." Journalist David Kirkpatrick, author of The Facebook Effect, recently channeled on his Facebook wall how many men may think about Pinterest:

I love how many of my men friends like me are using Pinterest but have no images pinned. Many men are like..."And how am I supposed to use this?" One friend yesterday said that for a man, going to Pinterest is like walking into a woman's bathroom. Not that it probably doesn't have many virtues and uses we haven't yet understood. That's why we're all there--it seems useful. But how?

It's OK for men and women to care about the same things. Some guys really like to cook. And that's OK.

Drew Hawkins, founder of the Pinterest "Board of Man"

"It's no surprise that women use Pinterest more than men," says Soraya Darabi, a New York-based digital brand strategist and co-founder of Foodspotting.com. "It has a very feminine script and interface, and the scheme is pink." Social media platforms are generally built for all, she says, but "how they're built — what the user interface looks like, and what the community feels like," plays a tremendous role on how — and who — ultimately uses them.

And the demographics on Pinterest, Darabi says, have thus far been self-perpetuating. "It's much like immigration ... where ethnic minorities often flock to certain cities because there's a nice community there to welcome them once they arrive.

"Online communities are not dissimilar," Darabi says. "Pinterest has a very warm and friendly user interface ... and once you land on that site for the first time, and you see how that community is predestined to operate, it's hard not to follow the flock."

It's just that warm and friendly aesthetic that has led some men to write Pinterest off as an exclusively female pursuit. Drew Hawkins was one of them — once. A social engagement manager at the marketing agency Engauge, Hawkins once complained to a female co-worker that the site was, well, "Stupid. It's all girl things," he told her.

The colleague pointed out that a Pinterest page is what you make it — a user's boards reflect only those items that a user chooses to pin.

To humor her, Hawkins launched a Pinterest board in October, essentially as a joke, "to pin over-the-top 'manly' stuff — lumberjacks, pictures of Chuck Norris and Sean Connery."

And "The Board of Man" was born. Its express purpose? "To add a few extra y chromosomes to Pinterest. Etsy promos and recipes be darned," according to the page. The Board of Man now has more than 185,000 followers, pinning images from films like The Big Lebowski alongside whisky bottles, baseball imagery, and more than a few photos of meat.

Hawkins may have jumped into Pinterest on a lark, but he's now a power user, spending two hours a day or more on the site. And while the board has been his pet project, Hawkins has come to appreciate other uses for the platform, from discovering new websites to planning for his dream home with his wife.

Many men have the misconception, Hawkins says, that Pinterest is populated only by things that women will like. "But it's OK for men and women to care about the same things," he says. "Some guys really like to cook. And that's OK."

And while Pinterest may continue to resonate primarily with women for now, Darabi notes that it doesn't have to stay that way. She predicts Pinterest will eventually "want to have a broader landscape of folks using the platform ... Should Pinterest really want to lasso in an older demo, a male audience, they may want to feature [uses] on their home page that are geared to those groups in particular."

Even those who've written off the site as overly feminine may soon find a Pinterest-like interface among their favorite sites, Darabi says. Pinterest's "ability to effectively scale and communicate a lot of content at once, and organize that content very, very efficiently," means "it's going to set the mode for how media companies structure their websites going forward."

And for those still unconvinced ... well, there's always Gentlemint.