Accessibility links
Nailing Down The Appeal Of Pinterest : All Tech Considered Pinterest, the hot new social media taste-sharing site, isn't necessarily about how many friends you have. It's about interacting with people you may not know and in the process developing a certain style. But can the site, which has gained millions of users in a short period, sustain its stellar growth? 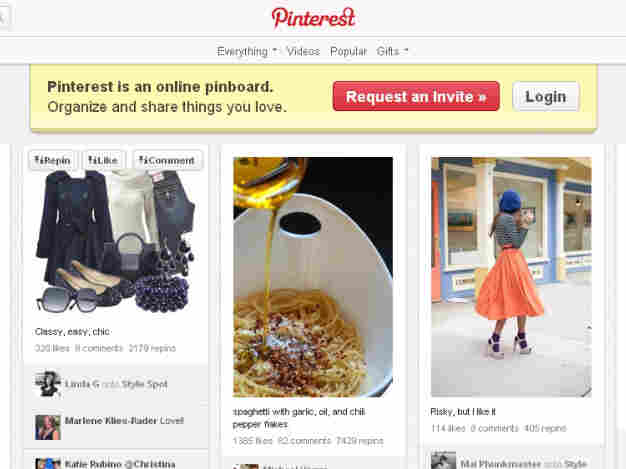 A visit to the Pinterest home page reveals images of what some say are stereotypically female interests, from women's fashions to recipes. Pinterest hide caption 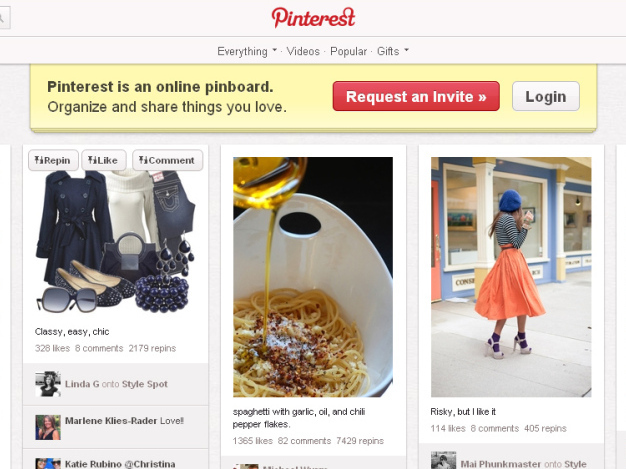 A visit to the Pinterest home page reveals images of what some say are stereotypically female interests, from women's fashions to recipes.

To the list of weird-sounding hybrid words of the digital age, like Googling and tweeting, we can now add "pinning." As in Pinterest. It's sort of an online scrapbook or bulletin board, and it's one of the fastest-growing websites in history.

Last month, more than 10 million unique visitors signed on to Pinterest. But some of them, like Billy Winburn, are still trying to get the hang of it. At an office in Alexandria, Va., Jennifer Folsom, who works a few desks away, is walking him through the process.

Winburn has found an architect on Pinterest whom he wants to follow. "Anything he likes, I'll probably like, but it could be new, different and exciting," he says.

They pin things they find around the Web to their online pinboards. Wooden watches, wedding dresses, leather iPad cases. Then anyone who follows them can see what they've pinned, and vice versa. It's a place where you can save and organize things you'd otherwise have to tear out of a magazine or file away in your email. This way, Folsom says, you never lose track of them.

"It's all in the cloud, sort of — online, organized wherever I am," she says.

Like Folsom, most Pinterest users are women. And many of them, including Folsom's girlfriends, can't stop talking about it:

"We had this hilarious moment in the Jonathan Adler Store where my friend said, 'I've seen that chair; I like it.' And the other one said, 'I think I saw it on your Pinterest board! Wait, it's not pinned there.' So she whips out her camera and she takes it, and she pins it, you know, as we're shopping."

On breaks during the workday, Folsom pins away, too, using both her laptop and her Pinterest mobile app.

"It might be people's recipes I like or style I admire, whose organizational skills astound me, like this one right here," she says. She points to an immaculately organized pantry on her laptop. She found it scrolling through Pinterest's endless array of home decor photos. Then she pinned it to her home design bulletin board.

On her "party time" board, she pins a photo of Arnold Palmer Jell-O shots poured into lemon slices. "That would be a great idea for a summer barbeque. Well, I don't know Jana Braswell, but I'm following her because she looks like she has a good time. "

That sort of online interaction with people you don't know is an emerging trend in social media.

"At first it was about how many friends do I have — how many can I get, how many groups can I join," says Susan Etlinger, an analyst from the Altimeter Group. She says that's changing. Now people want to connect with others who share similar styles and interests, she says.

"It doesn't mean that we're best friends or connected on Facebook, but it means these are people that I learn from and who also maybe learn from me," Etlinger said.

Etlinger says this shift is what's really fueling Pinterest's growth. Two years ago when the site was launched, Pinterest hardly made a peep. Now that Facebook included a Pinterest app on its new timeline, Pinterest has a potential audience of over 800 million people.

But, Etlinger says it's worth watching to see whether Pinterest holds on to its new users. "Once people really start to use it, you have to watch to see if they stick around," she says. "We need to wait another six months to see if the growth is sustainable."

One question is how Pinterest is making its money. The company declined an interview for this story. The website offers this much — entrepreneurs and venture capitalists have helped fund the company thus far, and advertisements may be in line for the future.

After all, it is one of the top five referrers of Web traffic to retailers.

Amy Rutherford runs a home furnishing boutique right above Jennifer Folsom's office in Alexandria. "I'm getting hits to my website from Pinterest, and that's increasing exponentially since [people have] begun adopting Pinterest."

Hits haven't translated into sales yet. Still, Rutherford thinks the exposure is good. Every day, she pins items from her store. And she recommends her customers use it, too.

"A lot of people don't know what their style is, and when they use Pinterest they can start pinning things that they see on blogs or on the site itself, and they go back and visit what they've pinned and they realize they have a style," Rutherford says.

Even if that style is a borrowed one.