Accessibility links
NBC Will Stream The London Olympics Live — But Only To TV Subscribers : All Tech Considered For the first time, American viewers of the Summer Olympics won't be limited by two words many sports fans loathe: "tape" and "delay." After years of saving the most popular events for prime time, NBC will also stream live video of the London Games, online and via mobile. 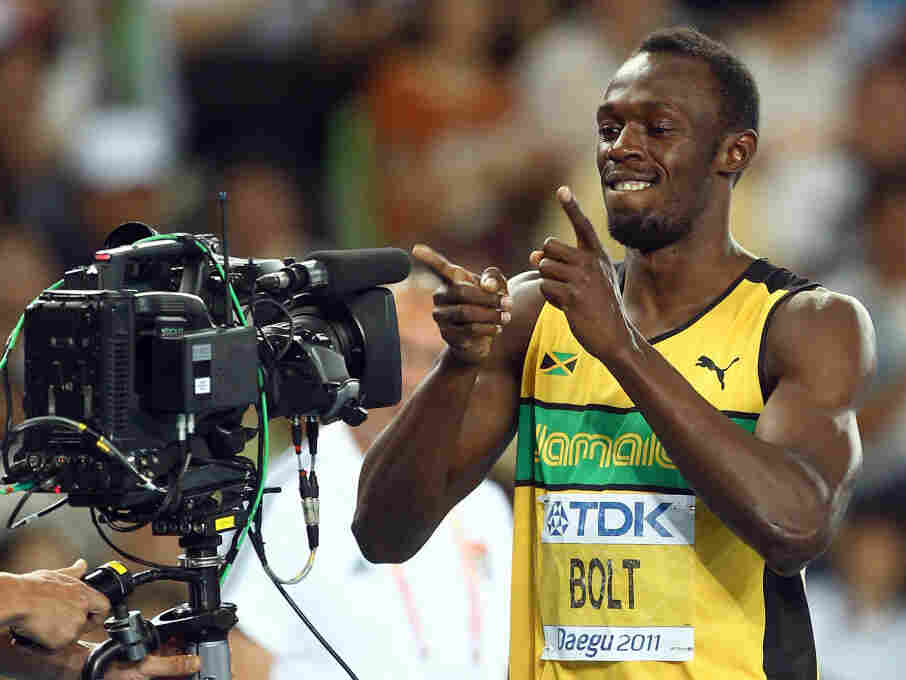 Many track fans watched online four years ago, as sprinter Usain Bolt set a world record at the Beijing Olympics. This year, NBC will stream video of all 302 events online. And Bolt, seen here showing his appreciation for video in 2010, will try to repeat his feat. Mark Dadswell/Getty Images hide caption 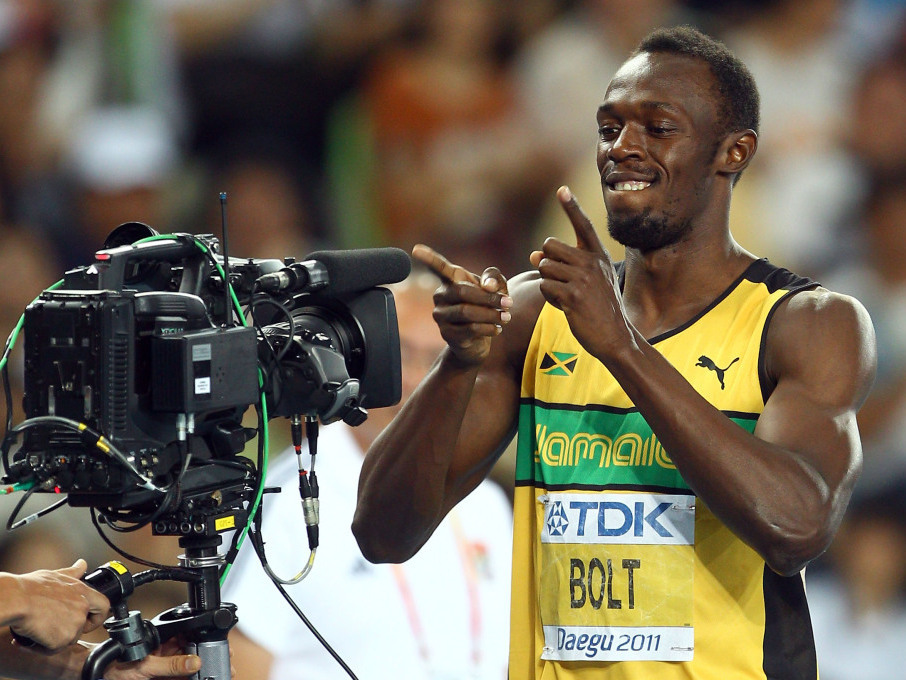 Many track fans watched online four years ago, as sprinter Usain Bolt set a world record at the Beijing Olympics. This year, NBC will stream video of all 302 events online. And Bolt, seen here showing his appreciation for video in 2010, will try to repeat his feat.

For decades, Olympics fans have loathed two words: "tape" and "delay." But this summer, things will be different: For the first time, NBC will stream live video of the London Games, online and via mobile.

If you think that decision is overdue, you're not alone. Sports Business Daily media reporter John Ourand says he is shocked it has taken this long for the network to put live video of all Olympic events online.

"People are watching video online," he says. "And people also are rejecting tape-delayed broadcasts — which is what NBC had done" in previous years.

For the 2012 London Games, NBC plans to stream video of all 302 Olympic events, allowing online viewers to choose what they want to watch. Fans will have options for watching broad highlights, or following one discipline's events.

The network will also release apps to allow live video and other features on tablets and smartphones. It's a far cry from the years the network spent cloistering the most popular events into a prime-time package that aired hours later.

But that doesn't mean NBC will be giving open access to just anyone who wants to watch the Olympics online. To get full access, you must be a cable or satellite subscriber. And you'll need a user ID and password from your TV provider to log in, according to a guide posted last week on NBC's video site.

That could be bad news for anyone who's gone "off the grid" by rejecting cable and satellite subscriber plans, who may be forced to find other options to watch favorite events live. And the network still plans to save most of its interviews and features for prime time.

Ourand says that for NBC, the lure of advertising revenue is only one reason to try to control access to its online Olympic content. He points to the network's widely available cable channels — USA, CNBC and MSNBC.

"One of the reasons that they're widely distributed is because they carry that Olympic programming," he says. "And cable operators didn't want to do without that programming."

As Ourand tells Inskeep, "TV is still driving the bus here. There's a cliche in the media business: 'Digital dimes for TV dollars.' And that's still in effect here."

Even so, Ourand says that NBC's online coverage, which will be hosted at the network's newly relaunched Olympics site, signals a new approach at the network — and in the sports media.

"What ESPN and other networks have found is that, when you broadcast things live online, it doesn't erode the broadcast at all," he says. "In fact, it draws a lot of people to want to see it on their hi-def TVs in their living rooms."

Ourand says that NBC received a vivid demonstration of how hard it is to keep sports fans from watching an event live online during the 2008 Beijing Olympics, when sprinter Usain Bolt turned in an electrifying world-record performance in the 100-meter dash.

"People watched it online, via foreign websites, via pirated websites — and NBC didn't get any of that," says Ourand, who recalls watching the race on the BBC's website.

Despite that burst of online interest during the event, the network's programming didn't suffer. Ourand says that "the rating for Usain Bolt for NBC on prime time was still very good" — something he attributes to buzz about Bolt's record, as well as fans' desire to watch the race on large high-definition televisions, even if they'd seen it earlier on a computer.

The Bolt race seems to have been a big moment for NBC, which had previously been unwilling to put many high-profile events online as they happened.

Another thing that'll be different about this year's Olympics is the timing of the men's 100-meter sprint final. If Bolt repeats his gold-medal performance of four years ago, he would do so on Aug. 5, a Sunday. That means that here in the U.S., the race would start around 4:50 p.m. EDT. 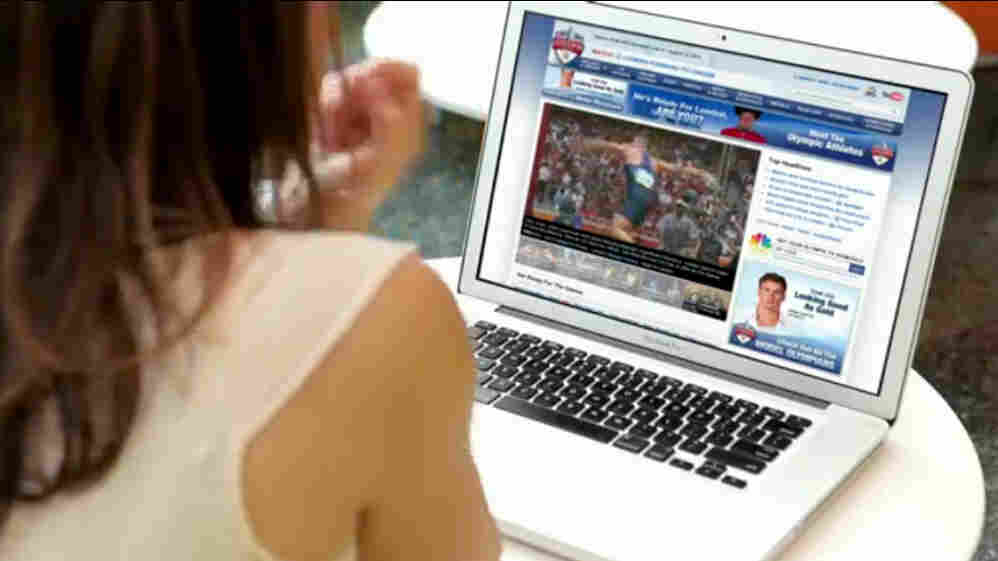 Live video of every event at this summer's Olympics will be streamed online — but NBC's free service will require a password from a cable or satellite provider. In this snapshot from an NBC video, a woman watches video on her laptop. NPR hide caption 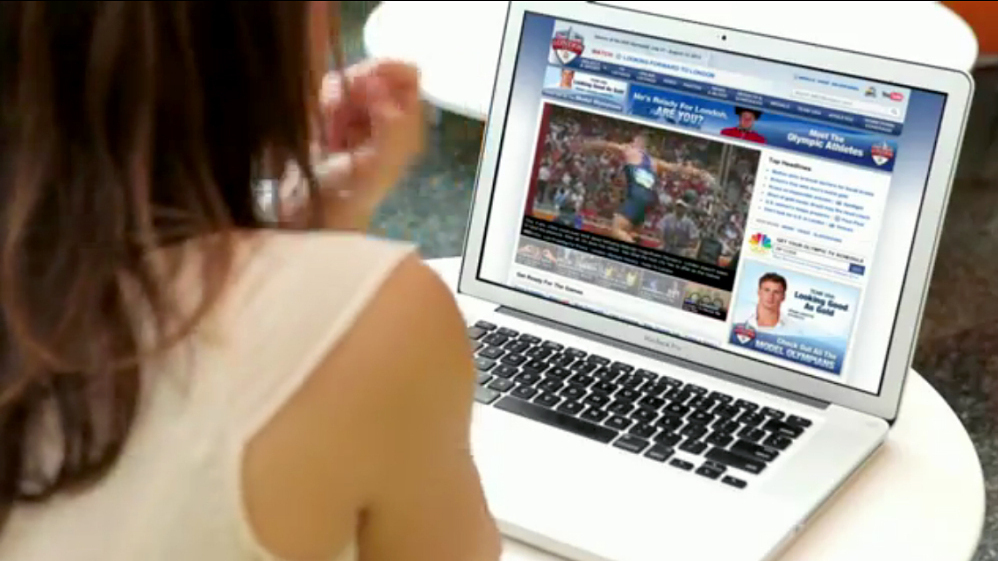 Live video of every event at this summer's Olympics will be streamed online — but NBC's free service will require a password from a cable or satellite provider. In this snapshot from an NBC video, a woman watches video on her laptop.