Accessibility links
Vintage Spy Plane Gives High-Tech Drone A Run For Its Money : All Tech Considered In the early days of the Cold War, the U-2 spy plane helped the U.S. collect intelligence on the Soviet Union. More than a half-century later, not only is the U-2 still in commission, but it's also successfully competing against the more expensive, remotely piloted Global Hawk. 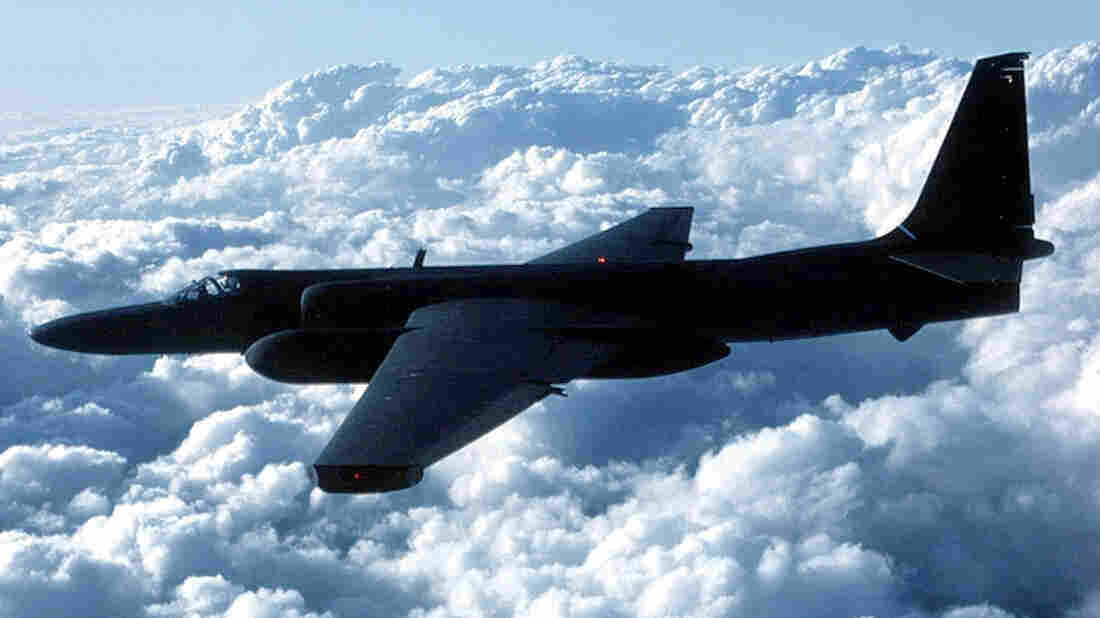 The Air Force's U-2 spy plane first took flight in August 1955 and has been in commission ever since. USAF/Getty Images hide caption 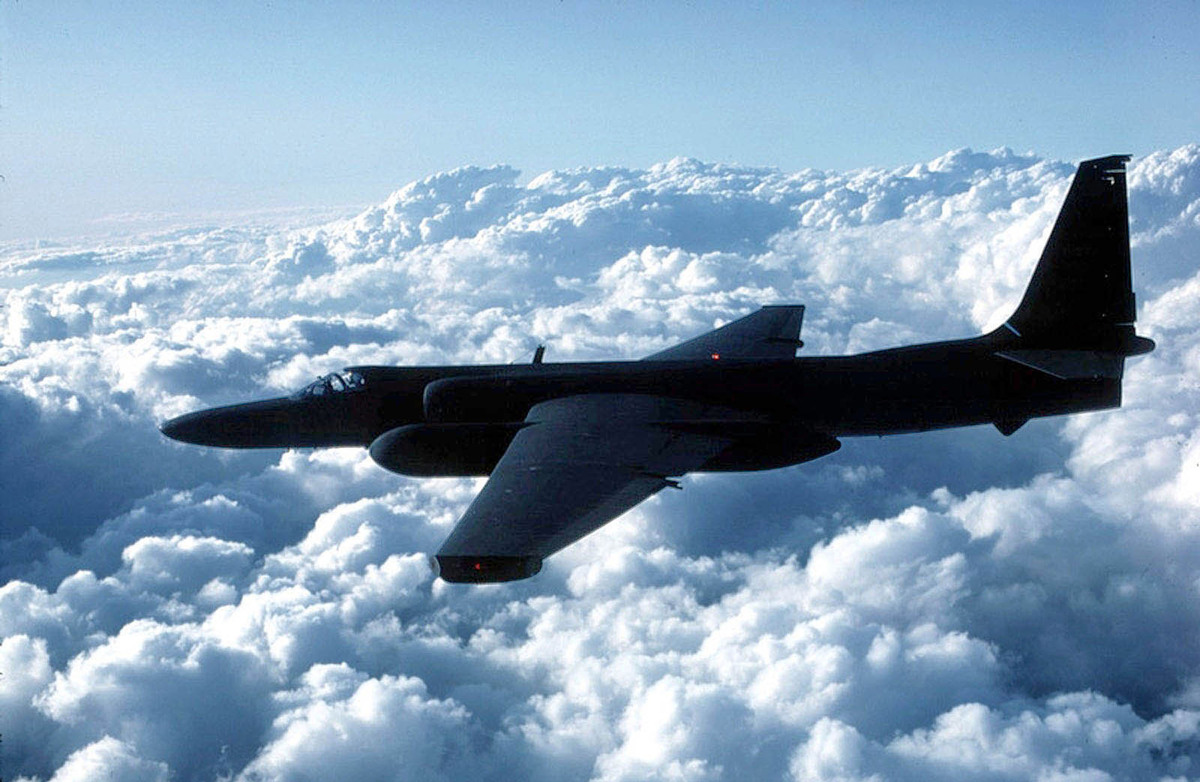 The Air Force's U-2 spy plane first took flight in August 1955 and has been in commission ever since.

In the early days of the Cold War, the U-2 spy plane helped the U.S. collect intelligence on Soviet military operations. It was a relatively unknown aircraft until May 1, 1960, when U-2 pilot Francis Gary Powers crashed one in the Soviet Union. (Powers spent nearly two years in Soviet prisons before he was released.)

Now, the Air Force says it wants to scale back funding for an expensive hi-tech surveillance drone in favor of the more affordable, manned U-2 aircraft.

At 57 years old, the U-2 still looks like an experimental plane, but it has been adapted to stay relevant. Doug Lantry, a historian with the National Museum of the U.S. Air Force, says the plane was given longer wings and a much more powerful, more reliable engine. 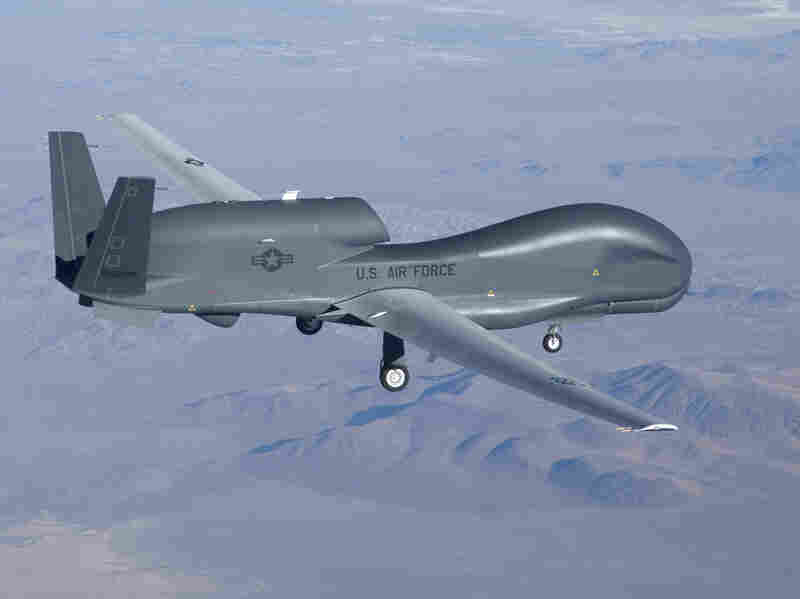 The Air Force's Global Hawk spy drone carries a much heftier price tag than the U-2. Bobbi Zapka/AP hide caption 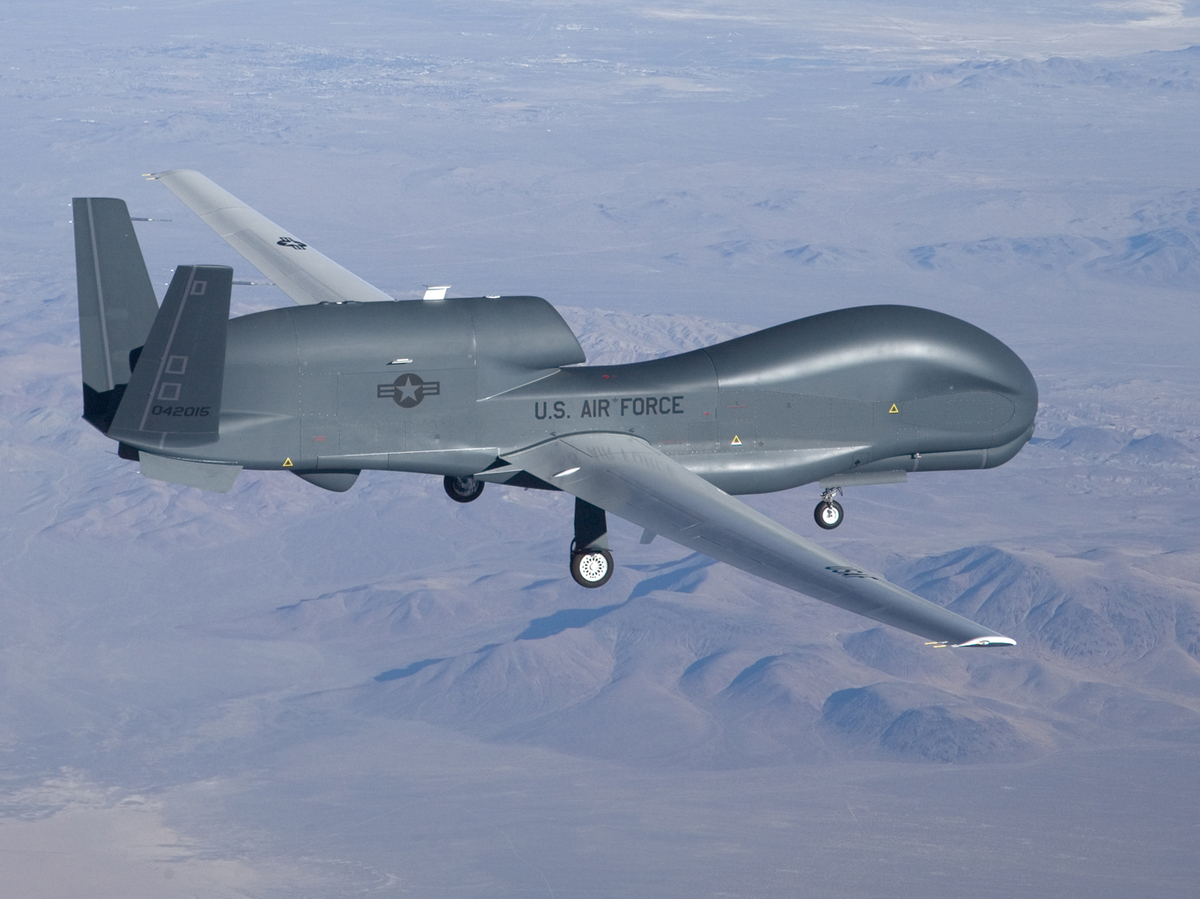 The Air Force's Global Hawk spy drone carries a much heftier price tag than the U-2.

"And, of course, there [are] all the new sensor pods," which help gather intelligence, he says. "But I think you could say, basically, it's still the same machine — it's just better."

The great irony is that at Northern California's Beale Air Force Base, the U-2 lives right next door to its high-tech competitor — the sleek, remotely piloted Global Hawk. The U-2 can do almost the same job the Global Hawk does for much less money.

Flying At The Edge Of Space

According to Lantry, the U-2 was designed because the U.S. wanted to take pictures of its chief adversary, the Soviet Union, without getting caught.

"The only way to do that without getting shot down was to have a very, very high-altitude, high-performance aircraft that could fly higher than any fighters or missiles that the Soviets had, and take pictures and bring them back," he says.

The U-2 flew at more than 70,000 feet, an altitude that was thought to be beyond the reach of fighter planes and missiles. (Powers' accident proved that it wasn't.) To fly that high, Lantry says, designers had to combine two technologies.

"Really what it amounts to is a sailplane with a jet engine in it," he says.

The U-2's glider-like wings help it soar in thin air while its efficient jet engine helps it take off like a rocket and stay aloft for long surveillance flights. The combination of power and wing design allows the U-2 to operate at the edge of space. Pilots get a pretty cool view, but it's a very uncomfortable perch.

'This Thing Loves To Fly' 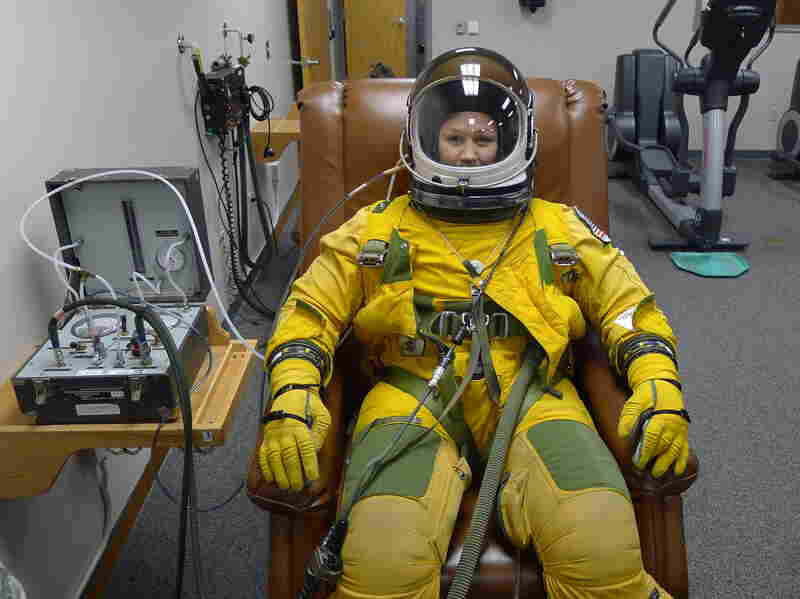 Because U-2s fly at such high altitudes, pilots must wear full spacesuits in case of a leak in the pressurized cockpit. Larry Abramson/NPR hide caption 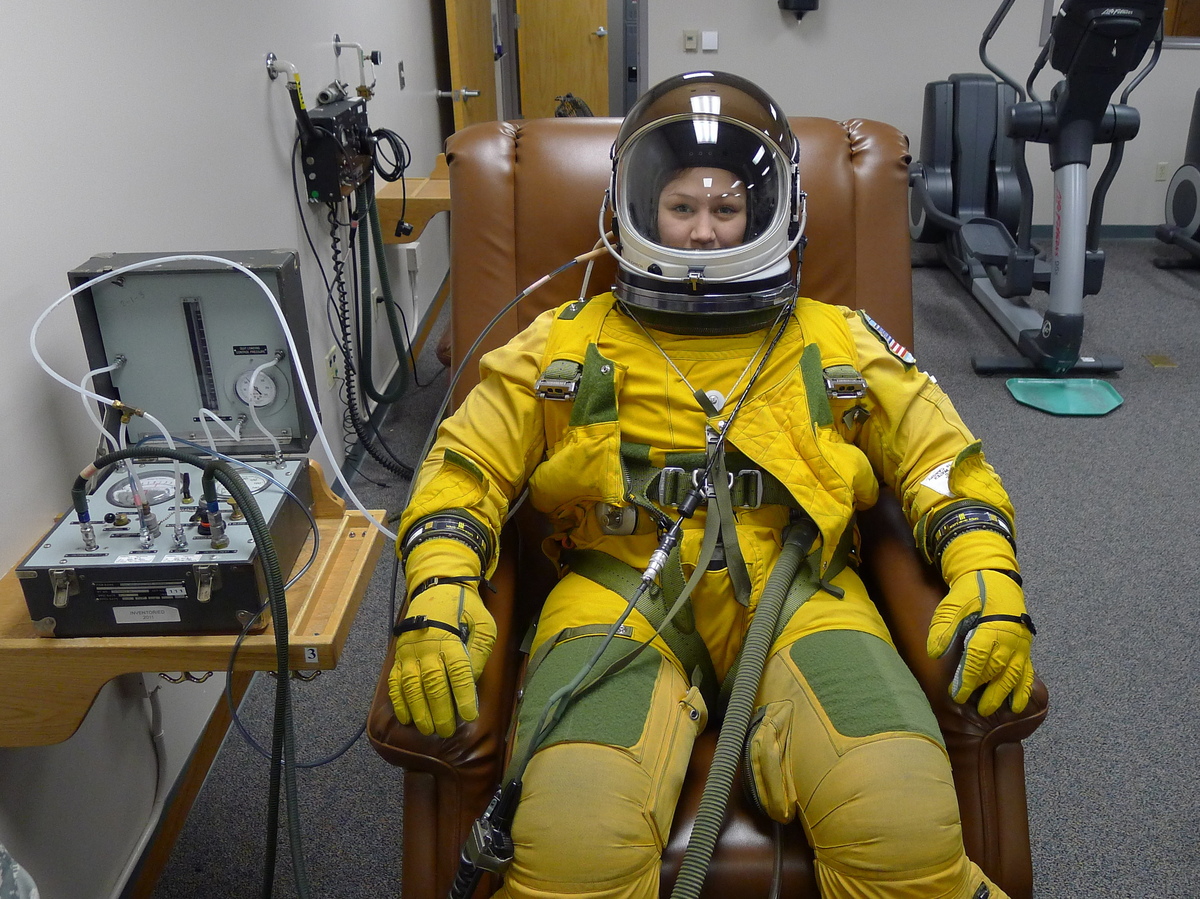 Because U-2s fly at such high altitudes, pilots must wear full spacesuits in case of a leak in the pressurized cockpit.

Back at Beale Air Force Base, U-2 pilots prepare for flights by breathing pure oxygen for an hour before they take off. The idea is to keep pilots from getting the bends from the extreme pressure change that occurs during the U-2's rapid climb to more than 13 miles in the air.

Crews also help pilots into the full spacesuits they'll be flying in, sometimes for as long as nine hours. The U-2 has a pressurized cockpit, but without the suit, a leak could mean certain death — the pressure change would be so abrupt, the pilot's blood would boil. Once the suit is on, the pilot can fly the plane, but the suits are so restrictive that they can't do much else, like scratch any itches.

And the plane's idiosyncrasies don't stop there. If you want to get an idea of just how quirky it is, you need to watch it land. According to Col. Steve Rodriguez, the U-2's long wings want to stay airborne.

"This thing loves to fly," he says, grinning. And that means it doesn't want to land.

Spy Exchange Would Be A Cold War Flashback

Captured Drone May Have Limited Benefit For Iran

Rodriguez runs Beale's U-2 training program. He says bringing the plane down requires help from a chase car. So as a pilot comes in for a landing, Rodriguez pulls onto the tarmac in a little Pontiac G8. He hauls down the runway at 90 miles an hour right behind the jet as the radio in the chase car squawks away.

Because the U-2 doesn't let pilots see the ground very well, they need help touching down with the plane's skinny landing gear. Where most planes have a nice, wide tricycle to land on, the U-2 basically has a set of baby carriage wheels lined up under the razor-like fuselage. Another challenge is keeping those long, floppy wings from hitting the ground. If they do, the plane's original titanium protectors will keep the wings from getting too damaged — but scraping the runway is less than ideal.

The pilot rides the plane like a bronco, forcing it to land. It touches down then hops right back into the air. This pilot is auditioning for a spot on the U-2 team, and Rodriguez is watching his every mistake.

A Half-Century Old And Still Relevant

When asked which plane he prefers, the U-2 or the Global Hawk, Rodriguez is diplomatic. "We will take what it is that we are given and operate it to the best of our ability," he says.

But while reinvestment in the U-2 may sound like the story of David and Goliath, with old technology beating out new technology, it's not quite that simple. For one thing, NATO just announced that it would be purchasing a version of the Global Hawk, and a U.S. House committee has voted to restore the Global Hawk funding that the Air Force wants to cut.

The real story is that the U-2, a design more than a half-century old, can still give the Global Hawk a run for its money, whether it's hanging from the ceiling of the Smithsonian or flying a lofty mission.