Accessibility links
IPv6: A New Internet Expands The Web By Trillions Of Addresses : All Tech Considered A new Internet protocol system launched Wednesday, adding trillions upon trillions of new Internet addresses that can now connect almost everything you own to the Web. Here's what you need to know about all that extra digital real estate.

IPv6: A New Internet Expands The Web By Trillions Of Addresses

IPv6: A New Internet Expands The Web By Trillions Of Addresses 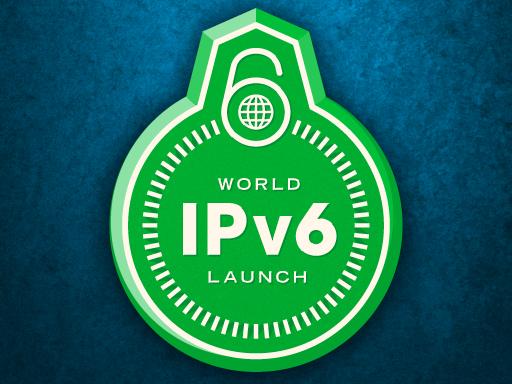 You may not have noticed when you woke up today, but the Internet universe expanded overnight by the trillions.

Every Internet-connected device has an IP address, a series of numbers that allows your computer or smartphone to connect to the Web. Since the early days of the Internet, most devices have logged online with addresses from the IPv4 system.

But back in February 2011, you may have read headlines declaring an "I-Pocalyspe" and "The End Of The Internet As We Know It." That's when news broke that the International Corporation for Assigned Names and Numbers (ICANN) gave out the last of its IPv4 addresses. Apparently, 4.3 billion IP addresses are not enough for the world's increasing appetite for multiple Web devices.

Still, as CNET.com's Stephen Shankland explained to NPR's Melissa Block last year, most Internet users have nothing to fret about for now.

"Basically, what happened is it stopped raining and snowing in the mountains. But we're downstream - down the river, and we still have plenty of water right now," Shankland said. "At some point in the next year or two, the dry spell is going to come downstream and we're going to have a drought down where the regular folks are."

That's where IPv6 comes in as the long-awaited knight in shining armor, armed with Internet addresses numbering to 340 undecillion (that's 340 with 36 zeroes after it).

In the end, IPv6 is a long-term investment to ensure the Internet continues to be "open to innovation," says Leslie Daigle, chief Internet technology officer at the Internet Society.

Here's what you can look forward to in this brave new world of IPv6:

- You will probably keep your IPv4 address for the near future.

IPv6 is still in a "Field of Dreams" stage: it's built and launched, but the Internet Society is still waiting for the bulk of the world's Internet users to come. Big Internet names like Google, Facebook, YouTube, and Yahoo have already come on board to connect, but the full transition to IPv6, unlike its launch, will not be overnight. Daigle says IPv4 addresses will still be in use as long as they are useful. But she says, "Once most of the world has moved to IPv6, there will be no point to have them, so effectively they will be retired." IPv4's golden years, though, are still a ways off. But you can check if you currently have IPv6 here.

- The speed of your Internet connection will probably stay the same.

In fact, there may be delays in your connection as more users transfer to IPv6. Future IPv6 users connecting to servers still on IPv4 will need to use hardware that translates the data. As Shankland explained, "When you're trying to get data from some server on the other side of the Internet, the data might have to get translated from IPv4 to IPv6 and then back to IPv4. That has to happen every time a little packet of information goes from one place to another."

- One day, your refrigerator, keys, and maybe even toilet will have an IP address.

With trillions upon trillions of new IP addresses available, Vint Cerf, co-founder of the Internet and currently Google's "Chief Internet Evangelist," predicts an "Internet of Things" where users can control appliances and other everyday objects with just a click on an app.