Accessibility links
Too Hot? No Cooler Time To Honor The Steve Jobs Of A.C. : All Tech Considered Triple-digit heat and summer storms that left millions without power help mark the upcoming anniversary of engineer Willis Carrier's 1902 breakthrough. So how did ordinary people endure the heat before A.C. became a necessity?

Too Hot? No Cooler Time To Honor The Steve Jobs Of A.C.

Too Hot? No Cooler Time To Honor The Steve Jobs Of A.C.

With triple-digit heat across the country and places from Denver (105 degrees) to Farmville, Va. (106), setting or tying all-time record highs, let's set down our lemonades and iced teas long enough to show our appreciation for Willis H. Carrier. 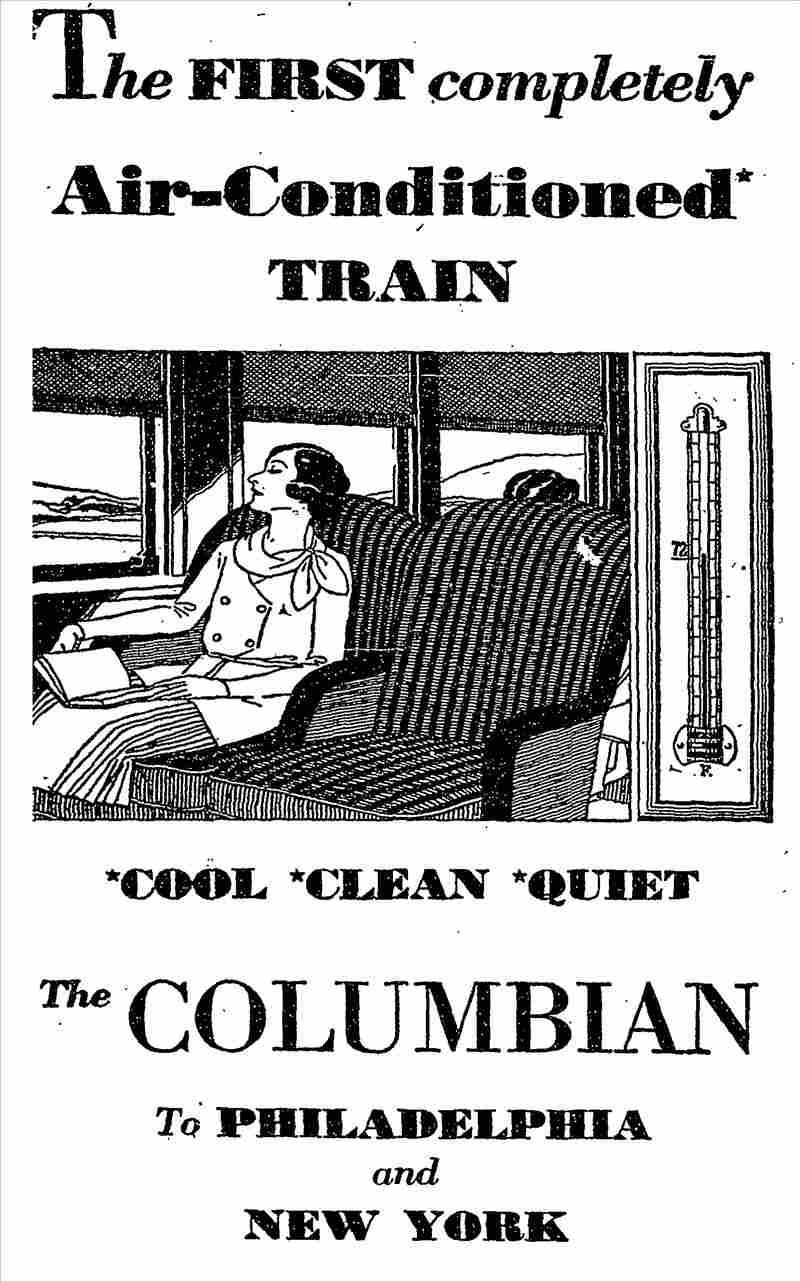 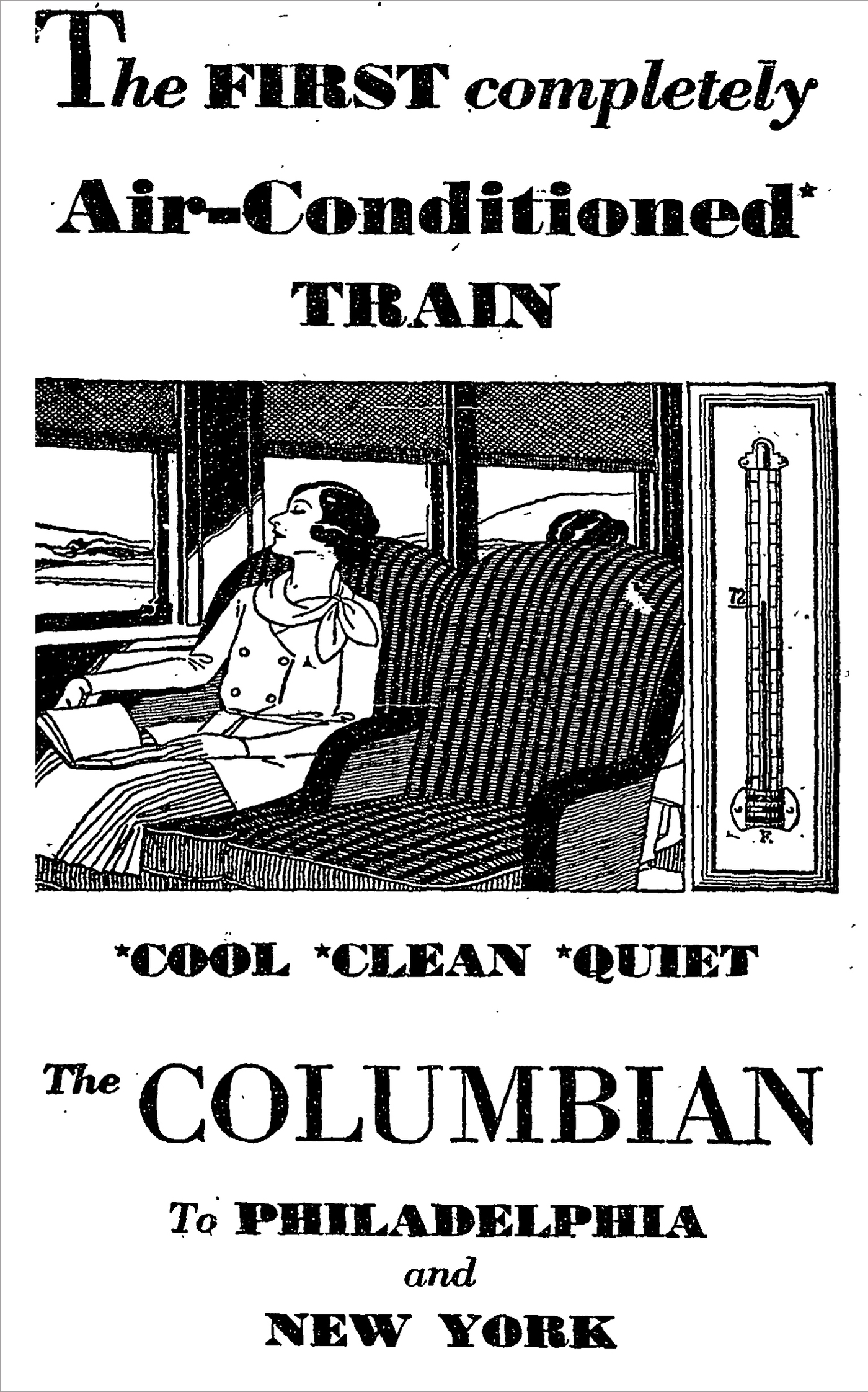 A series of 1931 newspaper ads touted the latest comfort for rail passengers on the B&O's Columbian line.

Carrier was the wunderkind of modern air conditioning, a Steve Jobs or Mark Zuckerberg of cold air. So it seems fitting to mark the upcoming 110th anniversary of his first breakthrough with a heat wave and bands of early summer storms that left millions without electricity and air conditioning.

Despite iPod-strong sales, air conditioning remained a luxury for many years. Newspapers in the '20s and '30s were still filled with headlines about thousands of deaths and "prostrations" linked to summer heat. It would be decades before most newly built single-family homes in the United States had A.C. — hard to believe today, when Census data show that about 90 percent of newly built homes are air-conditioned.

So how did ordinary people endure the heat and keep their cool in those days before air conditioning went from extravagance to necessity?

Talking about the weather is almost as old as weather itself. Before air conditioning, there was no better setting for those conversations than the shaded shelter of a friendly front porch. That is, until the telephone came along.

One indication of this rapid change of venue emerged during a June 1925 heat wave, when the New York Telephone Co. noted that phone use had spiked as high as the mercury. In Coney Island, the company saw traffic double. As a Wall Street Journal report noted at the time, the telephone was hot:

"Seldom in the history of the company have there been such sudden jumps in the volume of traffic. The whole balance of the service suddenly shifted. ... Operators had to be sent from New York to help out in the outlying districts."

Keeping cool in the buttoned-up pre-A.C. era inevitably required unbuttoning, even a little. The Washington Post, covering the same 1925 heat wave that had phones ringing up and down the East Coast, noted some changing fashion rules during that scorcher. During one 99-degree day, local D.C. police were urged to loosen up — but not too much:

"Although police are in summer uniform, and allowed to go about with coats opened, providing the regulation shirt and collar is worn, they are not allowed to doff their coats, it was learned."

On a similarly hot day in New York the following year, higher degrees of disrobing broke out in some municipal courts. As the New York Times reported in a July story:

"Some of the law courts mercifully waved rules and countenanced shirt sleeves yesterday. In the Traffic Court here and in the County Court in Brooklyn, attendants had to take a hand when some of the sufferers removed their shirts."

Alien as it might seem to those of us A.C. users who are used to seeking shelter from the heat in the great indoors, the open air once provided some overnight relief from sleepless swelter for masses of people, even in Big City USA.

Accounts of steamy summers from the '20s and '30s are filled with descriptions of roofs and even fire escapes transformed into crowded public bedrooms. "Many of the city's parks and nearby beaches were hosts to thousands who flocked there to sleep during the night," said a Times story from June 1934. "More than 8,000, many of them men and women clad in pajamas and carrying blankets to spread on the sand, came to Coney Island beach shortly after nightfall."

Taking It All Off

The primary difference between extreme cold and extreme heat is that you can always layer on more clothing, but there is only so much you can take off — especially in more modest times and places.

As it happened, the import of nudist ideas to the United States in the 1920s and '30s corresponded with the rise of A.C. But American culture and law did not exactly embrace the movement, even when the weather turned brutal.

That was the challenge for Fred C. Ring, a dance instructor in Kalamazoo, Mich., back in 1933. Ring established the "Sunshine Sports League," a family-friendly nudist colony near Allegan, Mich., that provided a secluded place for family and friends to freely frolic during that especially sticky summer.

Alas, police raided Ring's private encampment, and Ring was fined $300 and sentenced to 60 days in jail for indecent exposure. He appealed to Michigan's Supreme Court, which had little sympathy for his, um, brief. "It is clearly shown that the appellant designedly made an open exposure of his person and that of others in a manner that is offensive to the people of the State of Michigan," the justices wrote in their 1934 ruling. "Such exposure is both open and indecent."
If ever a stronger case for A.C. had been argued, we cannot find it in the annals of the law, or the newspaper pages of decades long past.

In this century, public concern is more focused on global warming than indoor cooling — and even heated arguments about the link between the two. Stan Cox, author of Losing Our Cool: Uncomfortable Truths About Our Air-Conditioned World (and Finding New Ways to Get Through the Summer), made that point in a Washington Post essay following a 2010 heat wave:

"The energy required to air-condition American homes and retail spaces has doubled since the early 1990s. Turning buildings into refrigerators burns fossil fuels, which emits greenhouse gases, which raises global temperatures, which creates a need for — you guessed it — more air-conditioning."

Those words of caution, along with the sultry scenes above, provide a balanced way to reflect on how Willis Carrier's innovations reshaped our relationship with weather. Perhaps on July 17, the day in 1902 when Carrier first fired up the air-conditioning system he created for the Sackett & Wilhelms printing plant in Brooklyn, we should turn down or even turn off our A.C.s, no matter how hot it is. That way we can appreciate both how things used to be, and how A.C. transformed our world.