Accessibility links
Report From The Drone Convention: Unmanned Vehicles Find New Uses : All Tech Considered Drone makers and robotics manufacturers gathered in Las Vegas are optimistic that they will overcome civil liberties concerns about these gadgets, and make the leap from wartime to peacetime markets. Products include "throwable" robots that police can use for remote surveillance, and small aircraft to watch volcanic eruptions. 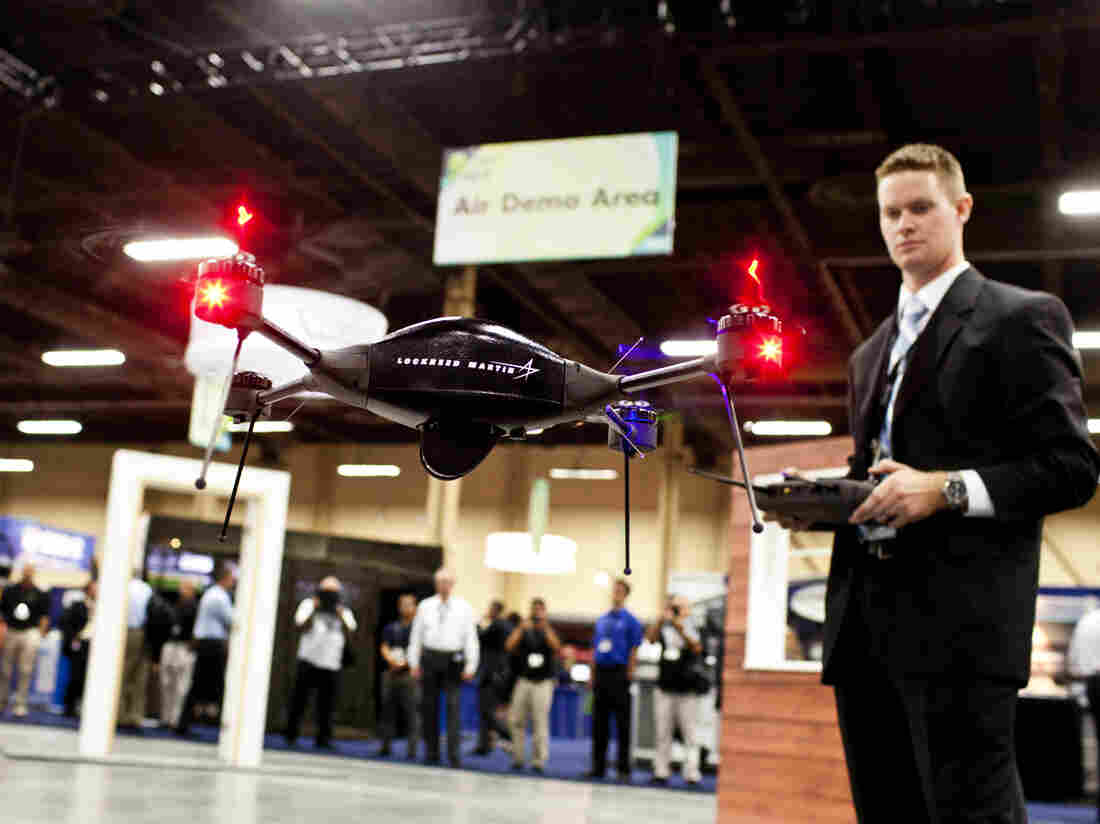 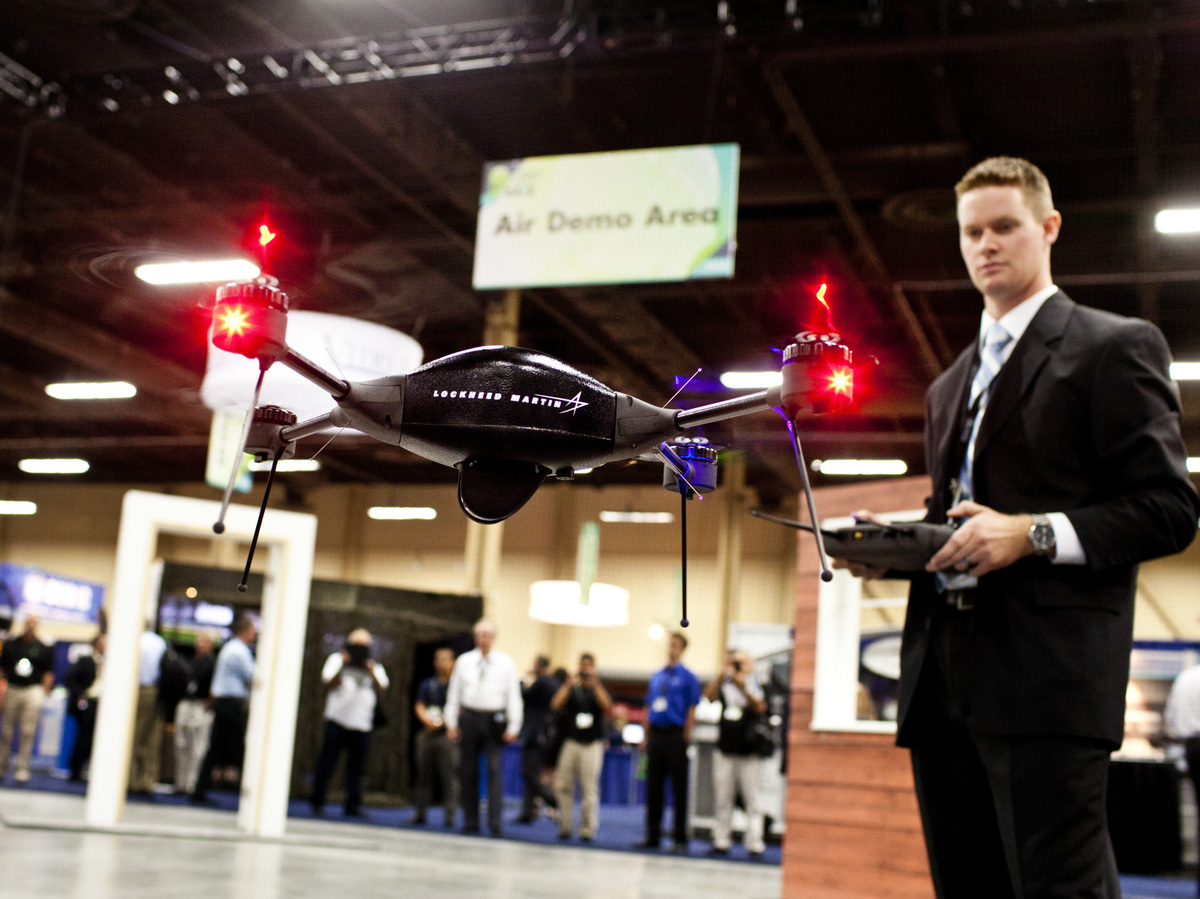 Drone makers and robotics manufacturers are looking for — and finding — new uses for devices that were once limited to the worlds of science and the military.

After a decade of explosive growth, thanks largely to the post-Sept. 11 demand from the military for unmanned vehicles, the industry is eagerly awaiting the opening of a new front: the domestic drone market.

Manufacturers gathered for this year's Association for Unmanned Vehicle Systems International convention in Las Vegas are optimistic that they will overcome civil liberties concerns about these gadgets, and make the leap from wartime to peacetime markets.

The timing of this year's meeting was handy. NASA's rover Curiosity landed on Mars just as the conference opened. (One exhibitor, Crane Aerospace and Electronics, contributed technology for Curiosity's power supply.) The rover's initial success helped demonstrate that unmanned technology has lots of uses well beyond the Predator strikes many people associate with drones. 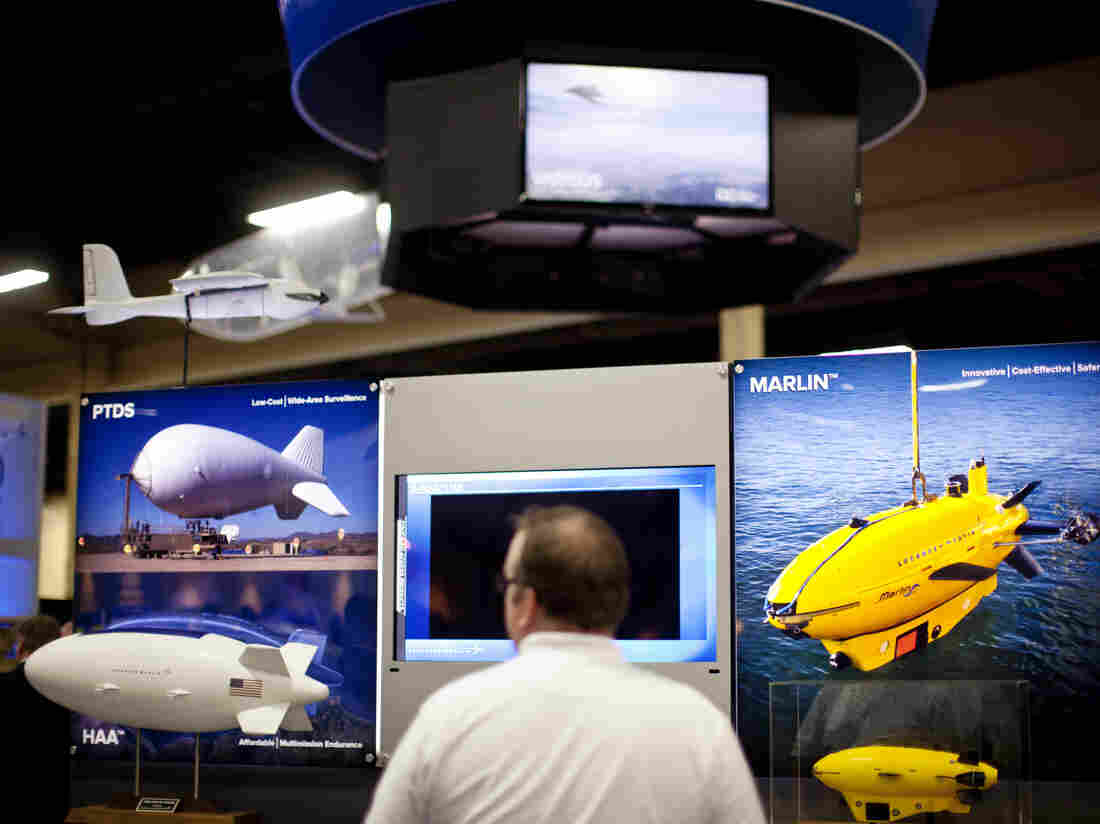 Manufacturers at the conference showed a wide range of unmanned vehicles used in the air, on land and in the sea. Kainaz Amaria/NPR hide caption 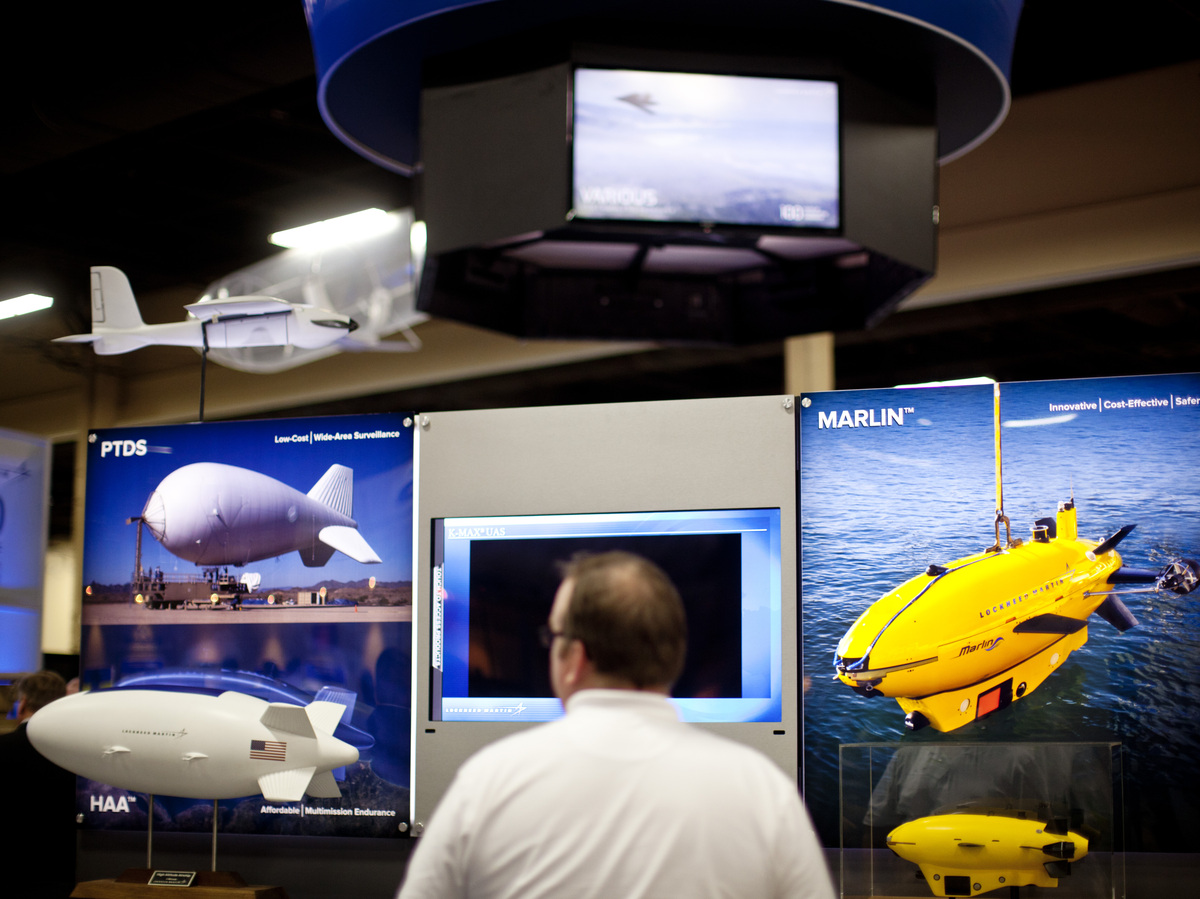 Manufacturers at the conference showed a wide range of unmanned vehicles used in the air, on land and in the sea.

3-Mile Range, Fits In A Suitcase

The biggest stars of the show are the raft of smaller aerial vehicles that could soon be coming to a search-and-rescue team near you.

Procerus Technologies, recently acquired by Lockheed Martin, demonstrated its Quad VTOL (vertical takeoff and landing) drone. The stealth-black vehicle has at least a 3-mile range, and includes a sophisticated camera on a gimbal. That means the camera can remain focused on an object while the drone flies by, making it much easier to use. The device also folds up and fits into a suitcase, so it can be deployed quickly.

Ease of use is key if manufacturers are going to start selling these things here at home. Local police and other first responders may not be willing to spend hours training staff on how to operate a drone the way the military has.

AeroVironment's Raven is made to survive abuse by falling into pieces. That's how this small, unmanned plane absorbs the energy of a rough landing. Crews simply put the pieces together again for the next use. That's made this item a hit with military — 3,000 Ravens have been deployed for use overseas. AeroVironment hopes first responders and other domestic customers will show the same interest.

The Challenge Of Airspace Safety

These and other devices are waiting for the regulatory process to open the domestic market, which has been largely closed to unmanned vehicle use. But, Federal Aviation Administration Acting Administrator Michael Huerta told the group, that will change soon.

The FAA is designing safety protocols so unmanned aerial vehicles, or UAVs, can be fully integrated into the national airspace system by 2015. Many manufacturers grumbled that the FAA is moving too slowly, and the current ban on commercial use is unfair. But they also acknowledged that an accident — such as a collision with an airliner — would be disastrous for their industry.

There was also a lot of discontent over the civil liberties objections to the use of UAVs by law enforcement, which is just beginning to take off. Many complained that calls for limits on the use of this technology could kill jobs, in an industry where the U.S. is in the lead.

Eyes In The Sky And Civil Liberties

In a panel discussion, law enforcement officials and attorneys said legal precedent provides protections against unreasonable searches, which should ease public concerns. But, Gregory McNeal of the Pepperdine University School of Law told the audience, ignoring civil liberties concerns could be a costly mistake. He said the UAV industry needs to explain the benefits of its products, and cannot sit back and complain that citizens' concerns are unjustified.

Much of the industry is still focused on devices that can't leave the ground. The counterpart to the growing number of small flying vehicles are hand-sized helpers, like the Throwbot made by ReconRobotics. In Afghanistan, soldiers throw these 1.2-pound robots onto a roof or through a window. The barbell-shaped Throwbot rumbles around and provides a video feed of the scene, so troops — or police — can assess the situation from a safe distance. Other manufacturers, such as Roomba-maker iRobot, are moving into the throwable robot segment, in the hope that they will prove useful in hostage situations here at home.

In addition to law enforcement, those who watch over large tracts of land are eager to use UAVs to save valuable time. Mike Hutt of the U.S. Geological Survey said his agency has already used UAVs to survey the sandhill crane population in Colorado. He's hoping to get FAA approval soon for other uses on federal lands, from monitoring forest health to watching volcanic eruptions in Hawaii. Hutt predicts UAV use will surpass the use of manned aircraft for his field by the end of this decade.