Accessibility links
Twitter Lets Customers Skip Recordings, And Make Choices : All Tech Considered Once relegated to one-time promos and marketing campaigns, Twitter is now a tool businesses use to provide customer service. And for some customers, Twitter can be a deciding factor in what companies they do business with. 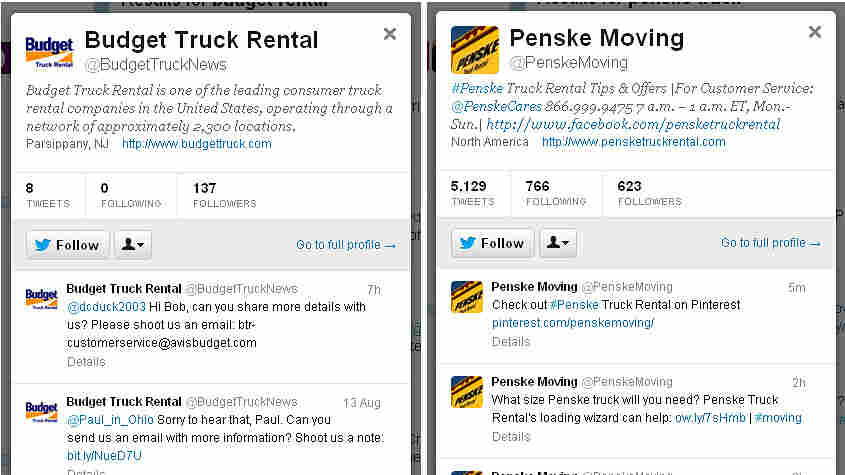 For customer Laura Hargrove, the choice between moving-truck companies Budget and Penske came down to how they use Twitter. NPR hide caption 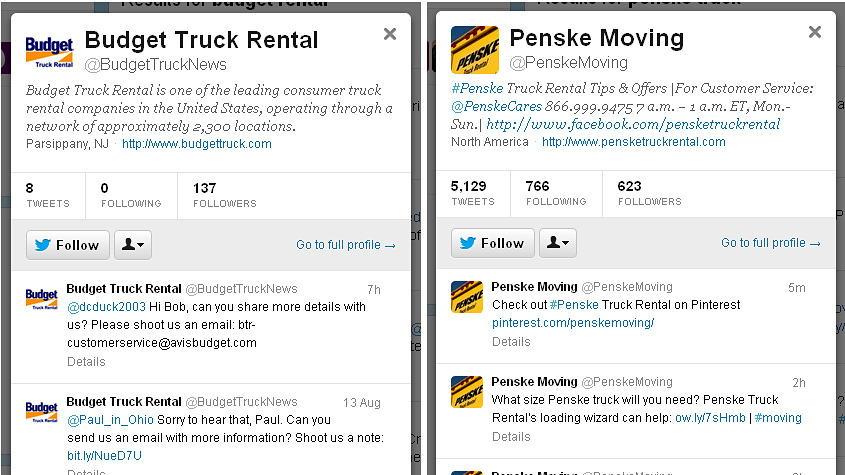 For customer Laura Hargrove, the choice between moving-truck companies Budget and Penske came down to how they use Twitter.

Once used mostly for one-time promos and marketing, Twitter is now something businesses are relying on to provide customer service. For instance, Southwest Airlines tweets to alert folks about delays. And Best Buy responds to questions and complaints via Twitter. And they're not alone.

Let's say you're thinking of ordering a pair of shoes online and you want to know the store's exchange policy. You could pick up the phone — but then you'll hear the old recording: "To ensure quality service, your call may be monitored or recorded."

"I use it to kind of compliment companies," she says, and to "ask questions about products and services."

Hargrove turned to Twitter recently when she and her husband were researching rental trucks for a move from Texas to California. They were comparing two companies — Penske and Budget — and wanted to know if they had CD players in their trucks.

"Penske was the one that continually outshone Budget" on Twitter, Hargrove says, "by answering questions and getting back to us. And the speed of their replies was just amazing."

Penske says it started its Twitter customer service program about a year ago.

"We want to be where our customers are, where our prospects are," says Randy Ryerson, the company's director of communications. "And we see it every day: 'I just sold my house; I can't wait to pick up the Penske truck,' you know — and you see people standing there proudly, next to the Penske truck."

The other company Hargrove was looking at, Budget, didn't respond to the tweets in time. Budget's vice president of communications says it isn't a brand that's relevant to Twitter users' everyday lives.

"Because those Twitter accounts are set up to be service-oriented communication channels," he says, "it doesn't make sense for the average person, even if they're a customer of that company, to follow them on Twitter."

Laura Hargrove isn't following Penske, for example. But she is a customer, because the company responded to her.

"It's so easy, it's such an easy thing to do, to answer a question posed by a customer," she says. "It means a lot. And I don't know why they wouldn't."

But Twitter isn't easy. Penske took an entire year to observe how its customers were using the service before diving in, then extensively trained call-center employees on the platform, which is now monitored from 7 a.m. to 1 a.m. every day.

Smaller companies probably don't have resources like that. And, Jordy Leiser says, some big companies aren't sure whether it'll pay off for them.

"There's still been some skepticism as to what the true value of these social platforms can be," he says.

A dollar-figure return on social media investment can be tough to calculate. But recent studies have shown that the world's 100 largest companies get nearly 6 million combined mentions on Twitter every month.

Plenty of players — from Penske to L.L. Bean and Zappos — have decided that's a place they can do customer service business.