Accessibility links
When A Kickstarter Campaign Fails, Does Anyone Get The Money Back? : All Tech Considered On Kickstarter, the largest crowd-funding site, a handful of entrepreneurs have raised millions of dollars more than they expected. But if they fail to deliver their promised product, questions arise over whether the supporters are donating money or making a purchase. 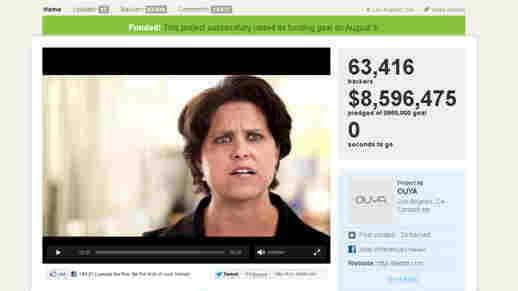 In seeking financial backers for her Ouya game console, Julie Uhrman was looking for about $1 million. The business received far more than that amount. Kickstarter hide caption

Crowd funding began as a way to support the arts on the Internet. Artists could go online to pitch a new album, for example, in the hope that thousands would give small amounts. But now it's expanded to entrepreneurs, and the rules aren't quite as clear.

On Kickstarter, the largest crowd-funding site, a handful of entrepreneurs have raised millions of dollars more than they'd expected, by selling the concept of products they have yet to make. But financial backers have no clear way of getting a refund if the young businesses fail to deliver.

Making A Successful Pitch On Kickstarter

Julie Uhrman loves playing video games the old-fashioned way — in front of the TV. While sales of consoles like the Nintendo Wii are down, Uhrman believes TV games are not some retro thing of the past. She cites her 4-year-old as proof. One day a controller was lying on the table, she says.

"And then to see my daughter pick up the controller and say, 'Show me how to do this,' " she says, "it just meant that this is something that's going to be around for a really long time."

Uhrman admits that she got a little excited when she saw that her daughter was glued to the TV screen — although, she adds, "I'm sure my daughter's preschool won't like that."

Kickstarter liked it, a lot.

In July, Uhrman released her online video promo for a game console she calls Ouya. The first letter stands for open source. Unlike the Nintendo Wii, it's open for developers in the Android operating system to make games.

"It's open for hackers that want to tweak the box and make it their own," Uhrman says in Ouya's Kickstarter video.

Uhrman raises an eyebrow and flashes a mischievous smile about this big undertaking.

"Effectively, we're trying to disrupt an established industry," she says in the video. "It takes a lot of guts and courage. If I wasn't a female, I'd say, 'big balls.' "

Uhrman asked for $950,000 — much more than the average project. A month later, her Kickstarter campaign closed with pledges worth $8.6 million. About 57,000 backers expect an Ouya console by next March.

I visit Uhrman in San Francisco, where she's meeting with a dozen designers to hash out Ouya's boomerang-shaped controller.

During a break from the meetings, I ask her, "Would you have to give money back to your backers if you weren't able to deliver?"

She takes a deep breath and pauses before answering.

"Technically, from the Kickstarter perspective, I actually don't know the answer to that," she says. "But from a doing-the-right-thing perspective, we will treat our backers the best possible way."

So I call Kickstarter co-founder Yancey Strickler, and ask: What if Uhrman isn't able to deliver the consoles? Would Kickstarter get involved?

"You know, that would be new ground," he says. "I don't know. I mean, no, I don't think that we would. But certainly, the kind of thing you're talking about is not a bridge that has been crossed yet. Someday it will. And you know, I think if something did go awry, it would be — it wouldn't be my favorite day."

When Kickstarter launched three years back, it was primarily fans giving money to little-known artists. Today, the most lucrative projects are goods that customers pre-order from would-be merchants.

"By creating a system where it's just a series of open and direct exchanges between people with ideas and projects, and people interested in supporting them," Strickler says, "you have everyone on the same page, and everyone understanding what's going on."

Almost everyone, that is.

The Question Of Refunds

One entrepreneur who raised $10 million to build a "smartwatch" that streams email and text messages just missed his first delivery deadline. One of his backers demanded a refund, to no avail.

Another entrepreneur, David Barnett, released a Kickstarter campaign video where he bounces and steps to raise money for PopSockets, a snazzy iPhone case with a headphone cord wrap.

"Did you see that?" he asks in the video. "My cord didn't even get tangled. And with all that dancing."

But a year later, there are still no PopSockets. And the money has reportedly gone in fees to prospective manufacturers and lawyers.

Barnett — whose day job is being a philosophy professor at the University of Colorado, Boulder — decided to pay back 40 of his 500 backers.

"I think it sets a bad precedent," he says. "Once I did that, I could tell that it started creating the impression in some of my backers that they had purchased an item. And I think as Kickstarter grows, there's more and more of an impression that it's just a big store for people to go get deals."

That's the conflict at the heart of Kickstarter: While the company's policy says creators have to give refunds on failed projects, the website doesn't have a mechanism to do it. Barnett used PayPal.com to process $1,300 in refunds.

Ethan Mollick, a professor at the Wharton School of Business, says that while crowdfunding is a more democratic way to raise money than going to elite venture capitalists, it's also a brave new world.

"Enthusiasm is ahead of [the] tools," he says. "So, Kickstarter is a very minimal system in some ways. It's not really built to police itself."

As entrepreneurs come online, Kickstarter and hundreds of similar platforms will have to sort out if each transaction is a donation or a purchase.

In response to this story, Kickstarter published a blog post clarifying its position on accountability, refunds and guarantees.