Accessibility links
Tesla's Big Gamble: Can The Electric Car Go Mainstream? : All Tech Considered Tesla Motors is an automotive rarity — a startup, and a car company that comes out of Silicon Valley, not Detroit or Japan or Germany. Tesla hopes the technology it uses to make electric cars will upend the industry. 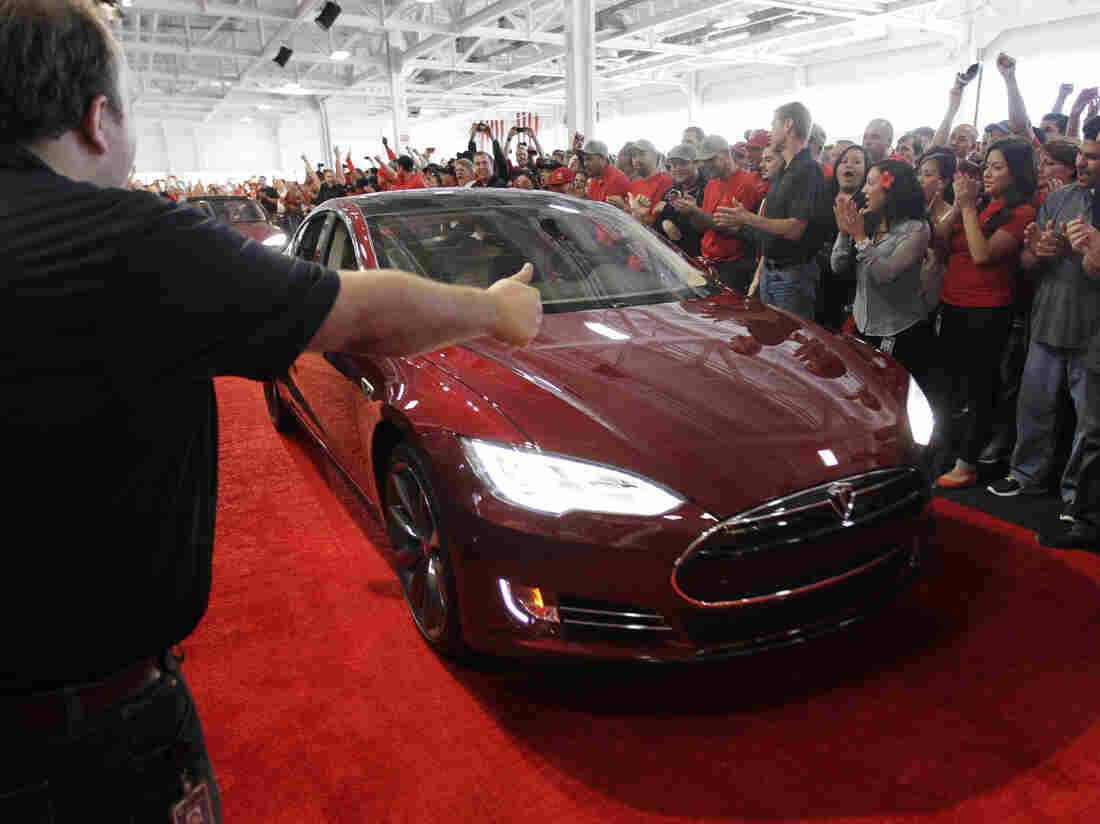 Tesla workers cheer on one of the first Tesla Model S cars sold, during a rally at the Tesla factory in Fremont, Calif., in June. The company is now unveiling a new network of refueling stations for the vehicles. Paul Sakuma/AP hide caption 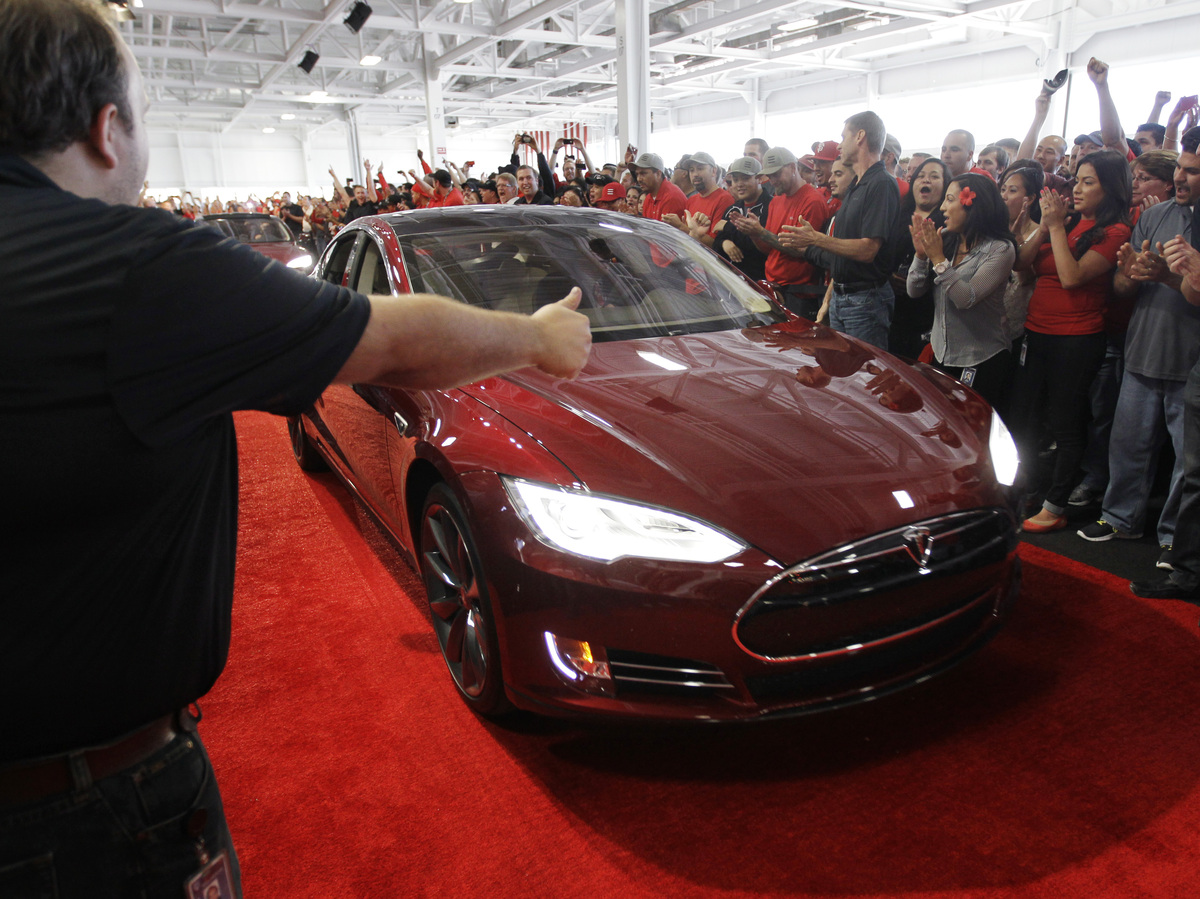 Tesla workers cheer on one of the first Tesla Model S cars sold, during a rally at the Tesla factory in Fremont, Calif., in June. The company is now unveiling a new network of refueling stations for the vehicles.

Starting a new car company from scratch isn't tried often in the United States. The last time one was truly successful was about 100 years ago. And Tesla Motors, a startup from Silicon Valley, faces some unusual hurdles.

Still, despite the challenges Tesla faces, the electric car company and its CEO, Elon Musk, have gotten further than most automotive entrepreneurs.

The company is unveiling a new network of superchargers — refueling stations that can top off the batteries in its cars in under an hour.

So far, Tesla has built a small number of vehicles for the high-end market. Now, it wants to go mainstream.

The first step in starting a successful car company is building a car people want. Tesla has checked that box. Its new car, the Model S, is a thing of beauty.

It's a four-door Sedan; it has a hatchback; and it can seat five adults, plus two little kids in jump seats in the "way back."

It has a sleek front hood — a bonnet if you're British — but underneath, there is no engine; instead, it's a bonus trunk that they call a "frunk."

The reason it can have a frunk is that the engines that power this car are relatively tiny — and that means there is a lot more space inside.

On the outside, it looks a bit like a Jaguar — sleek but curvy. It inspires unseemly lust in middle-aged men.

"The car will absolutely blow people's minds. I think that's the handling more than anything else," says Dayo Gomih at Tesla.

The Model S with an 85-kilowatt-hours battery pack can go from Los Angeles to San Diego and back on a single charge — that's more than 250 miles. And Gomih says this car has the lowest center of gravity of any made — most of the weight in the car is in its batteries, and they're spread out under the floor; so it handles a lot more like a Porsche than a Ford Taurus

Actually, Tesla is designing a car for the minivan/SUV crowd. And it's going to have the same kind of power and a similar price tag as the Model S.

Musk says eventually the company will make another car that many more of us could afford.

"It's really been my goal from the beginning for Tesla to produce a mass-market car," Musk says.

"At Tesla, we did, I think, receive some unfair criticism because we had the Tesla Roadster, and people would say, 'Well, why are you making this expensive sports car?' As though we somehow felt that there was a shortage of sports cars for rich people or something," Musk says. "But, in fact , even though I would try to take pains to say, look, our goal from the beginning has been to drive forward the electric car revolution, and we needed time to refine the technology — get to version two, get to version three. And really, with version three — the $30,000 car — that's where it becomes mass market."

To do that, Tesla has to become a real car company; the price of the batteries needs to plummet; and consumer tastes have to change.

Tesla has 10,000 orders for the Model S already. The company moved out of a little garage in Menlo Park, Calif. — where it made the roadster — into a giant factory in Fremont.

Getting a new factory up and running is hard. Michelle Krebs, an auto analyst at Edmunds.com, told us how General Motors retooled a Detroit plant to make the Chevy Volt.

"It was a nightmare," she says. "There were robots dumping sealant on the floor because they weren't aiming in the right place, and these little automated guided vehicles going around the plant [were] taking parts but didn't know exactly where they were going. All of this is very complicated, difficult stuff."

Getting manufacturing right is just the beginning. When millions of Americans think of electric cars, they still think of golf carts.

But that might be changing. Almost anyone who has seen a Tesla or driven one becomes a fan. In addition, a couple of years ago, Musk hired a guy named George Blankenship.

Blankeship's last gig was to build Apple's retail stores for Steve Jobs. When you walk into a Tesla store, you feel that.

A new store opened in Portland, Ore., a few weeks ago. It's little. It's in an upscale mall. There are touch-screen displays on the walls and just one car inside, but it was packed with people — looking not buying.

Mark Goodwin and his wife, Debbie, were walking through the store touching the car and peering inside the frunk. "Well, it's out of my price range, to be honest with you," says Mark Goodwin. "But I love the technology, and I love the direction it's going."

Blankenship doesn't hesitate to predict when Tesla will convert people like Mark Goodwin into real customers.

"I believe that everyone who comes in this weekend is going to buy a car from us in the next 10 years," Blankenship says.

But to finance Tesla's future, the Model S needs to be a hit: A whole lot of plastic surgeons and venture capitalists are going to have to buy it before Tesla will have the cash it needs to make the next car — a truly affordable Tesla. Just turning a profit won't be enough.

But in many ways, Tesla has already turned the car industry on its head. Ten years ago, none of the big carmakers were building electric; now, most do.

Tesla made electric cars cool, and while that might not guarantee success, it probably has already changed history.

But the question remains: Does Tesla have a future?