Accessibility links
National Security Experts Go Rogue For 'Drone Smackdown' : All Tech Considered Law and national security experts got together last weekend for a dogfight they call the Drone Smackdown. The contest, though tongue in cheek, still raised lots of questions about the proliferation of drones, the rules of combat and federal efforts to regulate them. 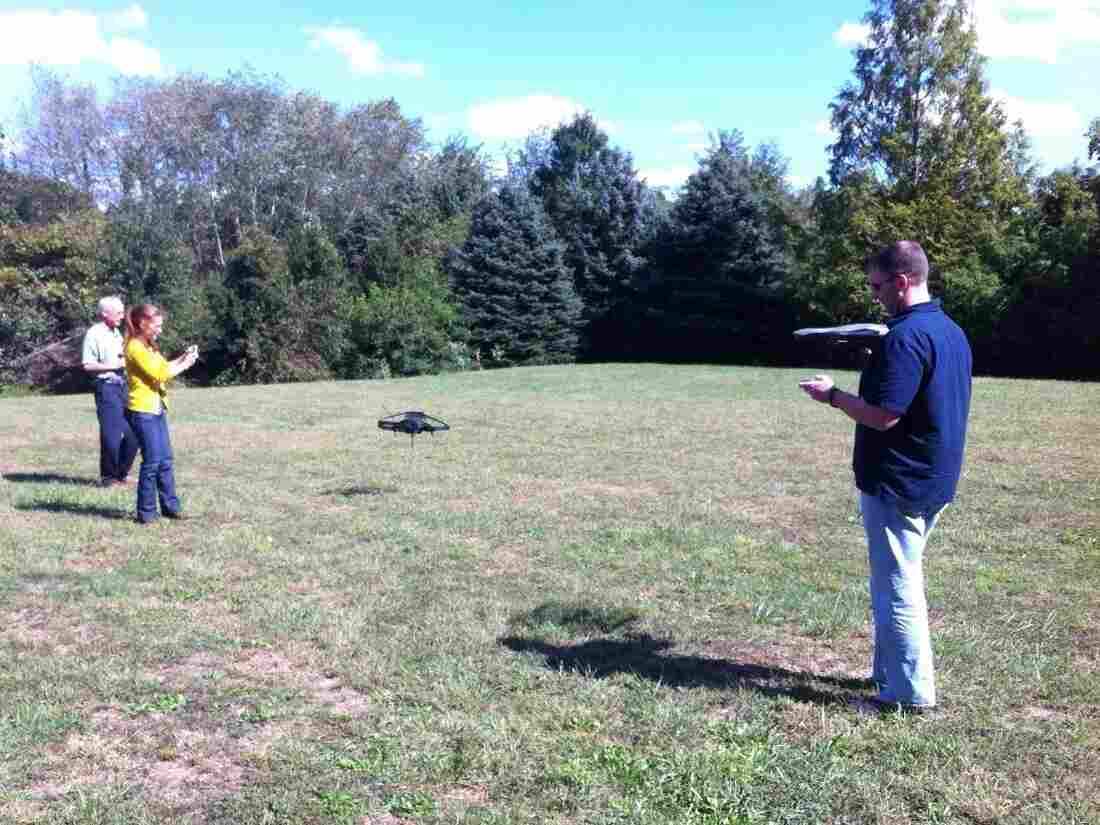 Alice Beauheim, her father and Bill Love fly their homemade machines at the Drone Smackdown in Manassas, Va., on Sunday. Objections by the Federal Aviation Administration forced organizers to hold the tongue-in-cheek contest outside of Washington, D.C. John Procter hide caption 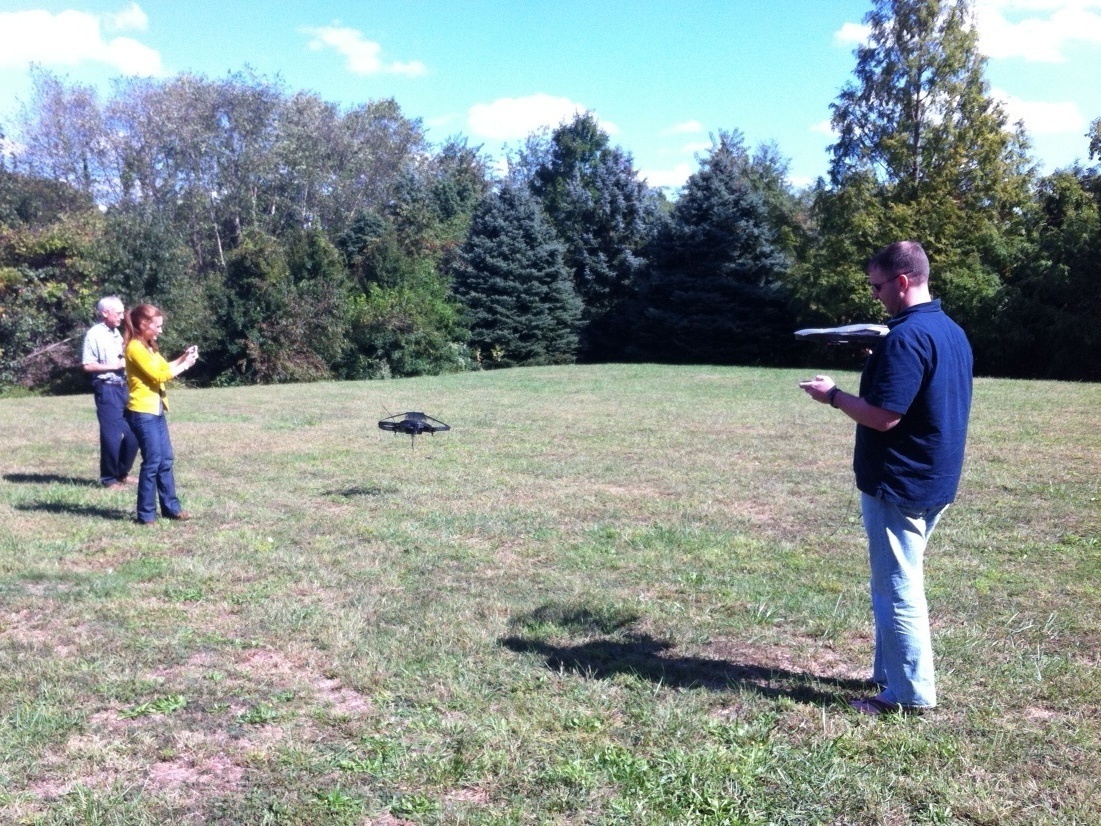 Alice Beauheim, her father and Bill Love fly their homemade machines at the Drone Smackdown in Manassas, Va., on Sunday. Objections by the Federal Aviation Administration forced organizers to hold the tongue-in-cheek contest outside of Washington, D.C.

It started as trash talk between two contributors to a national security blog. They decided to host a drone smackdown to see if one guy's machine could take down another.

Unarmed drones, of course. The kind you can put together with a toy-store model and $200 in modifications. But the game turned out to have some serious undertones.

First, a word about the location. For a moment last week, the whole drone smackdown was up in the air.

A park in Washington had been ruled out after the Federal Aviation Administration warned that machines not much bigger than your kid's toy helicopter didn't belong in D.C.'s restricted airspace.

"Rather to my surprise, I got a phone call from the FAA informing me that they considered it improper and illegal to run drones in Washington," says Ben Wittes, an architect of the drone competition. That includes even little rinky-dink, unarmed drones like these Parrot AR models.

So the race was on to find a new location, only days before the event. They settled on a grassy area in Manassas, Va., bordered by a pond, leafy trees and a patch of poison ivy.

Shane Harris, a national security writer at Washingtonian magazine and the judge of this contest, reminded the players about the rules of engagement. "Air attacks on ground targets, including your pilots and your judge, are prohibited," Harris said.

After a few minutes of fumbling, Round 1 began. "All right, let the battle begin," Harris declared.

The first contestant was a drone with interlocking black loops to protect the rotors, shaped like the burners on your stove top. The machine, nicknamed Stux2bu, belonged to Wittes, co-founder of Lawfare, the blog that sponsored the contest.

The loops on the opposing drone were draped with blue and white yarn resembling the tentacles of a jellyfish. But it couldn't get any lift, to the chagrin of Homeland Security consultant Paul Rosenzweig. Rosenzweig tried to rally his team, including his grandson Ryan.

"I'm trying," Ryan replied. "It's disconnected, and it's not letting me do anything."

"You disconnected it?" the grandfather asked.

Realization began to dawn. "Ah," Rosenzweig said. "So Ben is messing with it."

Messing with it all right, by jamming the wireless signal, so Rosenzweig couldn't direct his drone.

His machine dropped into the grass. And it didn't get up. Not much of a dogfight when one of the drones can't get off the ground. The remainder of the contest proved no contest at all because of the paralyzing cyberattack by Wittes' so-called accomplices, aged 11 and 14.

They pointed out the name of their drone derived from the word Stuxnet, the infamous real-world computer virus discovered in June 2010 that targeted Iran's nuclear enrichment efforts.

Cyberattacks are claiming increasing attention on the world stage. Just last week, the State Department's top lawyer declared they could be considered acts of war.

But on the field near Manassas, as the judge announced a victor, Wittes told a gently protesting Rosenzweig that he had played by the rules, as written.

"All right, as the judge I officially declare that Ben Wittes is the champion," Harris said to applause.

"A little bit of a cheater but ..." Rosenzweig interjected.

"Hey man, in any negotiation over the laws of war, it pays to be the draftsman," Wittes replied.

To a lot of people, drones are no laughing matter. U.S. machines equipped with deadly missiles have killed al-Qaida leaders in Pakistan and Yemen. They've also killed some innocent civilians.

Founders of the smackdown say they respect those arguments. But Wittes says he thought it was important for the event "just to highlight the degree to which very powerful, very inexpensive robotic technologies are becoming available to anybody who wants them."

And to highlight the importance of cybersecurity in an increasingly networked world.