Accessibility links
Calif. Greenlights Self-Driving Cars, But Legal Kinks Linger : All Tech Considered Supporters of the technology say it will save a million lives a year and prevent a global carmageddon. But among the questions still to be worked out: If a self-driving car runs a red light and gets caught, who gets the ticket?

Google's self-driving robotic cars have been on the roads in California for two years, but they have been operating in a legal limbo. These cars were not explicitly forbidden, but laws governing self-driving vehicles didn't exist.

Last week, that changed when California Gov. Jerry Brown signed a bill that cleared a path for these robots to become street legal. It's a big boost for the technology, but there are obstacles to overcome before self-driving cars are cruising down Santa Monica Boulevard.

When I went for a ride in Google's self-driving, robotic car last winter, there were still a few things these robots couldn't do — like reverse.

"The cars will do reverse at some point, it's just not what we are focused on right now," Anthony Levandowski says.

Levandowski and Chris Urmson lead the self-driving project at Google. So if these cars are kind of like robotic teenagers who are learning to drive, Urmson and Levandowski are like their parents. 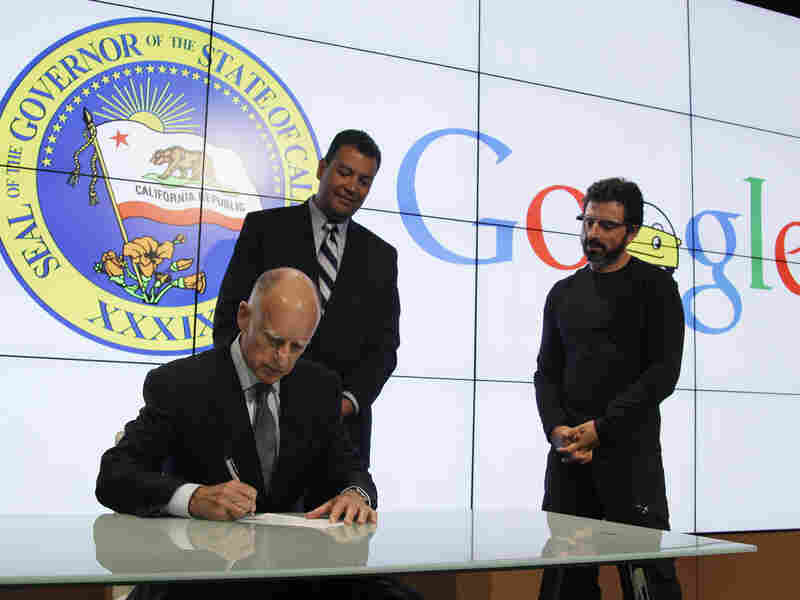 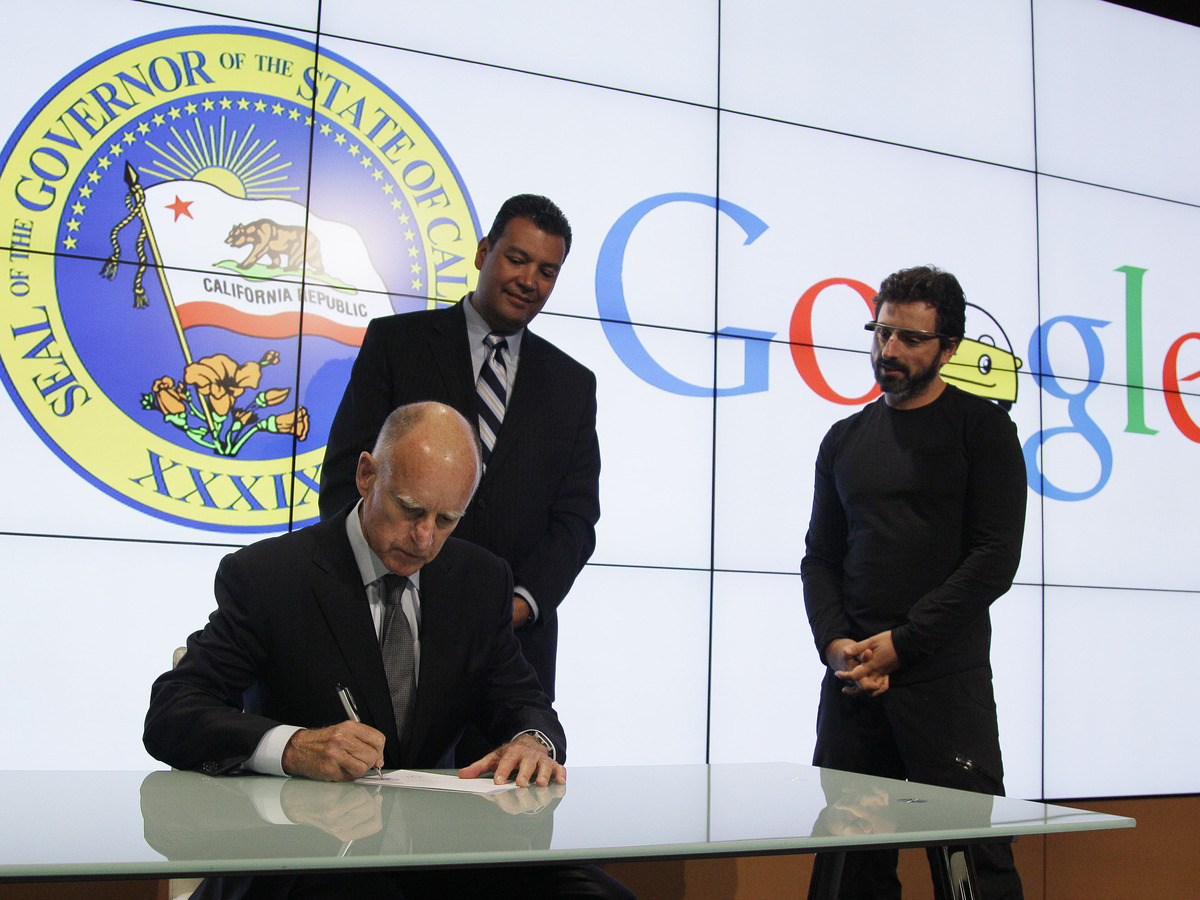 While these robots are responsible, cautious drivers, Urmson says, there are some important things the engineers are still figuring out.

"We do a good job of detecting pedestrians at the side of the road, but we don't yet have built-in the kind of intuition for what a pedestrian might do," Urmson says.

Temporary road signs are also a challenge, as is snow.

There are already all sorts of things, however, that robotic cars could do that human drivers can only dream of.

"In the U.S., there are about 33,000 people killed every year in traffic accidents," Urmson says. "Worldwide it's something like 1.2 million people. This technology, as it evolves, could eliminate traffic accidents. So that's an awful lot of people every year."

The car has lasers and radar mounted on its roof. It senses all of the objects around the vehicle, even some a human driver wouldn't notice or can't see.

Steve Jurvetson, a venture capitalist and self-driving car enthusiast, says safety is a huge benefit, but that's just the beginning.

"Because we are going to go from about a billion cars on the road today to about 2 [billion] to 4 billion in the next 50 years, we can't accommodate that in anything approaching the infrastructure we have in place," Jurvetson says.

Picture global gridlock. If we don't do something dramatic to enhance infrastructure or the way cars drive, Jurvetson says, the traffic jams will be unimaginable.

"But with autonomous cars, they can drive two to three times more densely," he says. "You could, in fact today, remove all traffic jams from America if all cars went this way."

Saving a million lives a year and preventing a global carmageddon are huge promises for a technology still in its infancy, but those things are not going to be what sells the self-driving car. What's going to make people buy it is convenience.

As the father of three kids whose activities include volleyball, violin, swimming, soccer, softball, gymnastics and trombone, the idea of dispatching a self-driving minivan after school sounds like automotive nirvana. That's the promise, but there are still some legal problems to work out.

For instance, if a self-driving car runs a red light and gets caught, who gets the ticket?

"I don't know — whoever owns the car, I would think. But we will work that out," Gov. Brown said at the signing event for California's bill to legalize and regulate the robotic cars. "That will be the easiest thing to work out."

That may be true, but Bryant Walker Smith, who teaches a class at Stanford Law School this fall on the law supporting self-driving cars, says eventually one of these vehicles will get into an accident. When it does, he says, it's not clear who will pay.

"The question becomes: If you put a 15-year-old in the vehicle and press the go button, are you — the person sitting at home — the driver, or is it the person in the car?" Walker Smith says.

Or is it the company that wrote the software? Or the automaker that built the car?

When it came to assigning responsibility, California decided that a self-driving car would always have a human operator. Even if that operator wasn't actually in the car, that person would be legally responsible.

It sounds straightforward, but it's not.

Let's say the operator of a self-driving car is inebriated; he or she is still legally the operator, but the car is driving itself.

"That was a decision that department made — that the operator would be subject to the laws, including laws against driving while intoxicated, even if the operator wasn't there," Walker Smith says.

Technically, at least, that person could get a citation for driving under the influence while he or she was still sitting on a bar stool, he says.

Quirks in the law like that one should be relatively simple to iron out. Officials at the California Department of Motor Vehicles now have two years to write the final rules.

Still, issues surrounding liability and who is ultimately responsible when robots take the wheel are likely to remain contentious. Already trial lawyers, insurers, automakers and software engineers are queuing up to lobby rule-makers in California's capital.