Accessibility links
A Contest To Build A Disaster-Ready Robot : All Tech Considered The Pentagon's research agency, known as DARPA, is challenging scientists to develop robots that can work in man-made disasters like Fukushima. The goal is to develop machines that can be easily operated immediately after disasters strike. 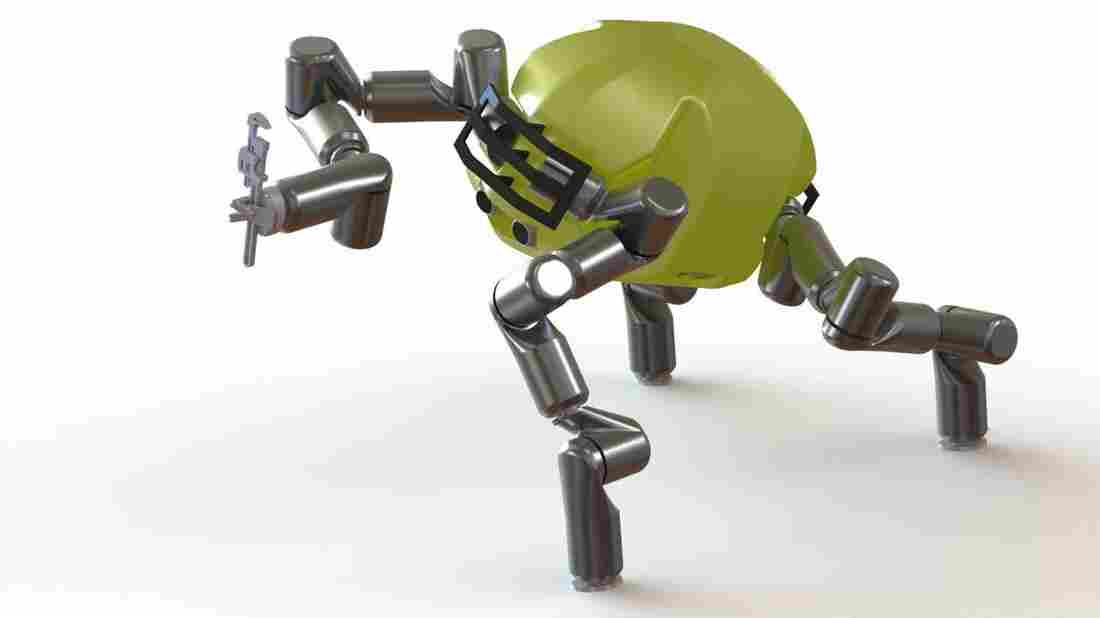 The "RoboSimian" from NASA's Jet Propulsion Laboratory has the advantage of being able to grasp things with all four limbs, like a chimp. It will compete in the DARPA Robotics Challenge. NASA/JPL-Caltech hide caption 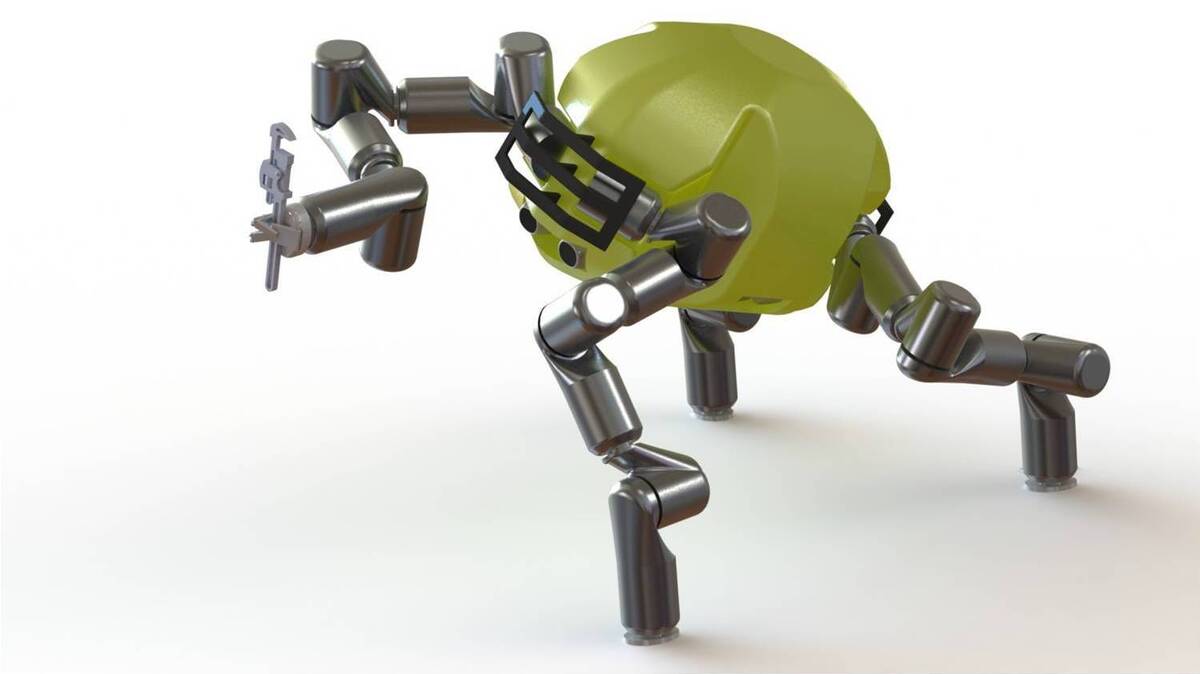 The "RoboSimian" from NASA's Jet Propulsion Laboratory has the advantage of being able to grasp things with all four limbs, like a chimp. It will compete in the DARPA Robotics Challenge.

When disasters hit, relief workers often have to put their own lives at risk. Many workers at the Fukushima nuclear reactor in Japan received dangerous doses of radiation after the accident there last year. The Pentagon hopes a contest to build a better robot will make it easier and safer to mitigate disasters.

Immediately after the tsunami and explosions that damaged the Fukushima plant, workers had no way to access areas where radiation levels were lethal. Robots from Massachusetts-based iRobot had to be rushed in. iRobot CEO Colin Angle says valuable time was lost as personnel were trained how to use them.

That's why DARPA, the Defense Advanced Research Projects Agency, this week launched a "Robotics Challenge," to encourage the development of robots that anyone can use.

A Robot The Size Of A 10-Year-Old Boy

Seven hardware teams announced this week will compete for a $2 million prize. Among the robot competitors is an entry called "Hubo."

Professor Paul Oh, who leads the Drexel University team that built Hubo, says the robot is about 4-feet-3 inches tall — about the size of a 10-year-old boy.

This week, Drexel and the other teams learned some of the challenges Hubo will face in a junkyard-wars-style competition next year. The robots will have to open a blocked door, operate a valve, climb a ladder. And perhaps the toughest: get into and drive a vehicle.

Oh says when we drive, we rely on lots of sensations. When you hit an obstacle, you can feel it with your wheel, and you can hear it. 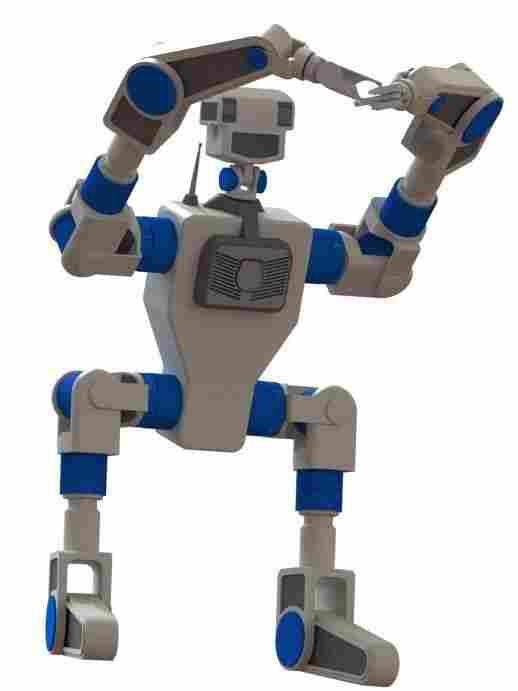 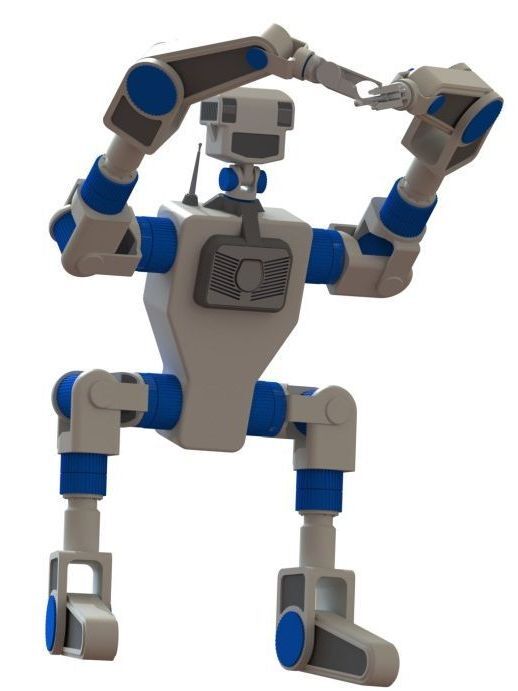 An unnamed robot that the Carnegie Mellon National Robotics Engineering Center plans to build for the DARPA Robotics Challenge.

"These are all perceptual challenges that we have to teach our robot," he says.

Oh and the other researchers have until next year to teach their robots these tasks. During the actual challenge, DARPA folks will be throwing a lot of curves at the competitors, like messing with their communications. You'd expect a lot of radio interference if you were working in a damaged nuclear reactor or in a collapsed building after a terror attack.

Nicholas Radford of the NASA team from the Johnson Space Center says it's just like planning to send a robot into space.

"A lot of our research at NASA JSC for the last 10 years has focused primarily on how we deal with systems in remote locations with crappy communication," Radford says.

Advantages Of The Human Form

The NASA Johnson entry is derived from the Robonaut. There's one on the International Space Station right now. It's pretty humanoid looking. Radford says, in this challenge, the human form has lots of pluses because the contest focuses on human-built, industrial environments.

But the human form has its limitations. So another entry takes a backward evolutionary step. The "RoboSimian" from NASA's Jet Propulsion Laboratory has the advantage of being able to grasp things with all four limbs, like a chimp. But JPL's Brett Kennedy says he hasn't yet figured out the car-driving thing yet.

"Sitting in a seat designed for a human when you don't look as human-like is going to be interesting. It can be done, but it might look a little awkward," Kennedy says.

This is complicated stuff. But DARPA's Gill Pratt says, in order to win the challenge, these robots have to be easy to use. The goal is for workers on the scene already trained in nuclear safety to be able to turn to these robots.

If you're wondering why the Defense Department is spending money on something like this, Pratt says the answer is simple: "Both humanitarian assistance and disaster relief is one of the 10 primary missions that the U.S. Department of Defense has that works throughout the world."

Of course, Pratt says, there's always the chance the technology will find its way onto the battlefield. But the focus now is saving lives by keeping relief workers safe.