Accessibility links
What's The Big Idea? Pentagon Agency Backs Student Tinkerers To Find Out : All Tech Considered The Pentagon's research agency, DARPA, played key roles in developing the Internet and GPS. Now it's investing money in high school hackerspaces, where students gather to come up with high-tech ideas — like a bicycle that generates electricity. 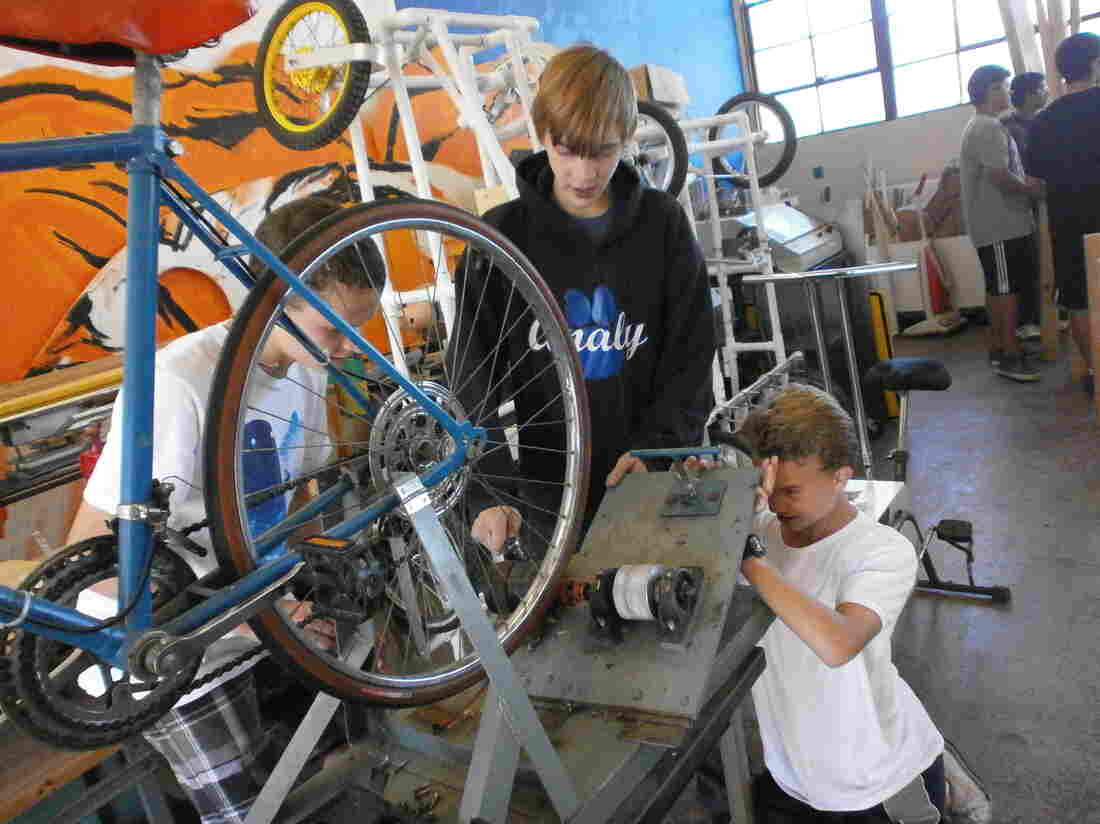 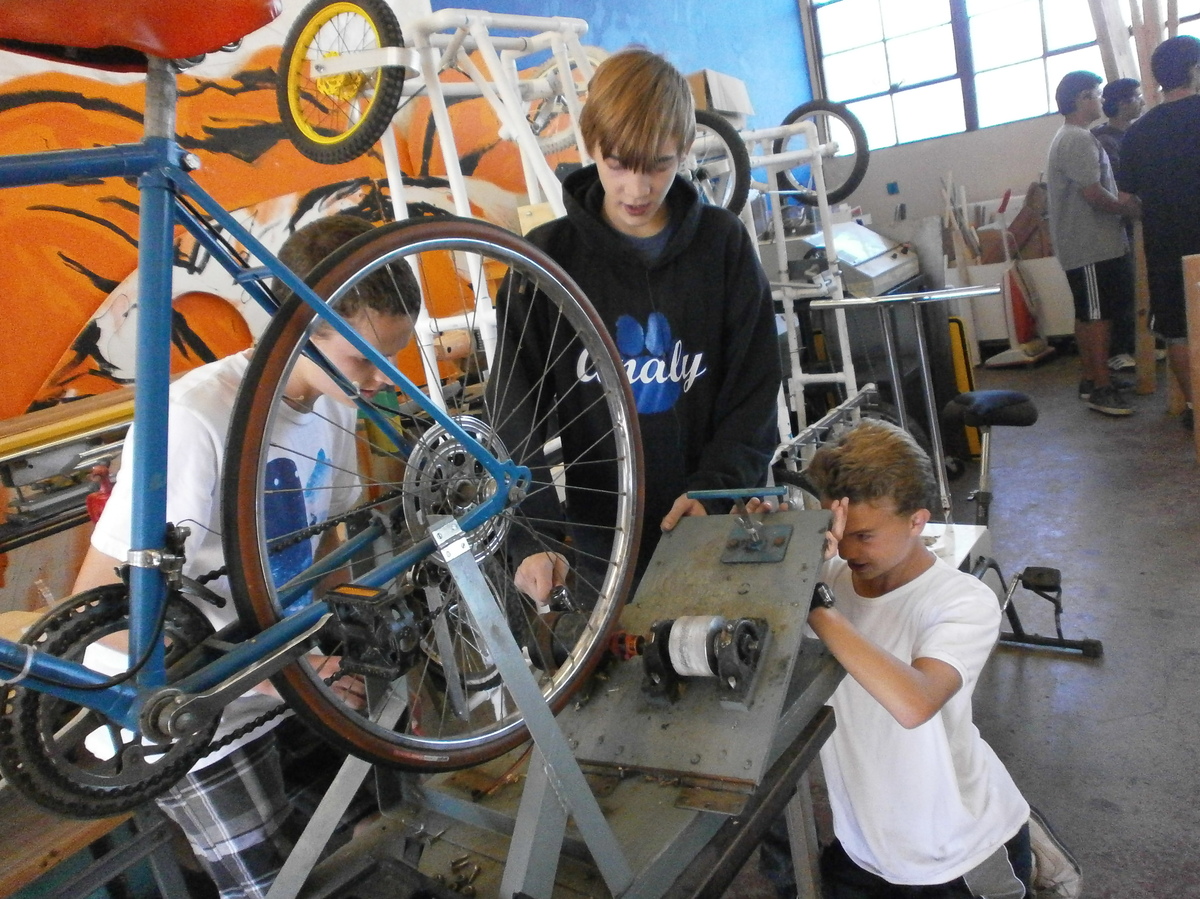 At Analy High School in Sebastopol, Calif., three students are taking apart a bicycle that generates electricity. Another student is calibrating a laser cutter. They're all working in a cavernous building that once held the school's metal and electronics shop. Let's just say it has been updated.

"I'm thinking that I might make a quadrocopter and a tremolo. It's a type of guitar thing that uses light to change the volume. And a few other things; we'll see," says Gabe Cook-Spillane, a senior at Analy High.

A quadrocopter is a small, battery-powered drone that is hugely popular at hackerspaces. These are democratically run work spaces, usually supported by dues, where crafters, builders and computer geeks share tools. They can make robots, modify bicycles, or even knit. 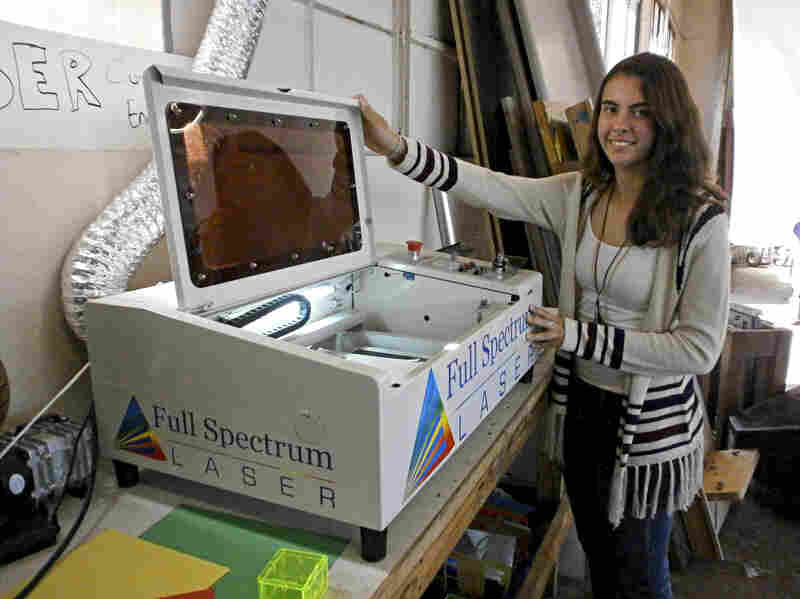 Jessie Davidson shows the school's laser cutter, which is used to burn the school insignia onto plastic objects, among other things. Jon Kalish for NPR hide caption 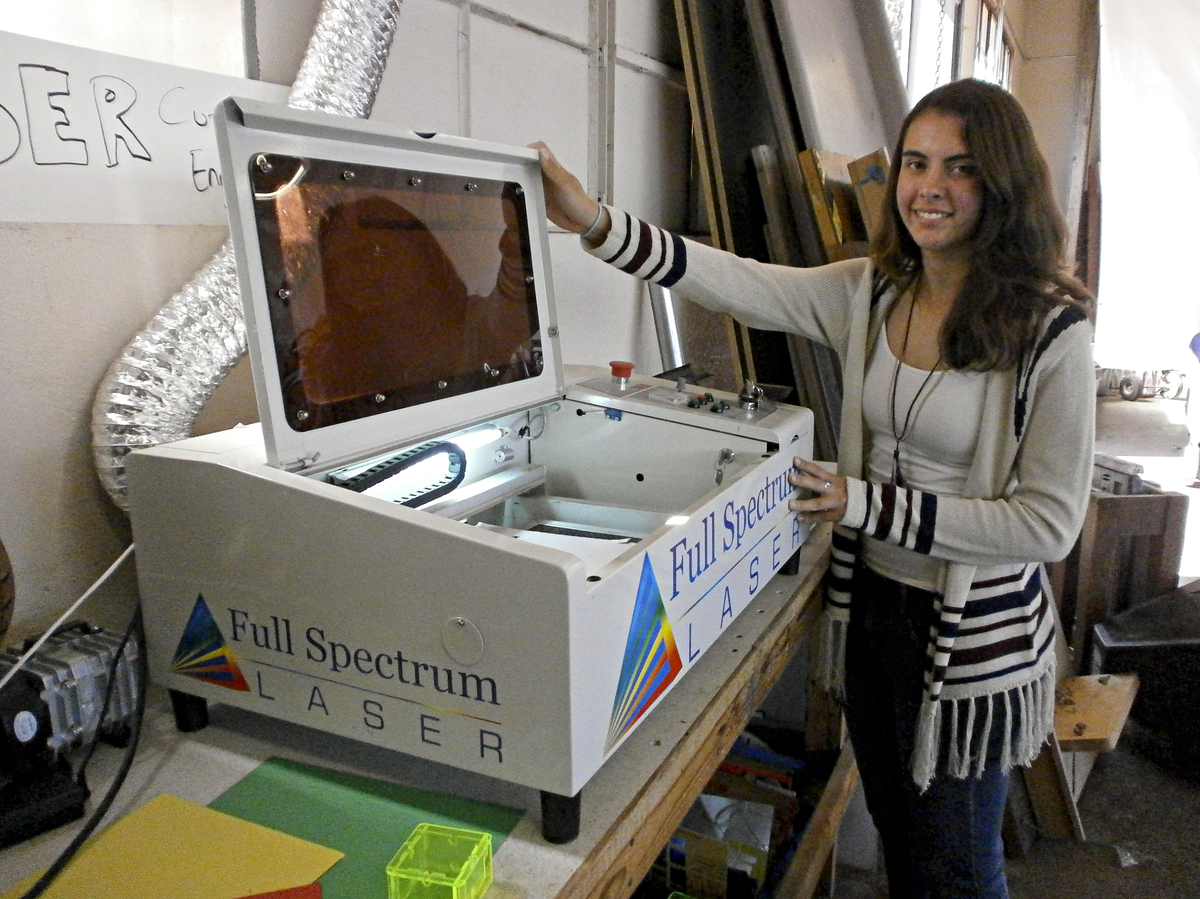 Jessie Davidson shows the school's laser cutter, which is used to burn the school insignia onto plastic objects, among other things.

The military has started putting millions of dollars into hackerspaces. The money comes from the Defense Advanced Research Projects Agency, or DARPA.

It has been called the Defense Department's venture capital firm. In the past, it played a key role in the development of GPS systems and the Internet. Now, a big portion of the new money will go to fund high-tech workshops in high schools.

Investing In The Future

"We're thinking about this as the shop class for the 21st century," says Saul Griffith, a MacArthur genius grant recipient whose San Francisco engineering firm is helping to launch the high school hackerspaces.

When Griffith refers to digital manufacturing, he's talking about computer-controlled machinery that cuts material or builds something from scratch, such as 3-D printers. The workshop at Analy High School is one of 15 in Northern California receiving DARPA funding.

The Pentagon's research agency has committed $10 million over four years and hopes to expand the program to 1,000 high schools nationwide by 2014. Lt. Col. Nathan Wiedenman of DARPA's Tactical Technology Office says the investment is in the national interest.

"We think it's important enough to support a program that gives students an opportunity to engage with these technologies, use them, play with them, give them a chance to design something themselves, and manufacture it right then and there with a desktop programmable piece of manufacturing equipment," Wiedenman says. 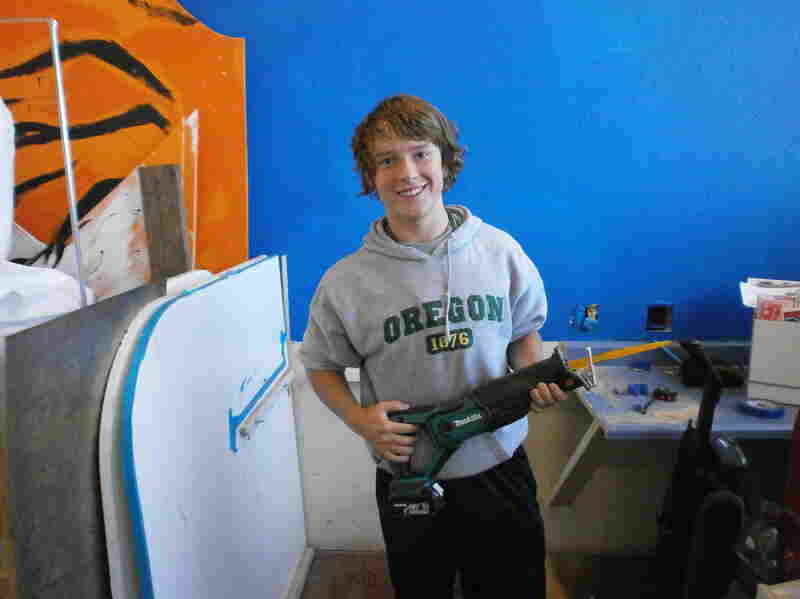 Austin Hay holds a reciprocating saw, which he used to cut part of an existing counter in the workshop so students could build storage space. Jon Kalish for NPR hide caption 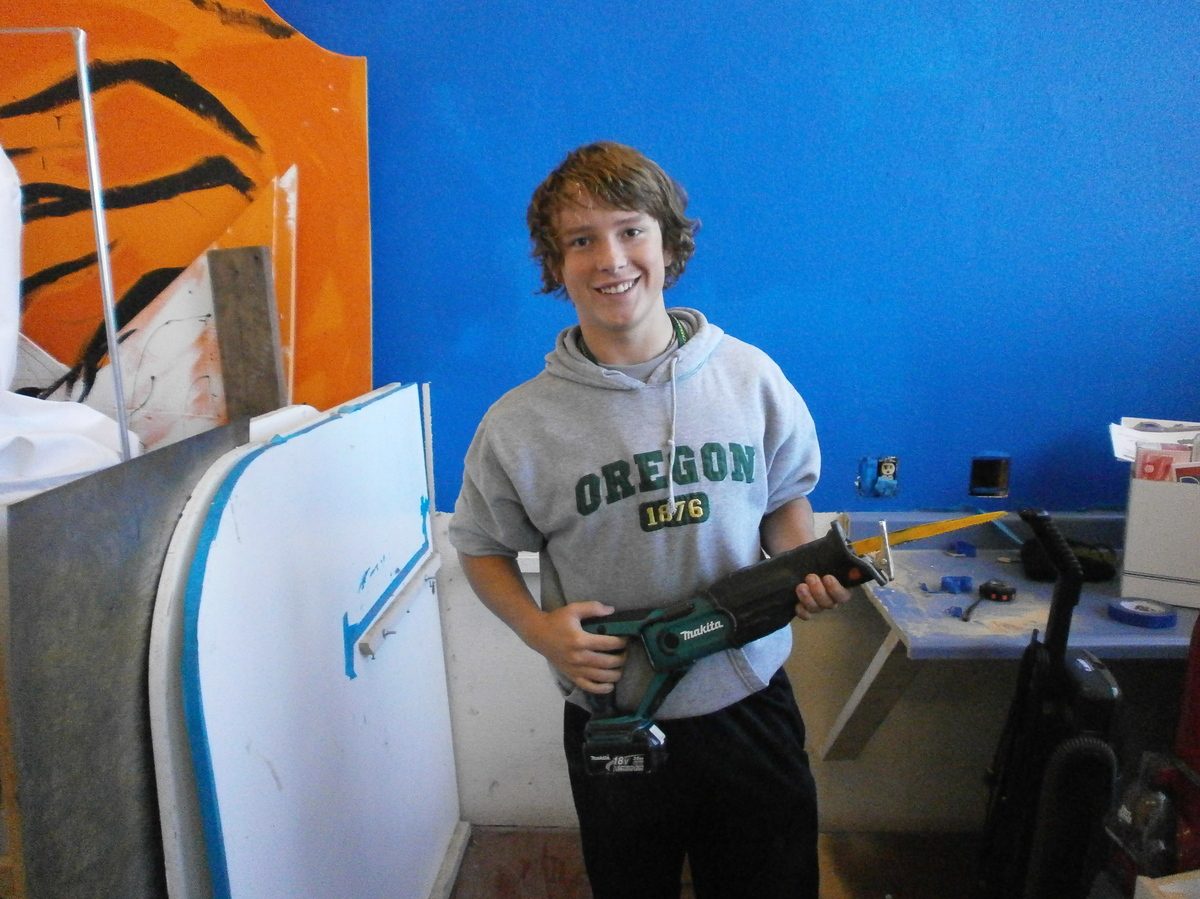 Austin Hay holds a reciprocating saw, which he used to cut part of an existing counter in the workshop so students could build storage space.

Makers And The Military

The notion that DARPA would fork over defense funds to a bunch of Red Bull-swilling hackers may strike you as odd, but the agency realizes that there is serious talent and innovation thriving in hackerspaces.

Other key players in the community of makers and tinkerers don't have a problem with the military funding.

"I respect and appreciate the hacker community, and it hurts me to think that some people might be alienated from our work because of the DARPA connection," says Dale Dougherty, publisher of Make magazine, often described as the bible of the do-it-yourself movement.

"I have to say that it comes down to a certain pragmatic sense [that] we get to do this work, which is really important. And so I don't have any reservations about it or concerns," he says.

Some of that money is already at work back at Analy High School. Casey Shea, a teacher there, shows off a T-shirt cannon and a pedal-powered four-seater, both made from white PVC pipes.

No worries there. Students, like sophomore Wyatt Belden, are definitely willing to go wild.

"I would like to make something like a couch that's completely electric and maybe even solar-powered. And that'd be a lot of fun. You can just drive around on a couch," Belden says.

Not exactly what DARPA is looking for — but it's more than willing to invest in his future.