Accessibility links
Forget The Register: Stores Use Mobile To Make Sales On The Spot : All Tech Considered Cash registers may be on the wane in some stores as more retailers help customers complete purchases using mobile devices. It's convenient for shoppers, and retailers benefit by leaving customers less time to change their mind about a purchase. 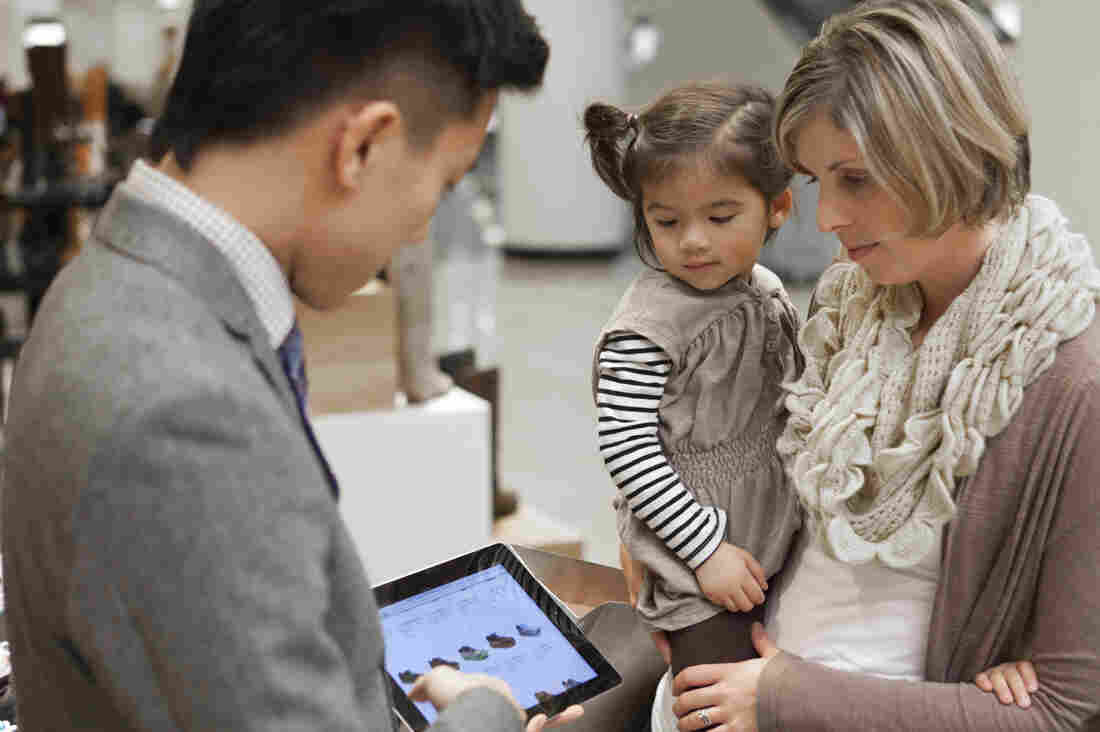 A Nordstrom salesperson shows a customer an online selection of shoes on an in-store iPad. Like some other retailers, Nordstrom is using mobile devices to make on-the-spot sales and check companywide product inventory instantly. Courtesy of Nordstrom hide caption 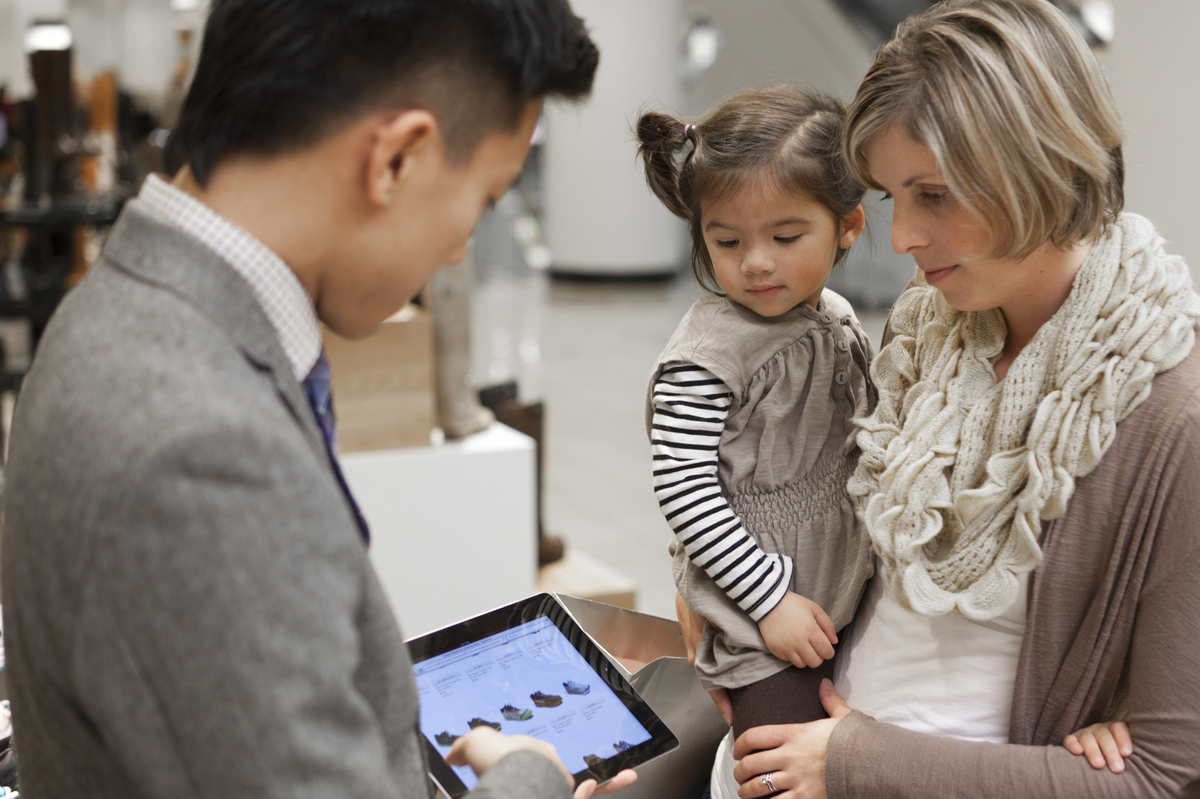 A Nordstrom salesperson shows a customer an online selection of shoes on an in-store iPad. Like some other retailers, Nordstrom is using mobile devices to make on-the-spot sales and check companywide product inventory instantly.

The women's shoe department at Nordstrom's flagship store in Seattle is bustling. Shoppers are trying on everything from stilettos to rain boots — and when they're ready to buy, they can pay up right where they are.

The sales associate simply whips out a modified iPod Touch and scans the shoe box's bar code. The handheld device contains a credit card reader, too, so the customer can just hand over the plastic and sign with a fingertip. There's no trek to the cash register and no line to wait in.

At department stores like Nordstrom and at other traditional retailers, mobile devices are slowly beginning to supplement, and even replace, other methods of payment. In many cases, buying something is becoming more efficient and more personal.

"We think the days of the big clunky cash register ... anchoring down a department are really going away," says Colin Johnson, public relations director for Nordstrom.

"We are always going to have a place for the cash and we'll certainly take care of however the customer wants to pay," Johnson says. "But we do see the future as essentially completely mobile."

Mobile payments certainly make shopping easier. And while customers like it, retailers benefit, too. When shoppers pay on the spot, they don't have time to change their mind and decide they don't really need what they are about to buy.

"There isn't a retailer we talk to that isn't embracing at least a blended, if not an 'all-in,' approach to mobile point-of-sale," Brunk says. 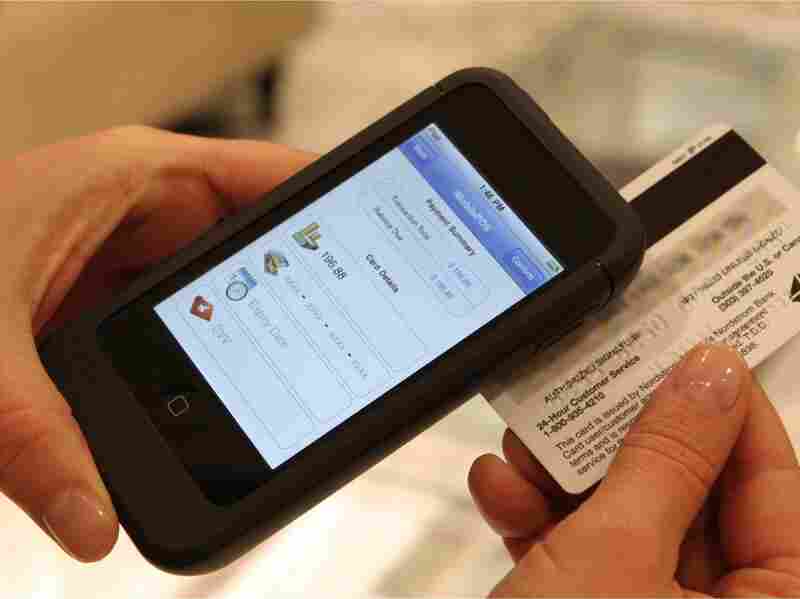 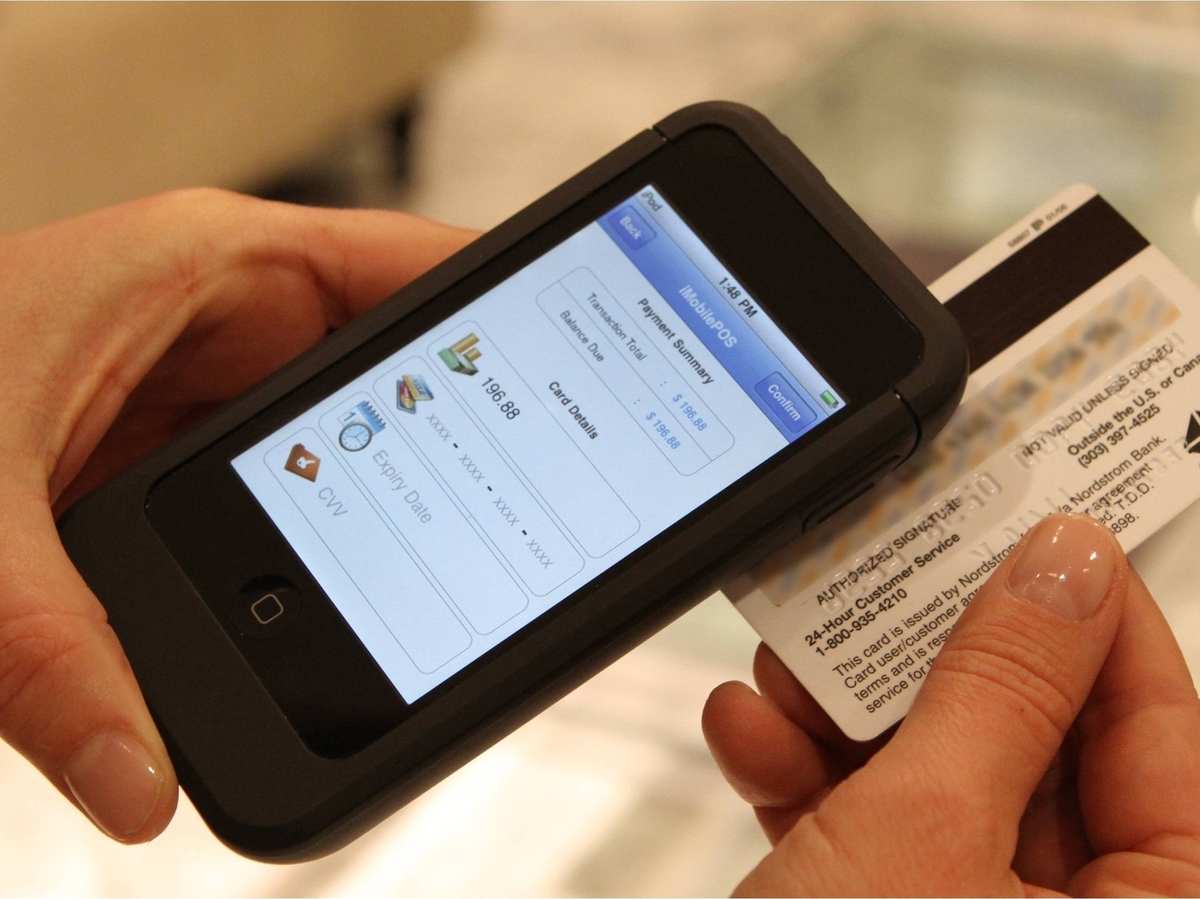 But the changes taking place in retail go well beyond checking out via handheld device, he adds.

"You have to embrace the online — the digital world," Brunk says. "It's really now, how are you going to blend those two together? Because that's what the customer is really expecting."

Getting Goods To Customers Who Want Them

Take inventory, for example. It wasn't all that long ago, says Nordstrom's Colin Johnson, that customers found it charming when a clerk called around to different stores in search of an out-of-stock item.

But "those days are long gone," Johnson says. "You've got to be rapid, you've got to be on the spot. You have to have that information at your fingertips."

Or, more precisely, on an iPod — which is how shopper Amidy Doolittle purchased some glittery flats and a pair of suede shoes. "I just had [the clerk] order some shoes that weren't available in the store," Doolittle explains. "He looked them up on his mobile device, and I paid sitting right here in my chair."

What's most remarkable about Doolittle's purchase is that the sales clerk had access to Nordstrom's entire companywide inventory on his device.

While that might sound pretty basic to many shoppers, Kasey Lobaugh, a retail expert at Deloitte Consulting, says some retailers have struggled to integrate inventories of in-store and online products.

All too often, Lobaugh says, shoppers would be told their desired item was out of stock, when the retailer did, in fact, have the goods.

Do These Pants Make Me Look ... ? Body Scans For A Better Fit

And in another plus for retailers, he says, "If you are able to fulfill the item from the place where the items are turning the slowest, you're able to decrease the markdowns that you have to take" if you were to sell that item at its original location.

In other words, winter jackets languishing in a Florida store can be quickly shipped to a Seattle shopper — and sold at full price.

Yet another change under way relates to something you see all the time: the practice known as "showrooming." Increasingly, customers with smartphones are checking out products and competitors' prices online as they roam the aisles of brick-and-mortar stores.

Early on, Lobaugh says, some retailers were unhappy about the trend and weren't keen to embrace it.

But "our data would say don't resist it," Lobaugh notes. "Give them the capability. Enable Wi-Fi in your store so that the consumer can access more information, because the conversion rate goes up," he says — meaning, smartphone-toting customers who do research on the sales floor are actually much more likely to make a purchase.

And by 2016, Deloitte projects, roughly one in five consumers will be using their smartphones in precisely that way.