Accessibility links
Don't Like The Government? Make Your Own, On International Waters : All Tech Considered A nonprofit called The Seasteading Institute is advancing a hugely ambitious scheme: constructing floating structures that will house hundreds of people in international waters, out of the jurisdiction of any nation. Now, the organization has attracted its first big name donor. 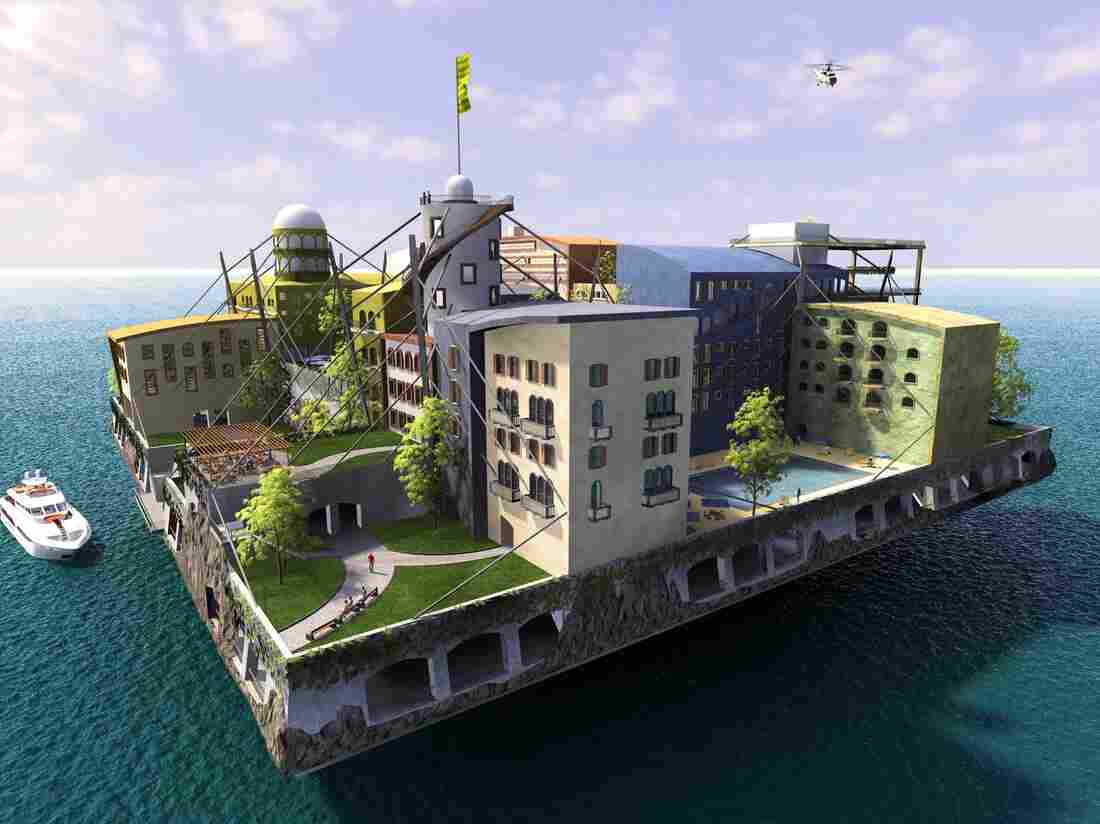 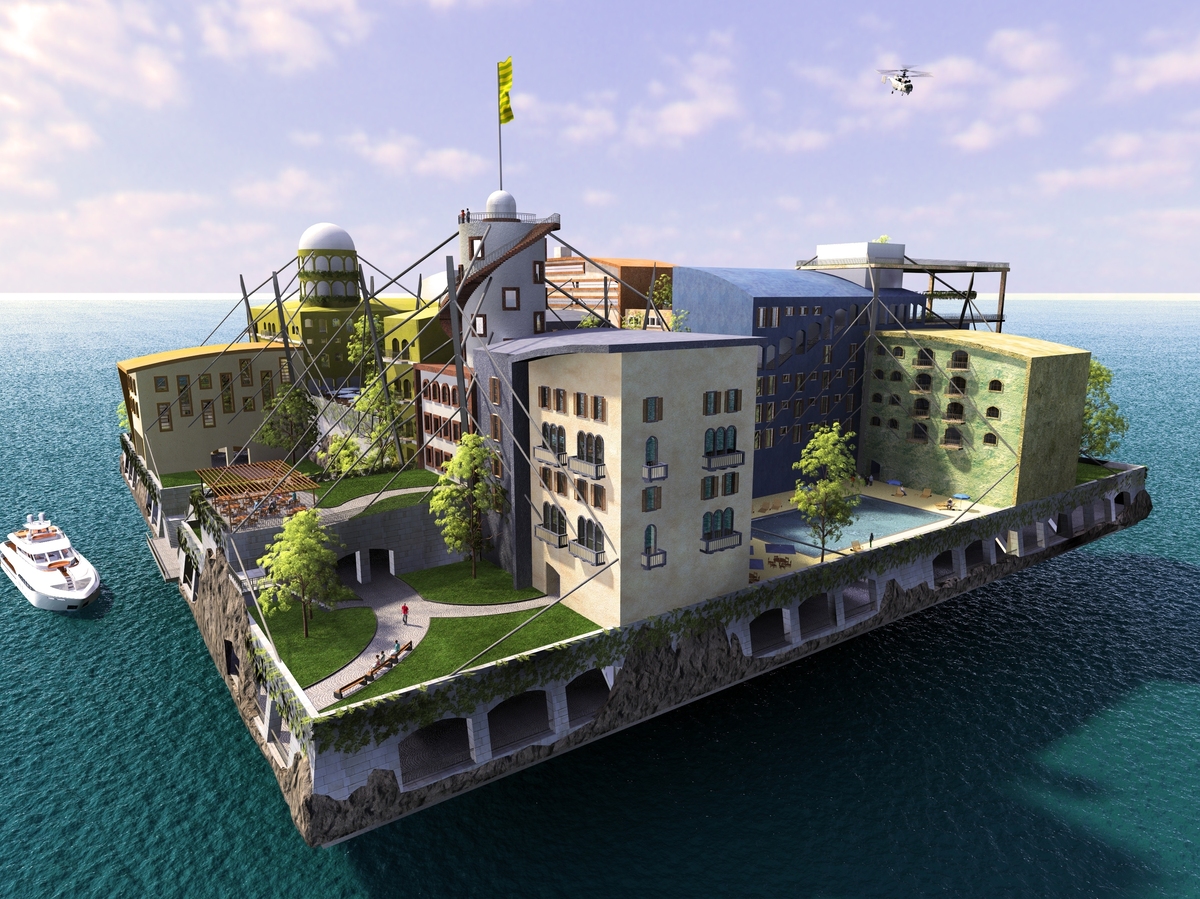 Andras Gyorfi's winning entry in The Seasteading Institute's 2009 design contest. The institute supports the idea of permanent, autonomous offshore communities, but it does not intend to construct its own seasteads.

Courtesy of The Seasteading Institute

Almost all of us have complaints about the government, which probably range from high taxes to too much bureaucracy. Periodically, we get to take our frustrations out at the voting booth. But no matter how unhappy you may be, you probably never thought, "I'm going get out of here and go start my own country."

A group of rich techies in Northern California is planning on starting its own nation on artificial islands in the ocean. They call themselves "seasteaders" and are sort of a mix between geeks and hippies.

The visionary behind the group is Patri Friedman. The former Google software engineer also happens to be the grandson of the Nobel Prize-winning economist and free marketeer Milton Friedman.

It's his voice that opens a trailer for a documentary about the seasteaders. As his words float above visuals of rolling waves we hear what sounds like a vision of paradise at sea.

Friedman imagines that on these islands there will be "a lot of tourism from the world. The most cutting-edge hospital facilities on the planet. Probably the largest fish farms in the world." 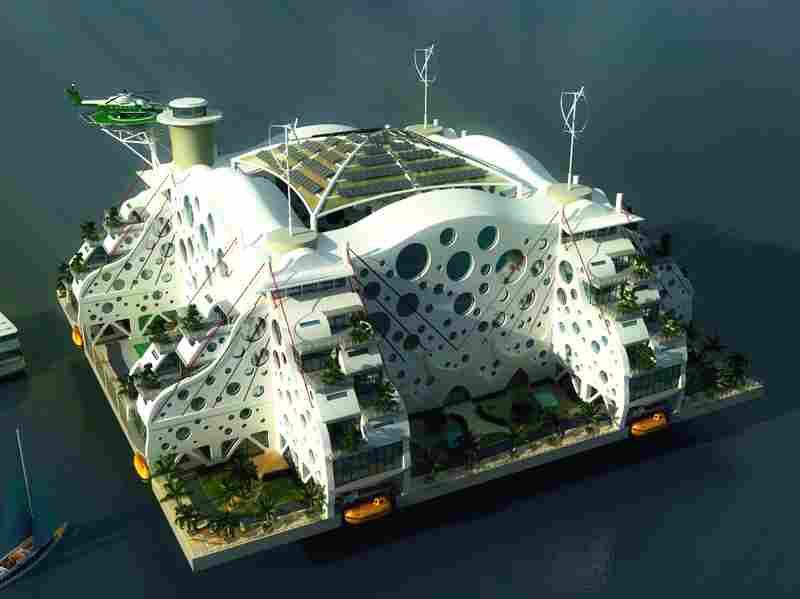 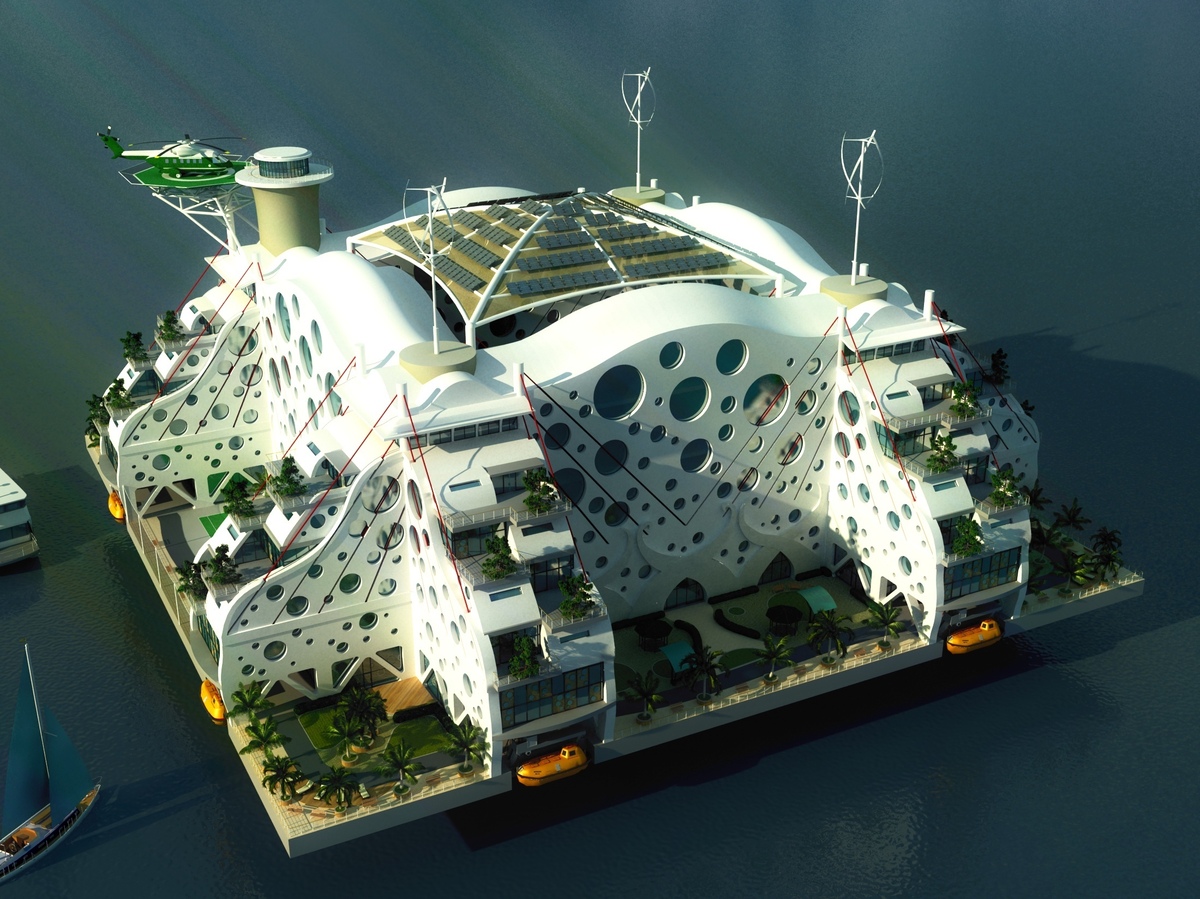 A winning entry in the Seasteading Design Contest by Emerson Stepp.

Courtesy of The Seasteading Institute

And for foodies: "Best sushi you can imagine."

The seasteaders have been meeting regularly at bars in Silicon Valley and San Francisco to discuss their plans for creating nations at sea.

One meeting at a bar in Millbrae, Calif., drew a mix of people with long hair, beards and wizened faces; casually dressed engineer types; and a few suits. It was mostly guys.

There was a lot of chatter about what's wrong with our country — everything from the school systems and the bickering in Washington to the rising price of health care and long lines at the department of motor vehicles.

"They just want to avoid taxes so they can own what they make," says filmmaker Adam Jones, who became part of the group because he shares their frustration. "So they can truly be free and that's the nature of true liberty and that's what the founders wanted in America."

There's revolution in the air here.

Michael Keenan, the former president of The Seasteading Institute, opens the meeting. The institute is a nonprofit that helps get backing for groups that want to start island nations.

Keenan leads the discussion, which is all about the practicalities of life at sea: everything from desalinating sea water, to using waves to create electricity, to figuring out how to build homes.

But it certainly doesn't sound like the rough and tumble lives of the Back-to-the-Land Movement in the 1960s. Keenan says seasteaders will most likely begin life "with retrofitted cruise ships and barges" docked in international waters. 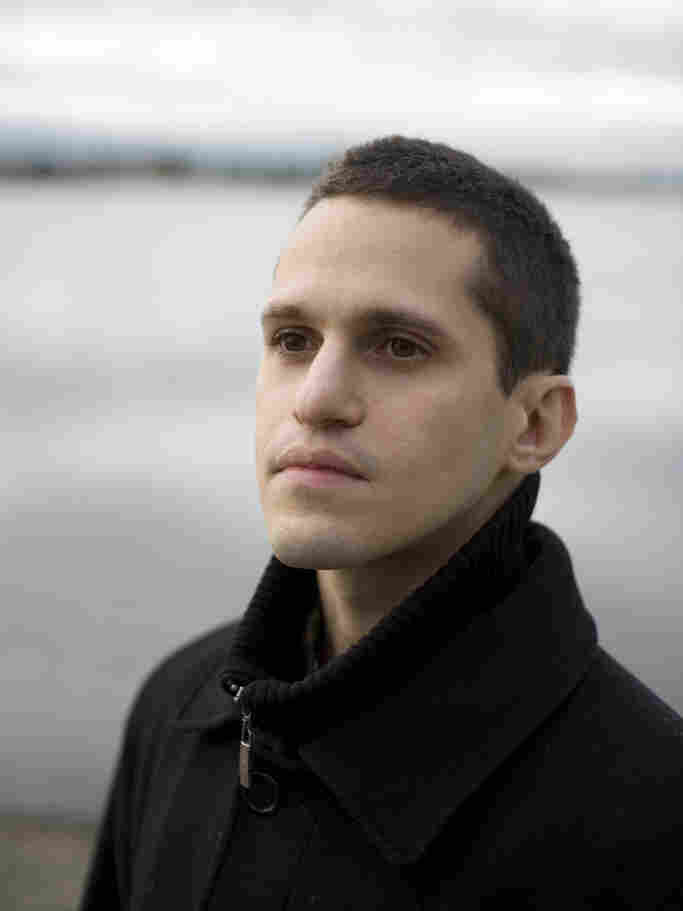 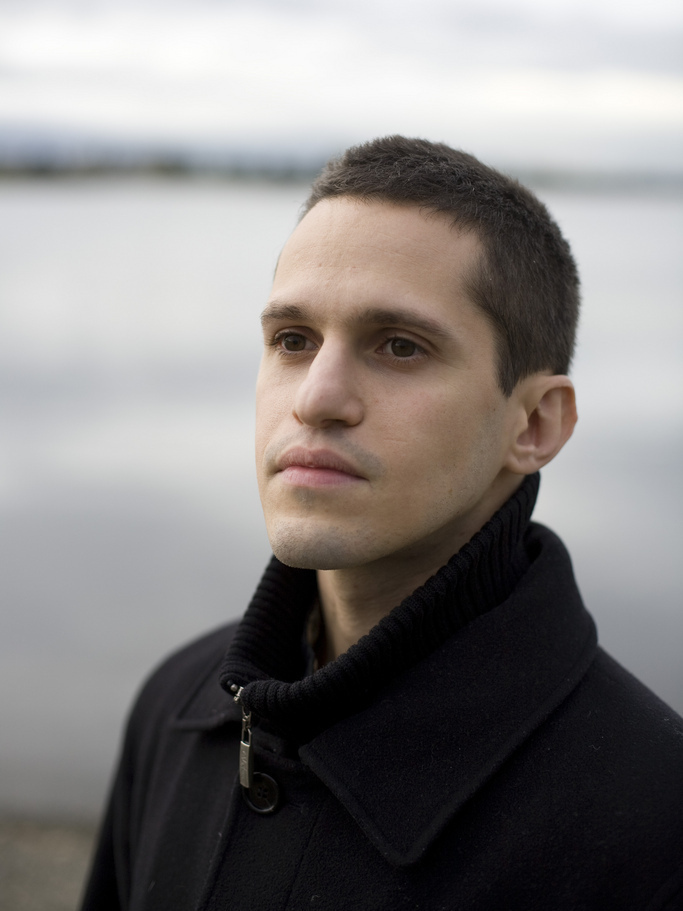 Patri Friedman, head of The Seasteading Institute, says the beauty of his vision for seasteading is choice.

Christopher Rasch/Courtesy of The Seasteading Institute

He says they are also working on ways to create artificial islands using technology from oil rigs.

"That is the core of the future of seasteading: sustainable businesses," Keenan says. "And so our huge focus right now is on basically enabling more seasteading business."

Vote With Your Boat

The seasteaders do have some hefty backers. Among them is Peter Thiel, an early investor in Facebook and PayPal, and of course Patri Friedman.

Like his grandfather, Friedman is a believer in free markets and would like to see a libertarian nation on the ocean. But the ocean is big, and Friedman sees room for plenty of different kinds of governments.

"If we can figure out how to let people create startup countries, they might start different laws and institutions and constitutions," he says.

Friedman says there can be competition between the nations over the best form of government the same way there is in business. People could pick their government the way they do computers and coffee.

"What if I got the same type of service from my government that I do from Apple and Starbucks?" he says. "What an awesome world that would be!"

But Friedman's comparison to businesses raises red flags for Holly Folk, an expert on alternative communities.

"It's difficult for me to respond positively to a movement that says, 'OK, let's create a carve out for people who have the resources to in some ways game the global system,' " she says.

The Sea Is A Harsh Mistress- Redux from jason sussberg on Vimeo.

Folk thinks if the seasteaders got in trouble on the high seas they'd probably need help from taxpayer-supported services like the Coast Guard.

A professor at Western Washington University, Folk has studied a lot of alternative communities within the U.S. She says the ones with shared religious beliefs, like the Pilgrims, last the longest.

Many alternative communities start out with lofty ideals, she says, but the challenges of sharing resources and living together are often greater than people imagine.

Folk says the seasteaders might find it even more challenging because of their "individualist, libertarian flavor."

"You're talking about a worldview that's going to be attractive to people who are in some ways probably not hard-wired to behave and take orders very well," she says.

Folk says the history of the U.S. is littered with intentional communities that fell apart. Some run out of money and then bicker over who gets the last piece of bacon; others don't last because the second generation doesn't want to keep the community going.

But, Friedman says, the beauty of his vision is choice. Just like you can pick what computer to buy, you can pick your government.

"I won't go there if it looks like it's going to be Lord of the Flies," he says.

Friedman says no one is being forced into this.

"So people aren't going to go there unless it looks like it's safe," he says.

The first community that calls itself a seastead doesn't really sound like a country or even a community. It wants to put a ship off the coast of San Francisco so that entrepreneurs who can't get a green card can start a business and still be close to Silicon Valley. The community expects to launch in 2014 — and expects to be profitable.