Accessibility links
Kenyan Women Create Their Own 'Geek Culture' : All Tech Considered Say the words "high-tech startup" and chances are you picture a world that's mostly white, male and set in Silicon Valley. Now, a group in Nairobi, Kenya, is working to get more female entrepreneurs into the male-dominated world of tech. 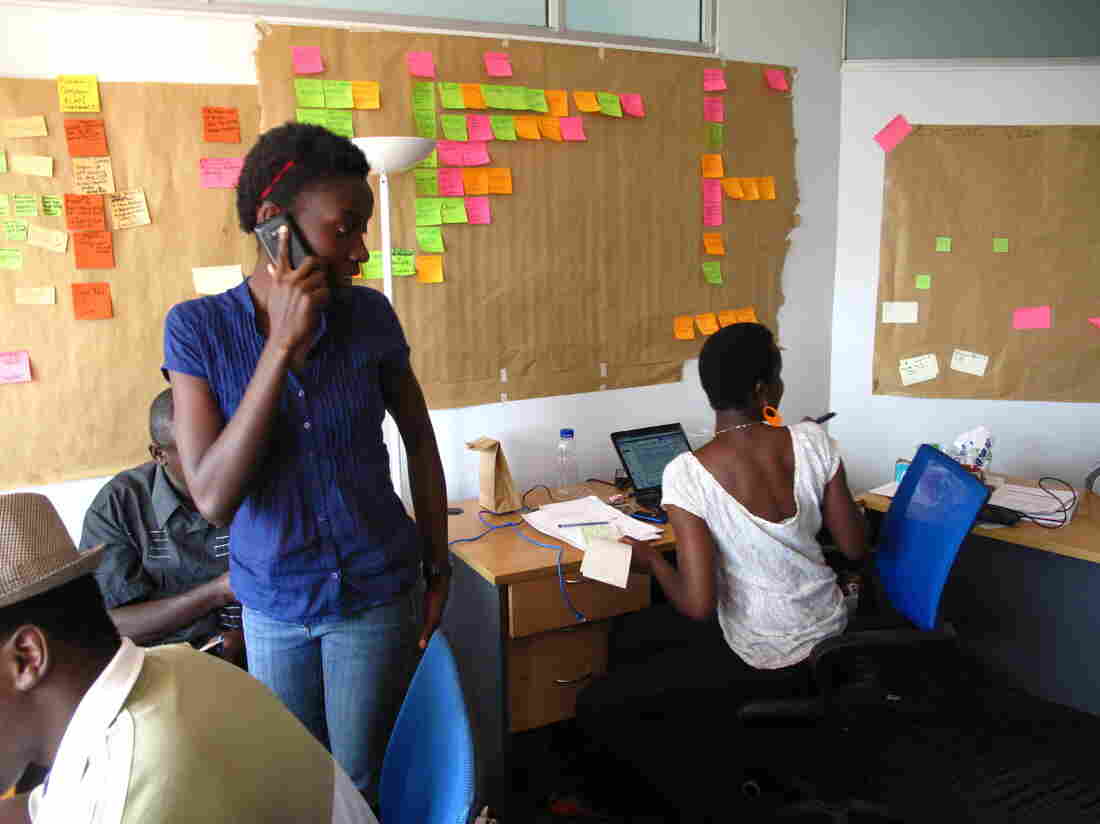 Kenyan Susan Oguya created an app to help farmers in her homeland. Shown here in the office of her company, M-Farm, she also belongs to the group Akirachix, which seeks to bring more Kenyan women into the tech world. Gregory Warner hide caption 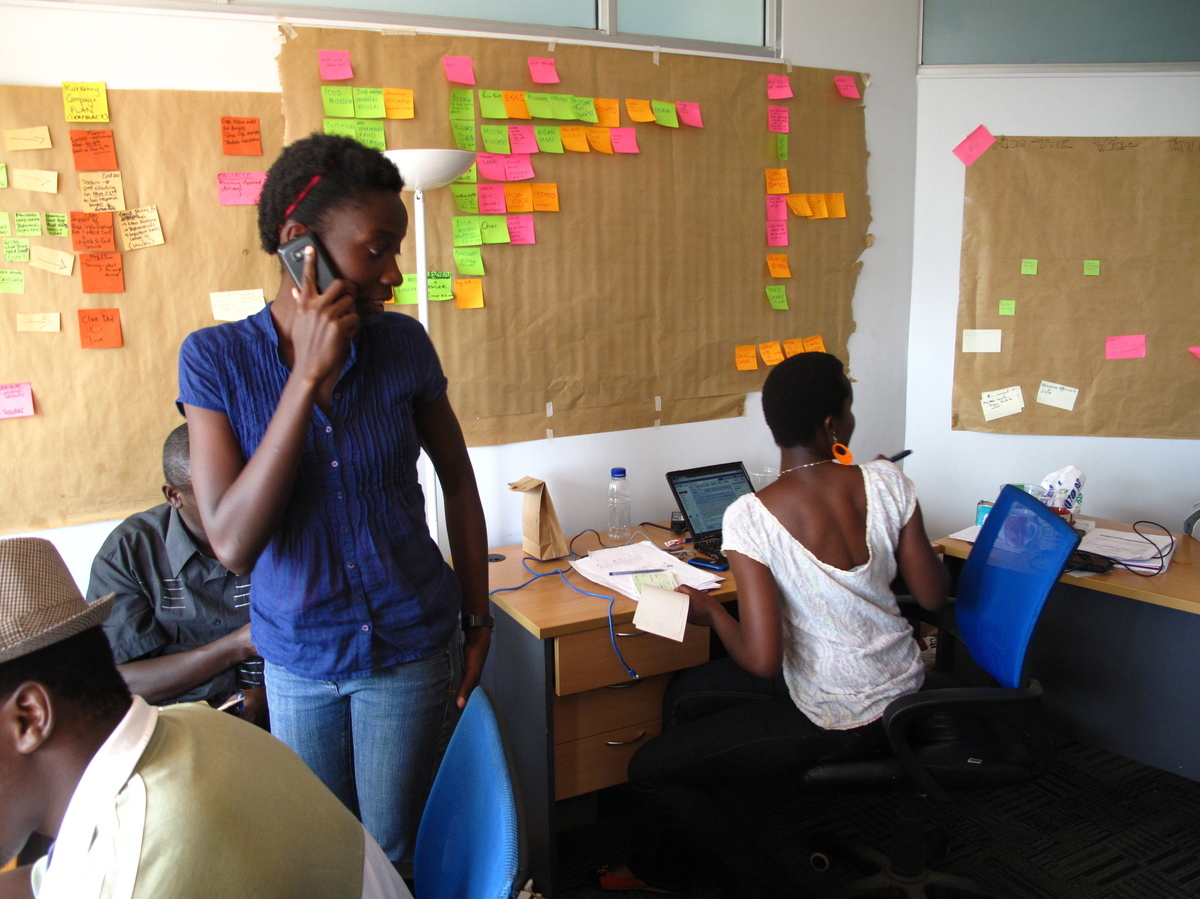 Kenyan Susan Oguya created an app to help farmers in her homeland. Shown here in the office of her company, M-Farm, she also belongs to the group Akirachix, which seeks to bring more Kenyan women into the tech world.

When a collective of female computer programmers in Kenya needed a name for their ladies-only club, they took their inspiration from the Japanese cult film Akira.

"So akira is a Japanese word. It means energy and intelligence. And we are energetic and intelligent chicks," says Judith Owigar, the president of Akirachix.

A group like Akirachix would have been unthinkable even five years ago. But Kenya is making a big push toward IT — part of a plan to create a middle-class country by the year 2030.

Kenya has laid hundreds of miles of fiber optic cable. Google and IBM set up shop here. The city even has plans for a $7 billion technology hub just outside the capital, Nairobi.

But you need more than tech giants and broadband and even money to launch a local tech industry. You also need a culture of computer geeks. That's where Owigar and her collective Akirachix come in. They want to make sure that the girl geeks are encouraged as much as the guys.

"You know you're the oddball just because of your gender," Owigar says.

"There are probably other women in tech who are alone, and they think they're the weird ones, but if enough of us meet together, you know, it won't be so weird anymore," Owigar says. 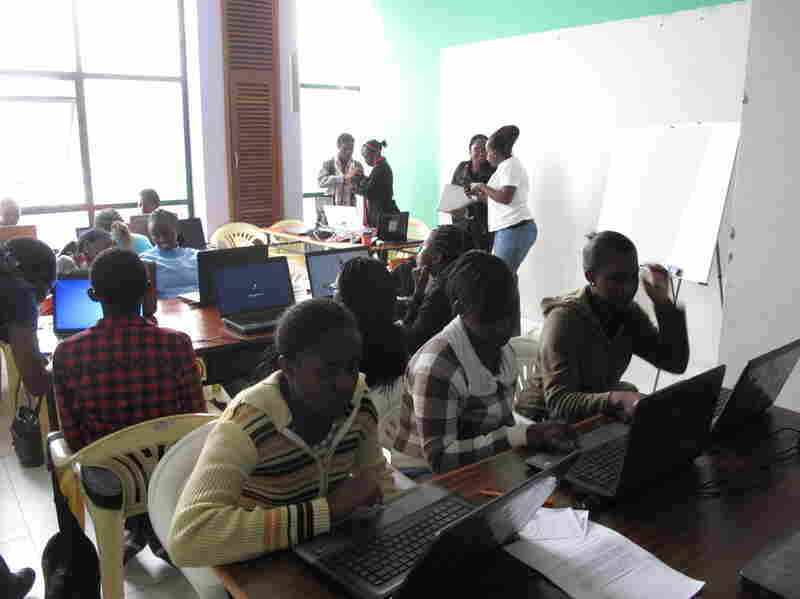 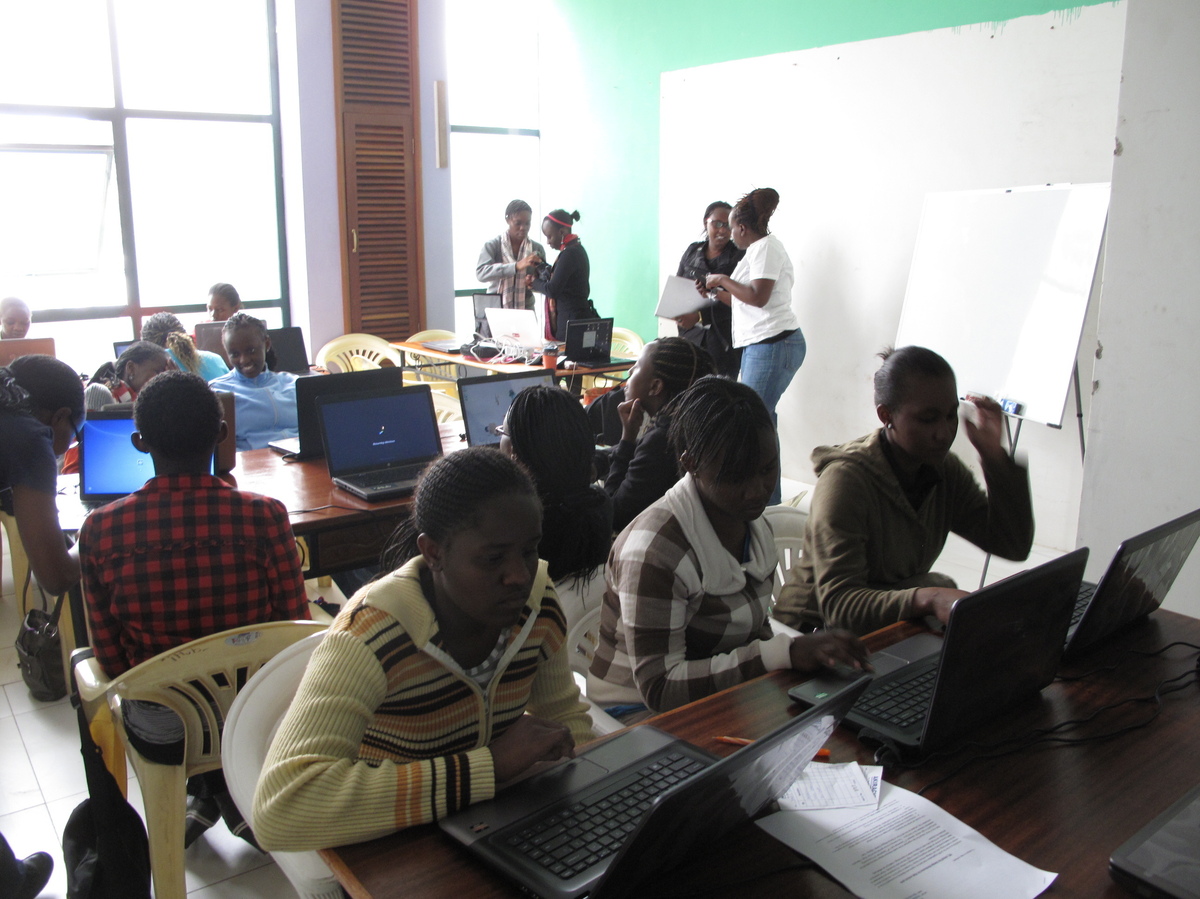 High school girls in Nairobi at a computer workshop organized by Akirachix.

Susan Oguya is also an Akirachick. She grew up on a farm in western Kenya without a computer. But she was lucky enough to have an uncle who worked in Nairobi.

When he came home for the holidays, he would haul his entire workstation in the car back with him — the monitor, the CPU, the keyboard, the mouse — and set it up in Oguya's living room. Oguya was 15.

"So he'd bring it over, we'd use it, and then he would go back with it," Oguya says. "So in the times when I didn't have a computer, there were books that he left. Books about what is a computer, parts of a computer, what is a ROM, what is a RAM. It's really basic."

When she got to a university, she majored in IT. She had an idea for a mobile phone app that would help farmers like her parents.

One of the striking things about Kenya is that even impoverished farmers have cellphones. For decades, Kenya was too poor to lay copper telephone wire in the ground, so the vast majority of Kenyans use cellphones as their primary phone.

Now, all those Kenyan cellphone users are set to take advantage of an increasingly mobile world. Oguya's app would allow farmers to check the crop prices with text messaging, skipping the middleman.

But Oguya was one of only 10 women in her department of 80 — about the same ratio you'd find in a computer science class at Stanford. Her teachers doubted her ability to actually program this app she'd thought up.

"In my culture, it's like men can only communicate with men. And I was like, 'OK.' Then if I could share this passion, like try and explain to the person, this is what I want to do? It's only a woman who could understand me better," Oguya says.

It wasn't until her third year that she met a computer researcher at the same university, Jessica Colaco, who says she bumped into Oguya in the hallway. "I remember when I met her in the corridor, Susan was really shy. She was like, 'Excuse me, are you Jessica Colaco?' " she says.

"So she invited me and was like, 'Come meet other women who also have a passion like you, but they want to relate to other women who don't know that this exists,' " Oguya says.

Oguya started spending some Saturday mornings with Colaco and other women, snipping code and poring through hacker cookbooks. These informal gatherings became the Akirachix.

Oguya graduated and turned her mobile phone idea into a company called M-Farm. At 25 years old, she now has a staff of 18. And 7,000 African farmers use her app.

One floor up from Oguya's office is a kind of oasis of geekdom — a gathering space for Nairobi's tech community called the iHub. It feels like any sort of hacker space in Silicon Valley or New York, with comfy couches, fast Wi-Fi and cappuccinos served by a barista named Miss Rose.

But the techies you meet here aren't trying to come up with the next Facebook or another app to share your photos. They're solving local problems.

There's one app that brings math and reading help by cellphone to village schools.

There's an app that lets Kenyans who don't have computers do their online shopping by cellphone.

There's a micro-insurance product that measures the rainfall at cellphone towers and automatically distributes money to farmers in drought.

These are all applications started by women. Akirachix's Owigar says they're sending a message to the next wave of girl geeks. "We need them to see that we are doing it and we enjoy it. You know, you don't find many African women looking for the spotlight. Most of them tend to hide their awesomeness," Owigar says.

The best time to carve a spot for women in geek culture, she says, is when there isn't much geek culture yet.