Accessibility links
This Defense Contractor Has A Green Side : All Tech Considered AeroVironment has an unusual combination of products — military drones and electric vehicle chargers. The company's president acknowledges that some workers are uncomfortable with the company's dual interests, but he doesn't see a conflict. 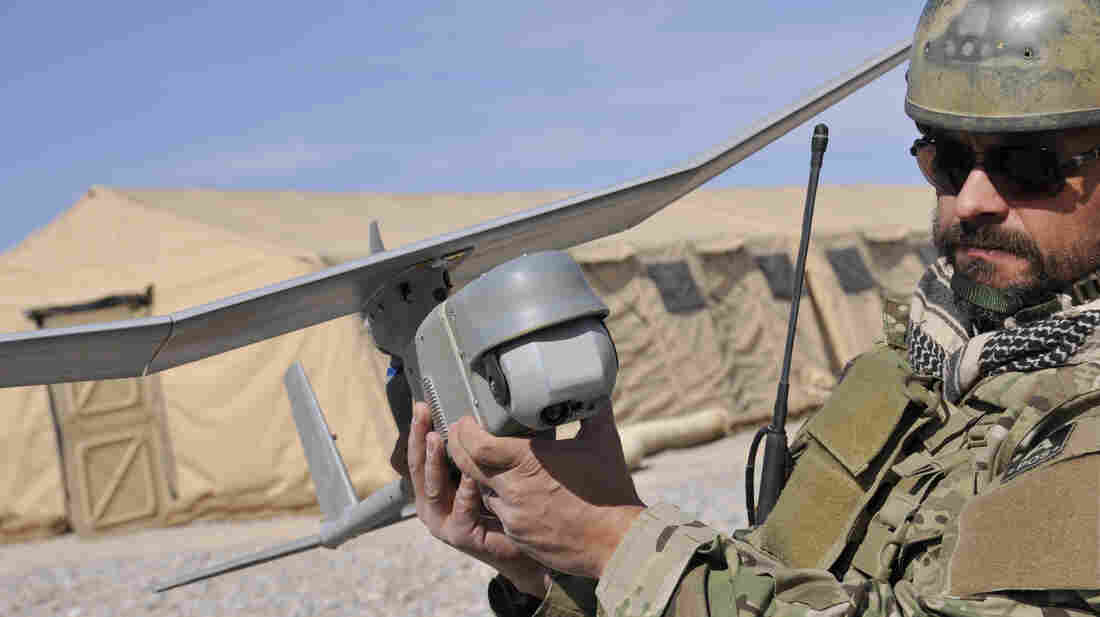 AeroVironment's Raven drone is used for military surveillance and can be launched by hand. Courtesy of AeroVironment Inc. hide caption 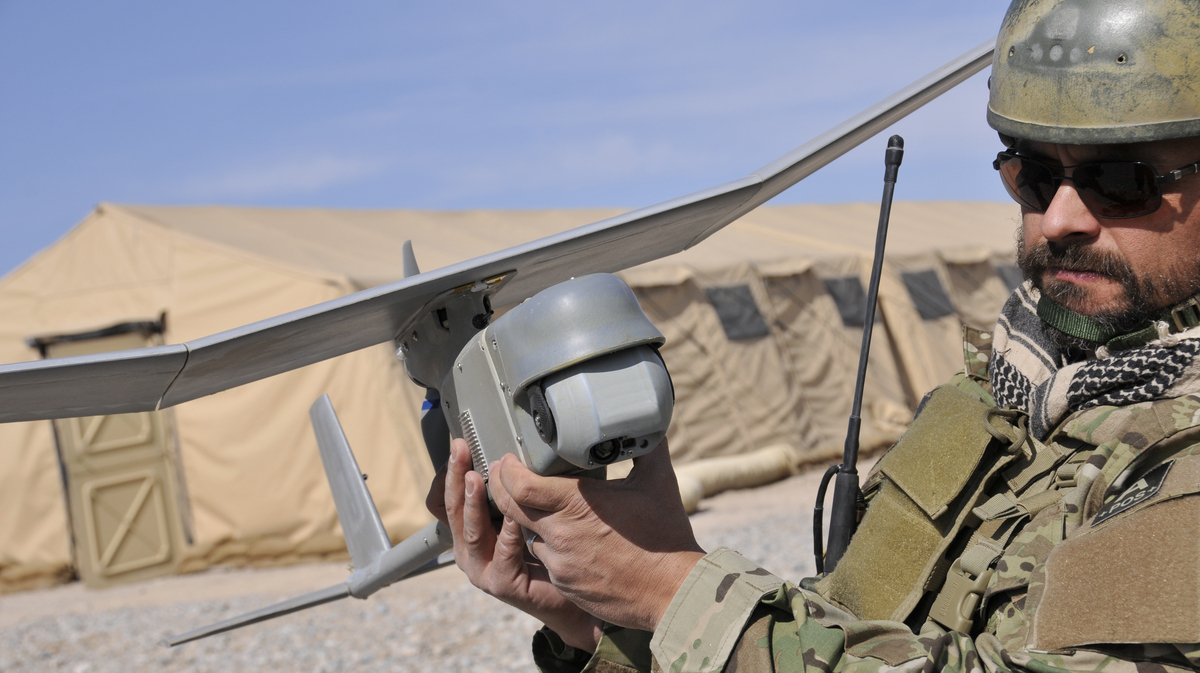 AeroVironment's Raven drone is used for military surveillance and can be launched by hand.

Lots of companies make products that don't have much in common, but AeroVironment specializes in two products that are very different — electric vehicle chargers, which keep cars like the Nissan Leaf on the road, and military drones. The Los Angeles-area firm is a leading manufacturer of small unmanned aircraft.

This unusual company was the creation of one unusual individual, Paul MacCready. He loved things that fly. "As a youngster, I was very interested in model airplanes, ornithopters, autogyros, helicopters, gliders, power planes ..." MacCready said at a TED conference in 2003, four years before his death.

Tesla Revived The Electric Car, But Can It Sell It?

But as obsessed as he was with flying things, MacCready never wanted to break the sound barrier like Chuck Yeager or buzz the control tower like Tom Cruise's character, Maverick, in Top Gun.

MacCready loved nature, and his dream was to create birds — or re-create them. He founded AeroVironment in 1971 with that in mind. His designs were very light and flew incredibly slowly, with just enough power to stay aloft. 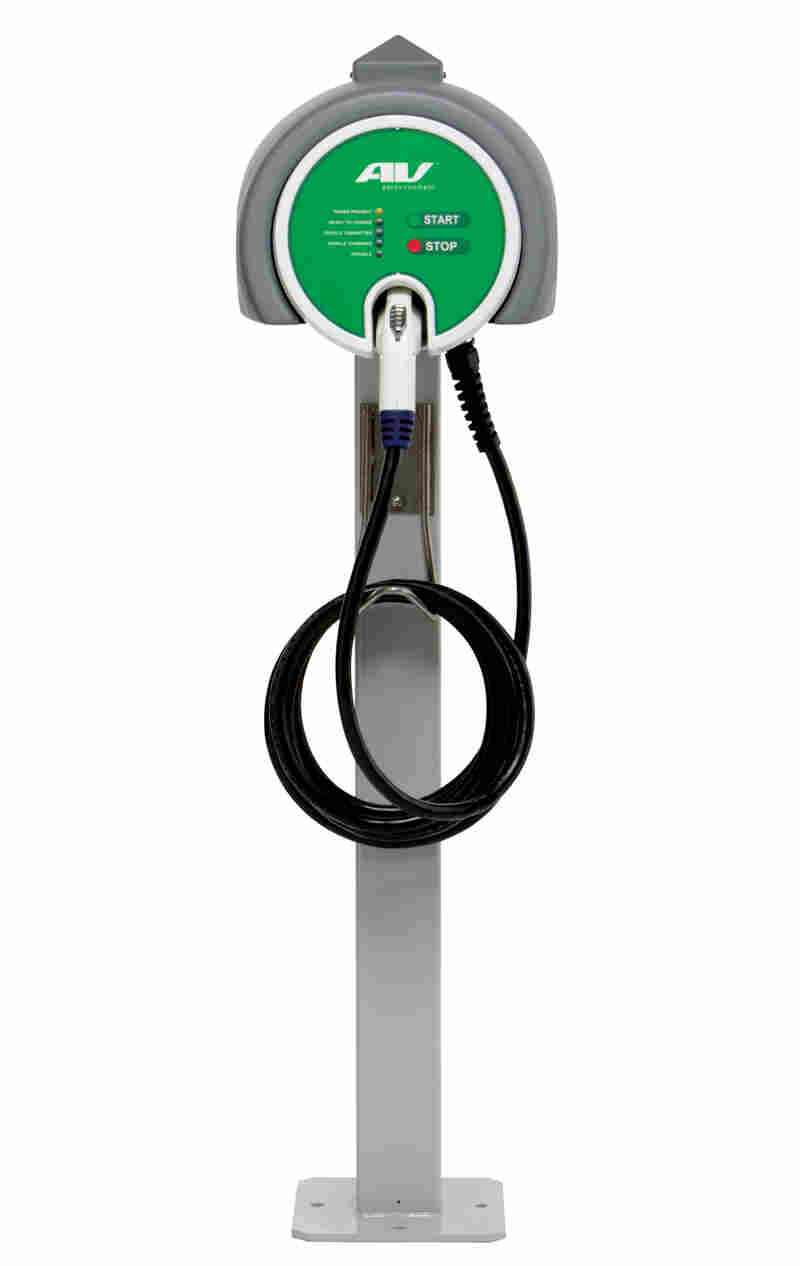 But passion and interest don't always make money. And MacCready found himself in debt, to the tune of $100,000. "And I noticed that the Kremer prize for human-powered flight was 50,000 pounds," he said in that same speech. "The exchange rate was just about $100,000, so suddenly I was interested in human-powered flight."

The result was the Gossamer Condor — the first controllable human-powered aircraft. That meant a pilot actually pedaled MacCready's ultralight plane through the air.

You will also notice the company's fondness for ornithological nomenclature. Marine Sgt. Michael Sustad trained on the Raven in Afghanistan. "It has cameras, GPS, so, that when it comes back, we can brief our commanders on what's going on in that location," he says. And, it's so small you can launch it with your bare hand.

Roger Khourey is a senior electronics engineer with AeroVironment in California. He works in what is essentially an airplane hangar outside Los Angeles, but he doesn't work on planes or anything else that flies. He's testing AeroVironment's other specialty — electric vehicle charging stations made to line U.S. highways.

The difference between his company's products doesn't escape him, "One flies and the other doesn't," Khourey says.

The core technologies of the drones and the electric vehicle chargers are actually the same, though, and that means engineering staff can move from one side of the company to the other.

And Department of Defense contracts pick up the tab for all kinds of new research and development, including the Switchblade — the first hand-held drone that spies and shoots.

When production began, Tim Conver, the company's president, says, he had to sit the staff down for a little talk. "And I think a lot of individuals that initially were a little taken back — 'What are we doing making weapons systems?' — either got comfortable with it or, in some cases said, 'You know ... I don't want to work on that program. I'm fine with us doing it, but I don't want to work on it myself.' "

"I understand that it's conventional wisdom you have defense and you've got environment here, but, as you can see, I don't see any inherent conflict," he says.

Drones make up over three-quarters of AeroVironment's revenue, and the industry is moving at a quick pace with over 4 percent annual growth projected over the next 10 years. The future of AeroVironment's electric vehicle charger business is less predictable and will depend on U.S. demand for electric cars.