Accessibility links
E-Readers Track How We Read, But Is The Data Useful To Authors? : All Tech Considered Data is being collected about your reading habits — what kind of books you read, whether or not you finish them. Publishers say the information could improve how books are written, but some novelists are skeptical. 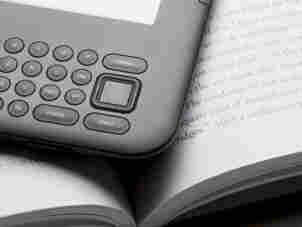 Data gleaned from e-readers gives writers a new kind of feedback to take into consideration — or ignore. iStockphoto.com hide caption

Reading always seemed to be the most private of acts: just you and your imagination immersed in another world. But now, if you happen to be curled up with an e-reader, you're not alone.

Data is being collected about your reading habits. That information belongs to the companies that sell e-readers, like Amazon or Barnes & Noble. And they can share — or sell — that information if they like. One official at Barnes & Noble has said sharing that data with publishers might "help authors create even better books."

The data is also, of course, a brilliant marketing tool. Best-selling author Scott Turow says e-readers can collect a lot of information about their owners.

"You can tell everything about how somebody reads a book," says Turow, "whether they are the kind that skips to the end, how fast they read, what they skip ... So [data from e-readers] can give the author specific feedback. You know, '35 percent of the people who bought this book quit after the first two chapters.' "

Turow, who is also president of the professional society The Authors Guild, says this kind of information can be very useful to a writer.

"I would love to know if 35 percent of my readers were quitting after the first two chapters," Turow says, "because that frankly strikes me as, sometimes, a problem I could fix. Would I love to hitch the equivalent of a polygraph to my readers and know how they are responding word by word? That would be quite interesting."

There's no question that writers are keenly interested in how readers respond to their work, says novelist Jonathan Evison. But, he says, that doesn't mean a writer wants to tailor his work just to please the reader.

"I'd be lying if I said I wasn't thinking about the reader all the time. I always think about the reader," says Evison. "I'm trying to create an effect for the reader, and sort of engage them in a sort of collaborative dance ... But I'm still trying to be the leader."

The idea that data collected from e-readers might be used by publishers to improve a writer's work strikes Evison as wrong. It feels like creating by committee, he says, and reminds him of the days when he worked in commercial radio and met with general managers and program directors.

"When I was in commercial radio, the GMs [general managers] and the PDs [program directors] would sit me down and they'd show me thick packets of research that were all demographics: 'With focus groups, we did studies ... These are the 100 songs we want you to play because these are what people like best. And this is what we want you to talk about, these are the evergreen subjects, like, people like topical.' They would tell me all this, and what would happen is ... my show started to lose its voice."

What would have happened, asks Evison, if this kind of research had been around when some of the world's greatest and most challenging books were written — War and Peace, Ulysses, Moby Dick?

'Moby Dick' is one of my favorite books, but let's face it — it's a hot mess. If I had software that said, 'Look, maybe this four-page essay on scrimshaw isn't gonna fly with your 28 to 40 male [demographic],' what would we have lost with that?

"Moby Dick is one of my favorite books, but let's face it — it's a hot mess," says Evison. "If I had software that said, 'Look, maybe this four-page essay on scrimshaw isn't gonna fly with your 28 to 40 male [demographic],' what would we have lost with that? Sometimes, you know, it's just got to be a little bit of a dictatorship."

There is nothing collaborative about writing a novel, says Turow: It is one person's vision. On the other hand, he says, it makes sense for publishers to try to figure out what readers want. After all, publishers are trying to make money.

"There's a certain logic to that from the business side," Turow says. "Why should we publish this book if 11 readers out of 12 can't make it past page 36? But the 12th reader may be more discerning in her tastes, and it could turn out that what the people are thumbing their nose at is Ulysses or the novels of [William] Faulkner."

Of course, there are different kinds of novels. Turow writes best-selling legal thrillers. Jennifer Egan writes literary fiction. In her most recent book, A Visit from the Goon Squad, Egan played with the form of the novel. And although it was commercially successful and critically well-received, Egan says she knows that for some readers, the novel just didn't work.

Pulitzer Prize-winning writer Jennifer Egan says that while she finds market research like e-reader data "interesting," she does not incorporate it into her creative process. AP/Pulitzer Prize Board hide caption

"When I hear that someone couldn't connect with Goon Squad, I really do feel I failed that person," Egan says. "I don't at all subscribe to this idea that they just 'didn't get it.' And I'm sorry about it. That being said, I think it is silly and kind of childish to expect to write a book like Goon Squad, which is idiosyncratic, does not follow a lot of the narrative conventions we've come to expect from contemporary novels, is not straightforward — I think one can't do all that and expect to be loved by everyone."

Egan suspects that information drawn from an e-book would show that a lot of readers skipped over one chapter in particular, which was written as a PowerPoint presentation.

"While I respect the opinions of those who didn't connect with that PowerPoint chapter and I really am sympathetic as someone who is kind of alienated by PowerPoint," Egan says, "I believe that chapter is the heart of the book. And I think without it, the experience of the book is not complete. And I say that knowing that many people were alienated by it. And I guess this speaks to the question of how important market research really would be for me as a creative person ... [It's] interesting to know, but should not really be predictive or part of the creative process."

And anyway, Egan says, she doubts Faulkner would have changed one word of Absalom, Absalom! on the basis of market research.

America's Facebook Generation Is Reading Strong Oct. 23, 2012
Libraries Grapple With The Downside Of E-Books May 29, 2012
Microsoft, Barnes & Noble Take On Digital Rivals May 1, 2012