Accessibility links
As 3-D Printing Becomes More Accessible, Copyright Questions Arise : All Tech Considered A 3-D printer allows people to easily create Yoda busts, Tintin's rocket ship — and even NPR action figures. But as this technology gets cheaper, the budding industry could face the same intellectual property battles that upended the music business a decade ago.

Many people think 3-D printing could help spark a manufacturing renaissance in the U.S. — even President Obama highlighted this technology in his State of the Union address last week.

But as 3-D printers and 3-D scanners get cheaper, this nascent industry could be roiled by battles over intellectual property.

Not so long ago, a good 3-D scanner that could create accurate digital models of objects in the real world cost more than $10,000. Then, Microsoft released the Kinect — the video game controller that allows you to play games by just waving your hands.

"But it turned out that the Kinect was actually much more than that — it was a 3-D camera but one-hundredth of the price," says Nicolas Burrus, co-founder of manctl, a 3-D scanning company.

Burrus was working on computer vision research at a university in Spain when the video-game system technology came out. "We knew that this could change everything because anyone could just start scanning," he says.

His company makes software that turns the Kinect into a cheap, high-quality 3-D scanner, so we conducted a little experiment.

We decided to scan NPR correspondent Lauren Frayer (who helped me record Burrus in Spain, and ended up as the project's guinea pig).

Holding a Kinect, Burrus scanned Lauren. It collected 3-D data and images, and his software began to stitch everything together into a detailed 3-D model of Lauren — right in front of her eyes.

"Oh, gosh, I should fix my hair — this is why I do radio," Lauren said, laughing.

In just a few minutes the scan was complete. Burrus emailed the file, and the next day — almost 6,000 miles away — I walked into TechShop in Menlo Park, Calif., borrowed its 3-D printer, and NPR's very first action figure was produced.

Printing a Susan Stamberg, Nina Totenberg or Guy Raz action figure wouldn't be so hard, either.

Creating these characters would be dead simple. The scanning and printing technology is designed for consumers, and it's getting much cheaper.

The Makerbot 3-D printer we used cost less than $2,000. And the maker of Kinect's 3-D camera just unveiled a new version tiny enough to go in an iPad.

"We are at the point now with physical objects that we were at with MP3s a decade ago. ... We are now at that point with stuff. I think it's fantastic," Lambert says.

I caught up with Makerbot founder Bre Pettis at this year's Consumer Electronics Show. He says this type of technology will keep advancing, and everyone will have a chance to experience the phenomenon.

"We are going to see more and more applications built that are going to allow you — people who don't necessarily know how to do digital design — to be empowered to make the things that they want, just the way they want them," he says.

When asked about digital copyright and digital piracy bleeding into the material world, he didn't answer.

But Lambert says intellectual property could be a big problem. "It is a huge question. It really is," he says.

Makerbot runs a website called Thingiverse where people can share their digital designs for 3-D printers. It turns out a lot of the items people are designing, copying and printing on Thingiverse — like Star Wars action figures or Pixar's famous lamp — are actually protected by copyright. 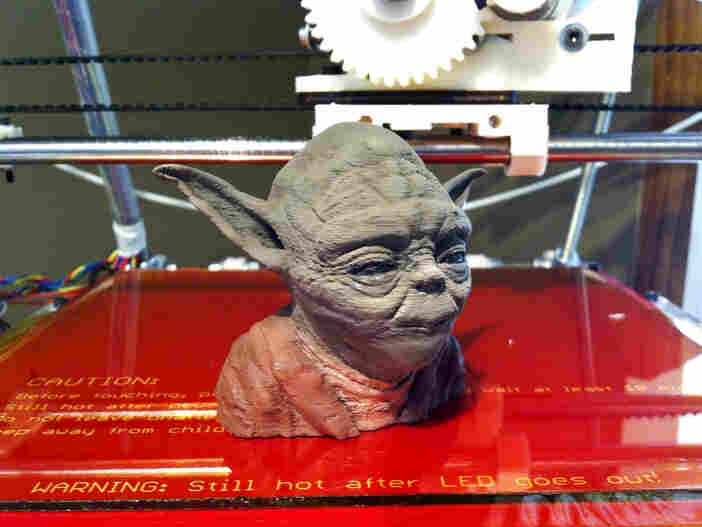 A 3-D printed bust of Yoda is one of the more popular digital designs shared on Thingiverse. Courtesy of StruveDesigns.com hide caption 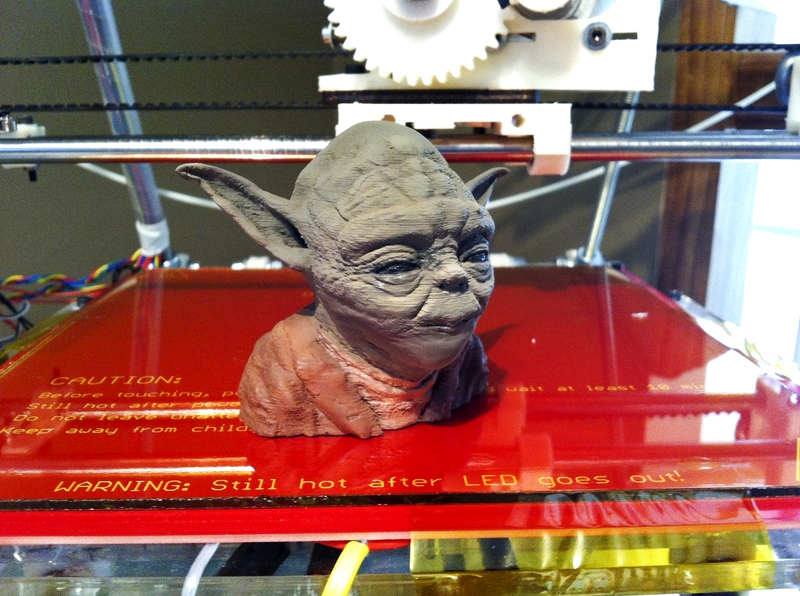 A 3-D printed bust of Yoda is one of the more popular digital designs shared on Thingiverse.

One of the more popular things on the site is a bust of Yoda, and some designers on Thingiverse are doing amazing things with it. Someone turned it into a vase for flowers, another used math (fractals) to hollow it out in an incredibly beautiful, illegal way.

"Yoda is not just something we can copy and duplicate — Yoda is protected by copyright," says Michael Weinberg, a lawyer at Public Knowledge, a group that advocates for an open Internet.

He recently wrote a couple of white papers on 3-D printing, copying and the law. He says even when designers take an object like that and change it, it's still legally protected.

"That at least triggers a copyright analysis," he says, "so the question is sort of twofold."

The first question that arises is copyright violation, Weinberg says. Someone might be worried about copyright infringement when creating some incredible Yoda bust. But the real question is how the owners, Lucasfilm and Disney, react to that, he adds.

So far, the two companies haven't done anything. But the era of benign neglect on Thingiverse may be coming to an end.

'Sue The Genie Back Into The Bottle'

Weinberg says Moulinsart was well within its legal rights, but he thinks the move was a mistake. People printing out copies of Tintin's rocket were the company's mega-fans, he says. Instead of attacking them, Weinberg adds, the company would have been better off selling digital designs to print out Tintin himself.