Accessibility links
Could This Robot Save Your Job? : All Tech Considered Baxter can work alongside humans to do simple, repetitive tasks. Some analysts fear such automation will kill jobs but Baxter's inventor says such robots could keep the U.S. competitive. 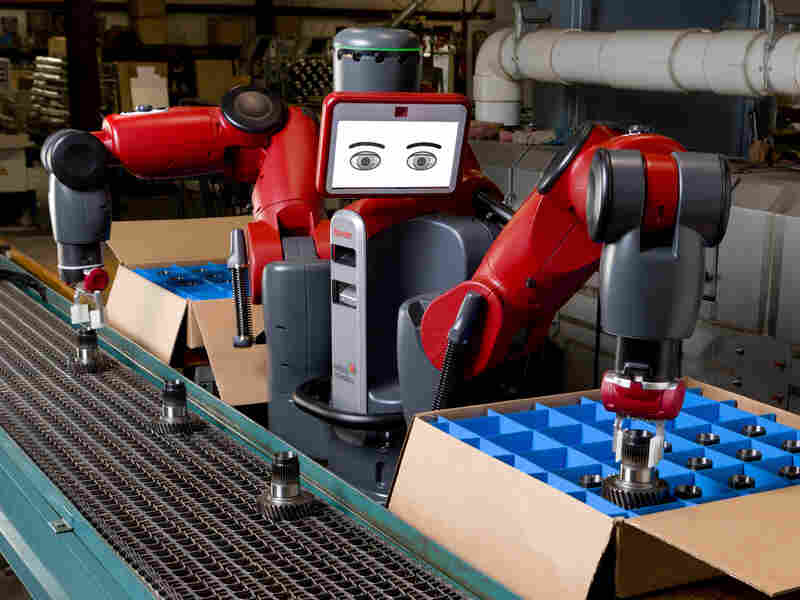 Baxter is billed by its makers as a "collaborative manufacturing robot." It can work alongside humans to do simple, repetitive tasks. © Stephen F. Bevacqua/Courtesy of Rethink Robotics hide caption 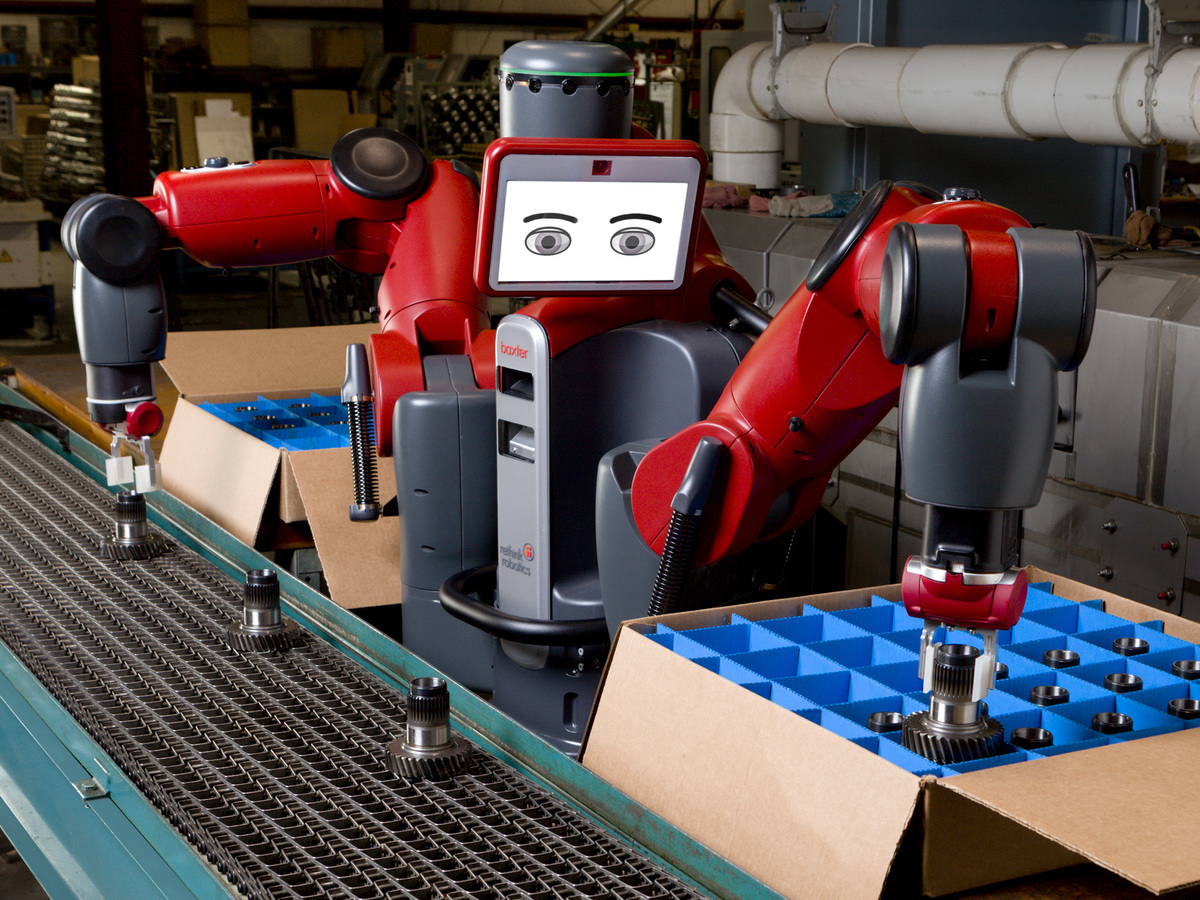 Baxter is billed by its makers as a "collaborative manufacturing robot." It can work alongside humans to do simple, repetitive tasks.

The man who invented Roomba, the robotic vacuum, is back — this time, with Baxter. Rodney Brooks, roboticist and entrepreneur, brought Baxter, his latest robot, to the TED conference in Long Beach, Calif., last week.

Brooks' latest company, Rethink Robotics, describes Baxter as a collaborative manufacturing robot. Brooks showed how Baxter, which costs $22,000 per model, can work alongside humans — not replace them — to do simple, repetitive tasks.

Brooks is the Panasonic Professor of Robotics (emeritus) at MIT, where he also used to run the Computer Science and Artificial Intelligence Laboratory. His idea is that Baxter can help, for example, aging factory workers do their jobs more efficiently. He told the TED audience that after this generation ages out of factory work, they tell him, they don't want their children to carry on their work.

Baxter has eyes for feedback. Though its eyes don't see you as a person, they serve as a signal as to what it'll do next.

Normally robots need to be programmed, but this one learns by physical training. Move Baxter's arm and it learns that's how it should move its arm. In just a few minutes, the robot can be taught, for example, to take something out of a box and place it on a conveyor belt, then, after it's assembled, put it back in a box.

Brooks explains that Baxter is a robot that learns, versus robots designed to do specific tasks, like ones that might be seen on an automotive production line.

Brooks says that as oil becomes more expensive and the cost of shipping products manufactured abroad increases, Baxter is the kind of tool that could help bring factory jobs back by increasing productivity on the production line.

As The Washington Post's Cecilia Kang notes, Baxter is one of a new generation of robots being deployed by U.S. companies:

"General Electric has developed spiderlike robots to climb and maintain tall wind turbines. Kiva Systems, a company bought by Amazon.com, has orange ottoman-shaped robots that sweep across warehouse floors, pull products off shelves and deliver them for packaging. Some hospitals have begun employing robots that can move room to room to dispense medicines to patients or deliver the advice of a doctor who is not on site."

Andy McAfee, a fellow at MIT's Sloan School of Management, says companies are getting more productive without having to hire more workers. He wonders whether the "combination of fast automation and relatively slow GDP growth" in the U.S. could lead to cuts in U.S. jobs and in hours worked by humans, Kang reported.

"But the International Federation of Robotics said in a study last month that paid employment has increased in countries that are the biggest users of industrial robots. For all the jobs lost in manufacturing, others have to be created in distribution and services, the report says."

When A Robot Comes Knocking On The Door

According to Brooks, Baxter is not a threat to human jobs, as there are certain tasks that are hard for a robot to do that a human can do better — things like quality assurance or small assembly where things like sensing tension are important.

In Brooks' world, the robot can do the mundane, repetitive tasks, the human can do the tasks it excels at, and together they are more productive.

And Baxter can also be used outside the factory, doing things like helping caregivers and the elderly do daily tasks. Brooks describes a future in which a robot like Baxter that is easy to control and teach can give not just factory workers a hand but elderly people dignity as they age and a hand when they need one.