Accessibility links
Can 'Smart Gun' Technology Help Prevent Violence? : All Tech Considered What if a gun could only be fired by its rightful owner? What if it recognized a grip or fingerprint, or communicated with a special ring? It's been a fantasy for years, and in the wake of the Sandy Hook tragedy, so-called smart gun technology is back in the spotlight. 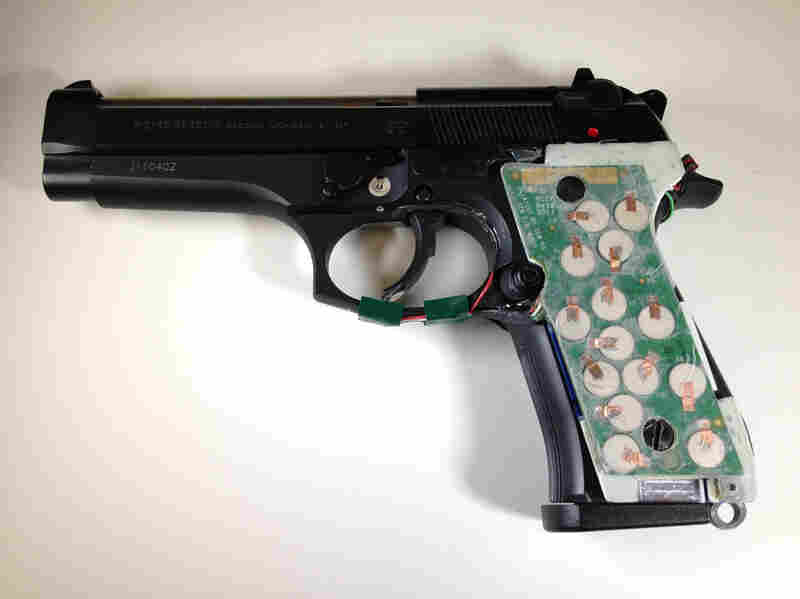 This 9 mm semi-automatic handgun is configured with transducers in its handle that can detect the grasp of an authorized user. New Jersey Institute of Technology/AP hide caption 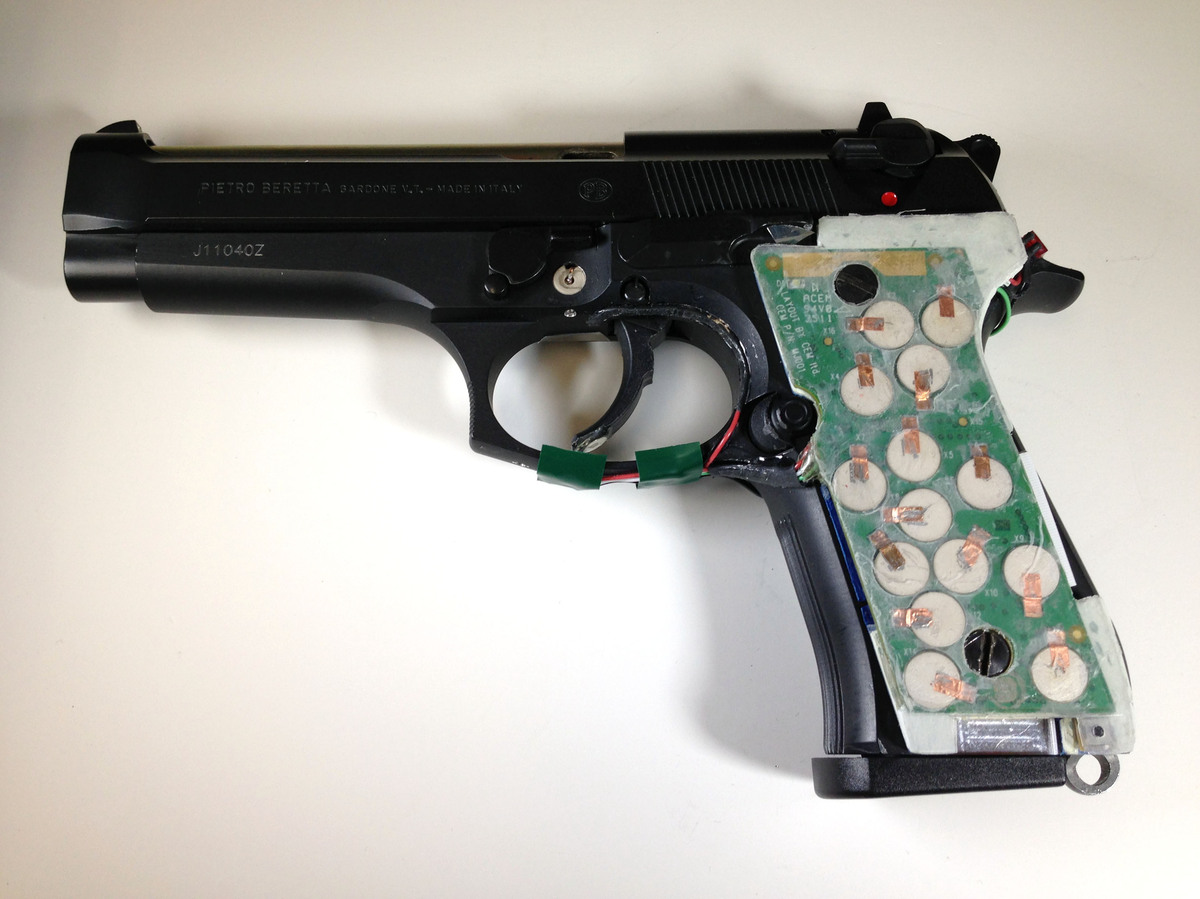 This 9 mm semi-automatic handgun is configured with transducers in its handle that can detect the grasp of an authorized user.

For years, many have dreamed of so-called smart guns, weapons that know their rightful owner and won't fire in the wrong hands. Think James Bond's gun in Skyfall.

A few major gun makers experimented with smart guns in the 1990s, but none came to market. Since then, it's been the domain of entrepreneurs and inventors.

Jonathan Mossberg's company developed what he calls the iGun. It fires only if it recognizes a ring on a finger. The ring has a black square made of onyx and contains codes that identify the owner.

The gun looks for the RFID tag in a ring, bracelet, or, if this isn't too science fiction for you, it's embedded under your skin.

"It's about the size of a grain of rice," McNamara says of the tag. "It's that small, and they just inject it under the skin."

A German company called Armatix plans to release a gun in the U.S. that uses fingerprint scans or communicates with a wristwatch.

Donald Sebastian and his team at the New Jersey Institute of Technology took a different approach, creating prototype guns that record the unique way you grip.

"While you're pulling the trigger, you are applying a dynamically changing pattern of pressures onto that stock of that gun, and that's what is actually individual to you and reproducible shot after shot," Sebastian says.

But for all the time and money spent on smart guns, developers say their technology has, until now, mostly sat on a shelf.

"It's only been [the] lack of demand that has kept us from going any further," says Mossberg of the iGun.

But that all changed after the mass shooting at Sandy Hook Elementary School in Newtown, Conn.

Stephen Teret has waited for this moment for decades.

"I first started thinking about personalized gun technology when a young child, who was the child of a friend, was killed by another young child," Teret says.

That was about 30 years ago, and it led him to found the Johns Hopkins Center for Gun Policy and Research. He thinks smart guns could reduce youth suicides, accidental shootings and deaths from stolen weapons.

"We have a technology that will prove to be a lifesaving technology," he says. "We need to get it into guns. There's politics that have prevented that from happening, but we've got to get beyond those politics."

Yet for all the attention personalized guns are getting now, few experts think this technology could have prevented a tragedy like Newtown.

"The majority of mass shootings in this country are committed with legal weapons, and the person firing the gun is the owner of the gun," says Josh Sugarmann, executive director of the Violence Policy Center, a group that pushes for gun control.

He says few of the more than 30,000 annual gun deaths could be prevented by smart guns. There were just 606 unintentional firearm deaths in 2010.

He worries that if these high-tech weapons became available, more people would choose to own guns.

Both Sides Of The Argument

All this puts him in surprising agreement with the National Shooting Sports Foundation, the trade association for the firearms industry.

Both Sugarmann and Keane wonder if someone like Adam Lanza would have been an authorized user on a smart gun, defeating the purpose.

It might not prevent all violence, proponents say, but smart gun technology is like a seat belt — it makes guns safer.

A group called The Sandy Hook Promise, which includes families of the victims, met with venture capitalists and technologists in San Francisco last week. They want to push more smart gun development.

And with Obama focusing on gun safety, smart gun developers believe this is their moment. Sebastian, of the New Jersey Institute of Technology, had all but given up development a few months ago. Now, he thinks they could soon be on the market.

"I think it could happen within two years," he says.

Maybe then, we'll find out if Americans actually want their guns to be smart.